Topps issued a set of cards in 2006 that used the front and back design of the 1952 Topps set. There was a signature series in that set that included Pittsburgh Pirates pitcher Josh Sharpless, who made his big league debut during the 2006 season. These cards were issued late enough in the year that the back included some info from the 2006 season.

Sharpless is one of two former Pirates players born on January 26th, and he’s the only one of those two with a Pirates card, so I was a bit surprised to find out that this is his first appearance in a series that started 34 months ago. With that I say, welcome to the Card of the Day series Josh Sharpless, who is celebrating his 42nd birthday somewhere. 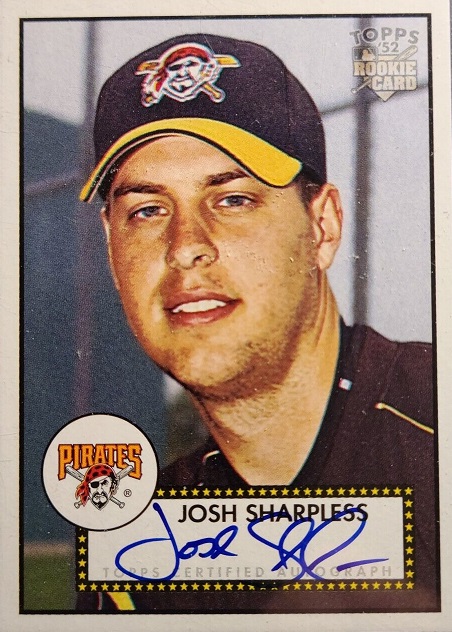 This is a really interesting image of Sharpless. If you search through his cards on Ebay, and there are not a lot available, you will find this image cropped different on another 2006/1952 retro card, as well as on a 2006 Bowman card. I actually like the others better, not a real fan of close cropped photos like what you see here, but I wanted to feature the signature series card.

You have the old school look here, along with the 2006 version of a modern logo in place of the great one featured on the 1952 Topps cards (here’s an example from an old article). The difference being that the 1952 cards has some issues with the logo coming out less sharp on some cards, so you get what you see in the link above. Topps had quality control down a bit better 54 years later. 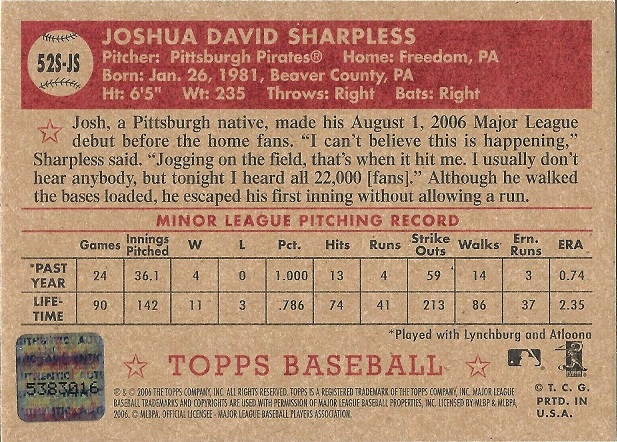 This scan is what you see on the back of these autographed cards, though this back doesn’t match up to the front scan. The back scan on that one was less sharp than I like, so I found another. The only difference here being the number on that authentication sticker doesn’t match up to the front scan. The autograph actually looked a bit different on that one as well, but I guess not all autographs are created equal when you’re doing a large quantity of them at one time.

As you can see in the little bio section, he mentions his big league debut on August 1st. That right there tells you that these cards came out late in the year. The minor league stats you see are from the 2005 season. He pitched 27 innings that year with High-A Lynchburg without allowing an earned run. He then gave up three runs over 9.1 innings with Double-A Altoona, before an elbow injury shut him down for the season.

If you are interested in purchasing one of these cards, put down the hammer. You don’t have to break that piggy bank to pay for it. Just check the couch cushions for about $3-$5. These cards aren’t easy to find in general, but someone like Sharpless isn’t highly collectible unless you’re trying to put together the set, or grab autographs of all Pirates players. Maybe you live in Pittsburgh an like local players. He definitely qualifies for that. There are 12 copies of this card on Ebay, priced up to $16.25, though that high one does have a make offer option. I highly doubt they will take $12 off the price to make it reasonable. None have sold in the last three months.