Shortly after the Pittsburgh Pirates signed veteran outfielder Andrew McCutchen, bringing him back to his original team, I decided to add him to the Card of the Day calendar. Today was a great day to take a look at his card. The history article for today’s date is one of the slower ones throughout the year. It has just two players and two transactions of note, and neither of the players involved in the transactions has a Pirates card. The players each spent one season with the team. That didn’t leave many card choices to match up to the daily history article, but that’s not actually a requirement here, just a preference.

Since McCutchen is returning to his baseball roots, I decided to feature one of his rookie cards. Today’s card is from the 2005 Bowman Draft set. This card has a pair of photos showing the 18-year-old outfielder, shortly after he was taken 11th overall in the draft out of Fort Meade HS. It’s a card that was extremely popular during his peak performance, but the prices have cooled off a bit as his career winds down, making it a great time to pick up an example of an all-time Pirates great. 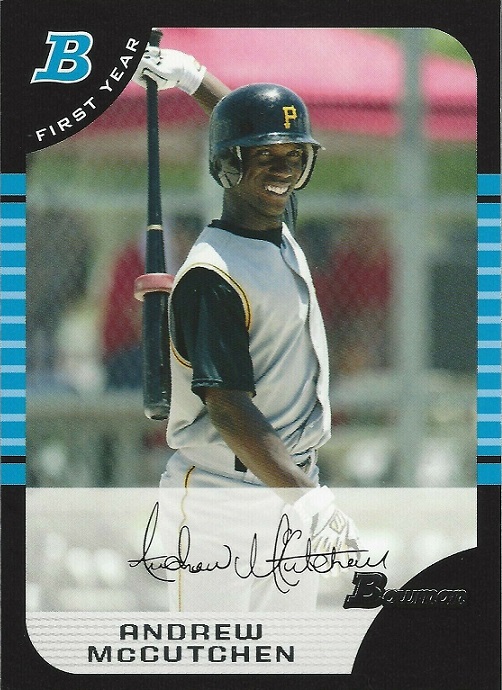 I don’t remember seeing the Gulf Coast League players wear plain jerseys like that without writing across the front, but then again, you weren’t seeing many pictures from the GCL around this time or before. Those players look just like regular Pirates players now, which has to be a cool feeling when you’re starting out so low in the minors. This is a great shot of McCutchen, with that signature smile already. Nowadays Bowman will put uniforms on players who they are missing pictures of in uniform, but this appears to be a real unedited picture (I could be wrong).

I like the design here, even if his name looks like it was written on a 1980s computer. The autograph is a facsimile on the card, with Bowman stating on the back that it was pulled from his rookie contract with their company. I like how they made that little area transparent, so you still see part of the photo, but the autograph still stands out. 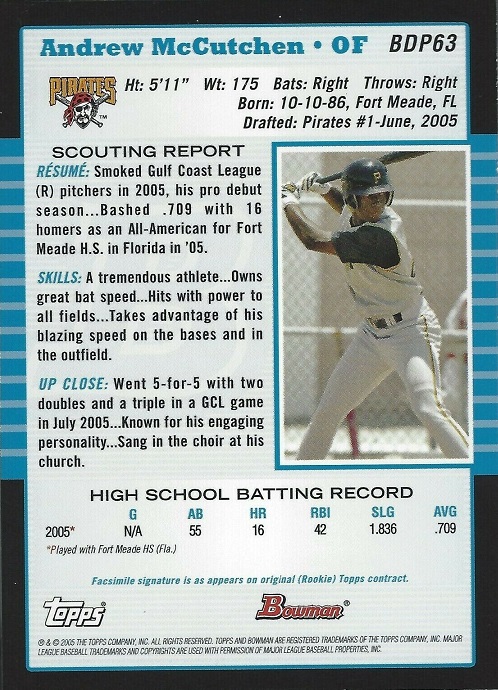 The backs of these cards are amazing. You get a second photo of the player, their available stats, as well as bio info and scouting reports. Good call there in the up close section, stating that McCutchen is “known for his engaging personality”. That checks out. There was no Pirates logo on the front, but you get that here on the back in the top left corner.

I forgot how good those high schools stats were, which had to make it tough to judge him against mediocre at best pitching. A lot of high school hitters do well, but kids in sections of California, Texas, Georgia (baseball hotbeds) can hit half what he did there and be legit top notch prospects. Scouts look for tools though, and they were all there at a young age. I saw him in 2006 collect two hits in a four-game series and neither was hit well. One was a roller up the middle, the other a high chop to third base. You could see all the tools were there though.

If you’re interested in buying one of these, you can get them around $5 each, with a few examples in that price range. There are gold border and chrome versions that go for a few bucks more. There’s a graded one for $20 that is a PSA 8, which you’re mostly paying for the holder in that case, because most examples you’ll find are at least in that same condition. There are other cards graded by lesser grading companies for around the same price, but I’d stick with just getting a nice raw one in this case. Check the scans in the $5 range and you should be able to pick up a great looking copy.