January 12th is an odd date in Pittsburgh Pirates history. A total of eight former Pirates players have been born on this date, and yet there is almost nothing available when it comes to cards showing them on the Pirates. Today’s Card of the Day selection comes from a player who wasn’t even mentioned last year on this date, and now he’s already a former Pirates player this year. That earned him a full bio in today’s history article AND he gets a Card of the Day article on the same day. Someone is getting special treatment on their 34th birthday!

Jose Quintana signed as a free agent with the Pirates prior to the 2022 season. He was coming off of a very poor 2021 season, an injury that cost him most of 2020, and a mediocre 2019 season. He was slated to be a starting pitcher, but the expectations were low. He ended up posting a 3.50 ERA in 20 starts, which made him an intriguing trade piece for teams at the trade deadline. By August 2nd, his time with the Pirates was done. This card came out during the 2022 season in the Topps Update set, so plenty of people were getting this card in packs when he was already on the St Louis Cardinals. 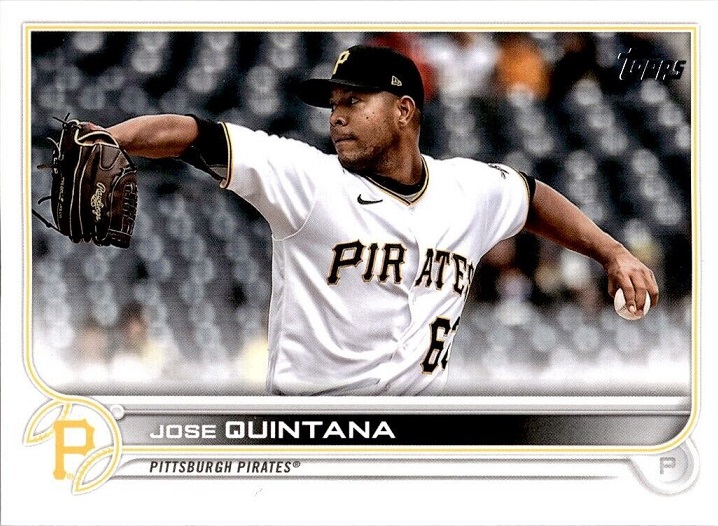 I have to admit that I don’t pay much attention to newer cards, other than the Living Set and Bowman Draft cards, but I like this particular card. I say it a lot, but putting a player on a horizontal card layout in a set that doesn’t use that layout works 99% of the time. However, I like the design around the photo and the use of team colors, so it’s not just the horizontal look that does it for me here. The logo in the bottom is a great touch, because it looks like they just put loops there as part of the design around the photo, but then you look at it longer and see it looks just like a partial baseball, with the logo on the sweet spot. You don’t have many options if you want a Quintana card on the Pirates, but do you really need any others with the look of this card (not to mention the laundry list of variations you’ll see in the pricing section below). 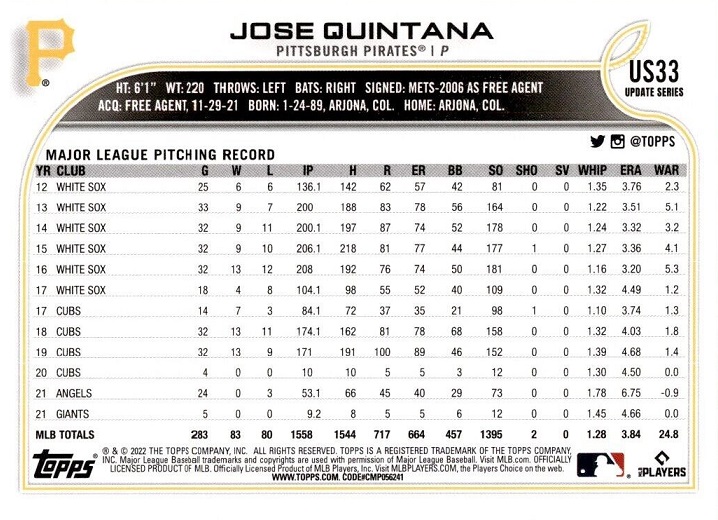 The back has the same looking design around the stats as you see around the photo on the front. They added a second Pirates logo with an interesting shadow effect. The black writing on a white background is ALWAYS appreciated, especially when someone has played as long as Quintana. The back looks a little more plain than the front, but I’m okay with the back being all business (aka focus on the stats).

There are quite a few variations of this card, but I’ll only give the price of the ones currently available on Ebay. If you just want the basic no frills version, it’s one of those cards you shouldn’t pay more than $2 delivered, but some sellers will charge more for their copies. There’s a variation called vintage stock, which has 99 copies available. Two are on Ebay and both sellers want over $20. There’s a black border variation numbered to 71 copies and that one is a few bucks cheaper (one is $11 and another is $15), with six copies available. While I don’t go for chase cards, this one is actually really nice looking. There’s a mini red border version, with only five copies available. That one is going for $20 as well. There’s an orange foilboard with 299 copies and a $20 price tag, though you should be able to find that much cheaper. There’s a Father’s Day blue border version, numbered to 50 copies, which is $13-$15. Not to be confused with the blue parallel, which is much cheaper ($5 or less).

There’s an aqua version numbered to 250 copies, which is $10. There’s an Independence Day version, with 76 copies (cool idea) for $8-$10. There’s a purple chrome version for $8. A green ice parallel is $7, and a gold version, which is numbered to 2,022 copies, tops out at $7, but you can get it cheaper. There’s a rainbow foil for $7 delivered. A chrome version of the base card can be had for $6 or less. A red border, limited to 199 copies, can be had for $5. There’s even a pink wave chrome for $3. I have no idea why they make so many different chase card, but it must be popular. Basically, you have a ton of options, some of them very rare and expensive for a 2022 card of a common player.