Today’s Card of the Day player comes from one of the eight former Pittsburgh Pirates born on January 23rd. Benny Distefano played for the Pirates during the 1984, 1986 and 1988-89 seasons. He got into 188 games during those three years, but it was three of those games that make him a major footnote in Major League Baseball history. He caught a total of six innings off of the bench in 1989, making him the last left-handed catcher in big league history. Just as a side note here, which does not take away from his work. I’m a lefty and I caught a game in Little League after his final game, so there should be an asterisk with his accomplishment.

Today’s card selection is perfect to recognize Distefano for his accomplishment. I picked the 1990 Fleer set for him because it was different from all of the other Pirates cards available for him, as you will see in the photo below. This is the second appearance in this series for Distefano, who appeared on his 1987 Donruss card a year ago today.

The 1990 Fleer set last appeared here in early July of 2022, when we took a look at the Moises Alou rookie. I noted in that article that this set was extremely popular when it came out, and it was massively overproduced due to that popularity. That means that any card from the set is plentiful on Ebay, as you will see in the pricing section below. For now, let’s take a look at card #464 from the 1990 Fleer set, featuring Benny Distefano. 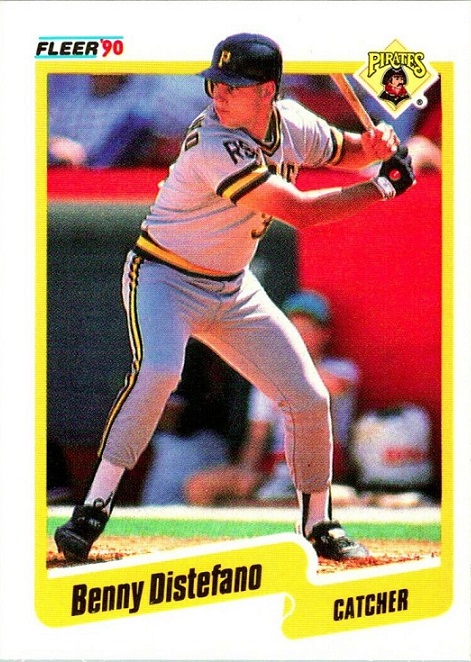 What stands out about this card is in the bottom right corner. Fleer actually listed him as a catcher. Distefano caught six times in his pro career, which lasted 12 seasons. He was not a catcher. He was an outfielder, who was the emergency catcher, doing whatever he could to stay in the majors. While it’s a real stretch to list him as a catcher, that’s what makes this card so unique.

Fleer used team colors here around the photo, including the black for the writing. They also included that great team logo, giving this card a good look. This is a set where I like the Pirates cards a lot more than the overall set.

One thing interesting here is the RSC patch you can see on his right sleeve. That was for Richard Caliguiri, the mayor of Pittsburgh, who passed away in May of 1988. That means that this photo was from the 1988 season, so Fleer didn’t get an updated picture of Distefano. 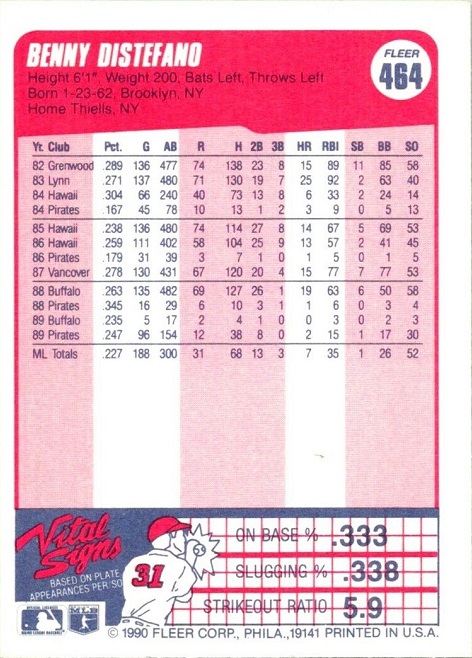 The backs of these cards are quite colorful, and the lines for the stats remind me of the sticks of gum that came in these packs of cards. Fleer started adding in some extra stats on their cards after a few years. This one included OBP, slugging percentage and a stat called strikeout ratio. They don’t do a great job with that stat, adding a note on the side to help explain it, but anyone who sees it now will think it’s much better than what it’s actually saying. It’s his average amount of plate appearances per strikeout. Now they divided the strikeouts by the plate appearances to find the rate. In today’s world, he had a 17.0% strikeouts rate in 1989, which makes him Hall of Fame material in today’s game.

An interesting note about the player at the bottom. He’s wearing #31, which Distefano wore at one time with the Pirates. However, his number was 30 during the 1988-89 seasons. It turns out that everyone got #31 and the same faceless mannequin man.

There are 61 copies of this card on Ebay right now. Don’t pay more than $2 delivered unless it is graded a 10 or it is autographed. You can get autograph copies for $5 delivered. The only interesting auction is Distefano on the top of an unopened pack of 33 cards and three stickers. The price is $8, which you will only get back if you hold on to the pack for another 20+ years.