January 22nd is not a good day to match up cards to the history column. A total of five former players were born on this date, and three of them didn’t have cards with the Pittsburgh Pirates during their career. One of the other two players is Fred Cambria, who has already been featured here twice because he appears on two great rookie cards (here and here). That’s all he has available. Then there’s Jimmy Anderson, a starting pitcher for the 1999-2002 Pirates. He appeared in this series once before on a 1997 Topps card featuring three prospects. He’s not the type of player who is going to appear here regularly, but I made an exception for this card.

I decided to use Anderson again today before searching for a card to use, but the card I landed on turned out to be a jackpot for this series, which started 34 months ago. Not only is this card the first time for the 2001 Fleer Ultra set, it’s also the first time for Tike Redman. He played for the 2000-01 and 2003-05 Pirates, putting in about the same amount of big league time in five years with the Pirates, as Anderson did in his four years. You play five years for a team and you shouldn’t have to wait until around 1,000 articles before you appear in a Card of the Day series. Let’s take a look at card #226 in the set. 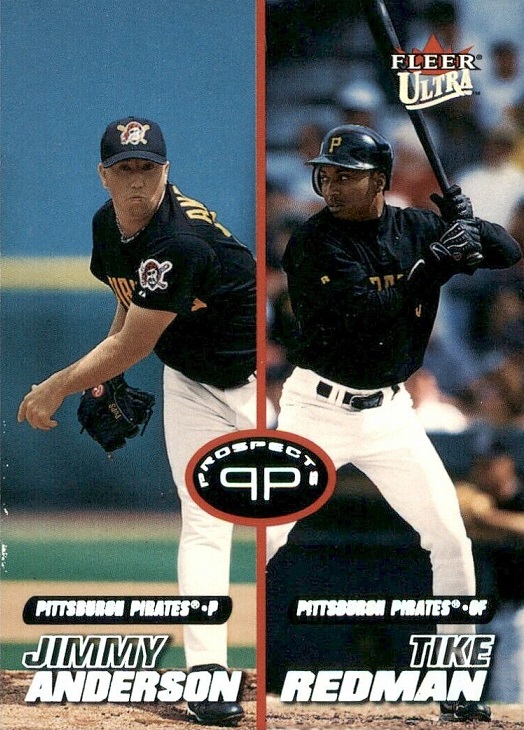 This is a prospects card, which included Anderson, who was no longer a prospect at the time, making him an odd choice for this card. He debuted in August of 1999, and still had his Rookie of the Year eligibility left going into 2000. The problem is that he made 26 starts and threw 144 innings in 2000, so that was his rookie season. I’m really not sure how he ended up on this card. At that point in the Pirates system, they definitely had some other players who would have been good choices for a prospects card. Redman debuted in June of 2000, but he only played nine games that year for the Pirates. At 23 years old, with decent overall stats in Triple-A/MLB in 2000, he certainly qualified as a prospect. This is not his actual rookie card. He had a few cards released in 2000.

I mentioned this recently with the borderless card look. This particular look is nice, but it was really overdone during this time. This design looks like so many others from that era. There’s no way I would have been able to say for sure this was a 2001 Fleer Ultra just by the look, especially not with this particular card either, since Anderson was called a prospect here. 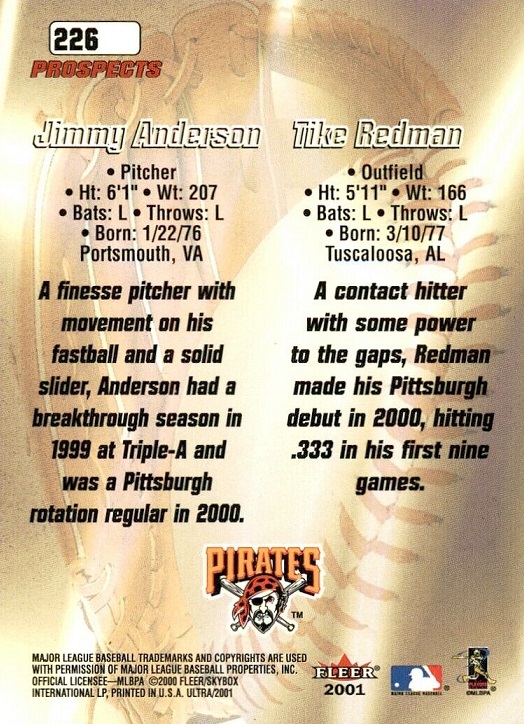 I like the look of the back here. That faded background photo of a baseball in a glove in nice looking and doesn’t distract from any of the writing. You get minimal information about the two players, but it still works. You’ve got to love the Pirates logo from that era as well. Maybe they could have done a little more here, like moving “prospects” to the right corner and using more of the top (or move everything up and put a bigger team logo or more player info?), but it still looks good.

This set is not a popular one, and it’s not expensive either. However, the lack of popularity makes this a hard card to find on Ebay. There are only nine examples for sale right now and one of them really stands out from the other cards. If you just want the basic one you see above, multiple sellers have it under $2 delivered. There’s a gold medallion version, where much of the front is gold in color, and that can be had for $2 as well (though only one is available at that price). Then there’s a platinum medallion edition limited to 50 copies, which one seller has for sale. They are asking $15. The one that stands out for me is a copy autographed by both players. That one is $14. Considering that it has to be tougher to find that than it is the platinum version, I’d say that is a good price.