This is a card I think a lot of people will like. It covers throwback cards for the older folks, a popular semi-recent player for the younger fans, and the autograph crowd will enjoy this one. It’s from the 2002 Topps Heritage set, and it’s the factory released autograph version of the card for Brian Giles. The throwback part of this card is that they used the front and back design from the 1953 Topps set. It’s the same design that is currently being used in the Living Set, which Topps is releasing in the form of two cards each week since it began in 2018.

This is the third appearance for Giles in this series. He’s the franchise’s all-time leader in slugging (.591) and OPS (1.018), with the only slight asterisks being that he doesn’t rank among the top 50 in plate appearances, since he only spent his peak seasons in Pittsburgh. That doesn’t take away his accomplishment, just explains why he isn’t considered among the franchise’s all-time greats. 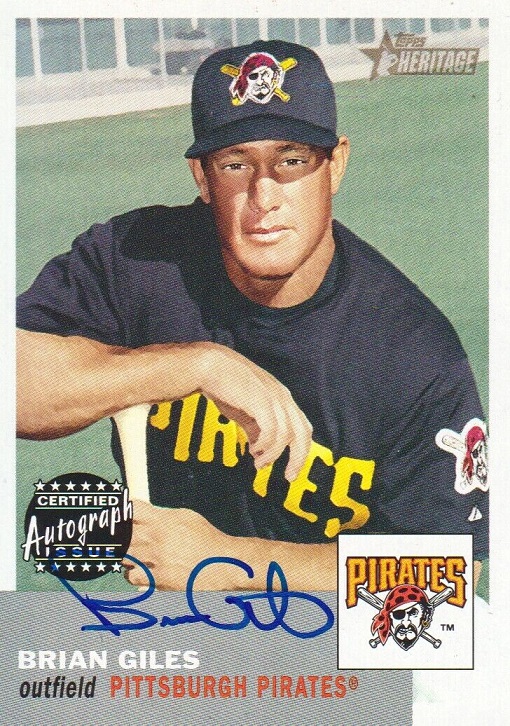 It’s not exactly how the 1953 set looked, but they used the general idea, including the use of artwork. You might say that the bottom box with his name/position/team and part of the autograph is supposed to be black. That is true, except picture what that autograph would look like if the box was black. If you like the look of the card itself, you can get the regular base version of this card and that gray box will be black, just like you remember and love.

I don’t think Topps thought this out 100%. Giles has a short name, a relatively nice autograph, but it ended up partially obscured by the “certified autograph issue” logo in the bottom left corner of the photo. Some of the other guys who signed in the set had to just figure out a work around for the lack of space and it didn’t come out so well. Hall of Famer Red Schoendienst is one who had trouble, while 1950s star Al Rosen picked the top corner and wrote sideways, which looks very odd.

Since this is a throwback design, you get that nice big spot for the team logo, which also appears on his hat and his sleeve. 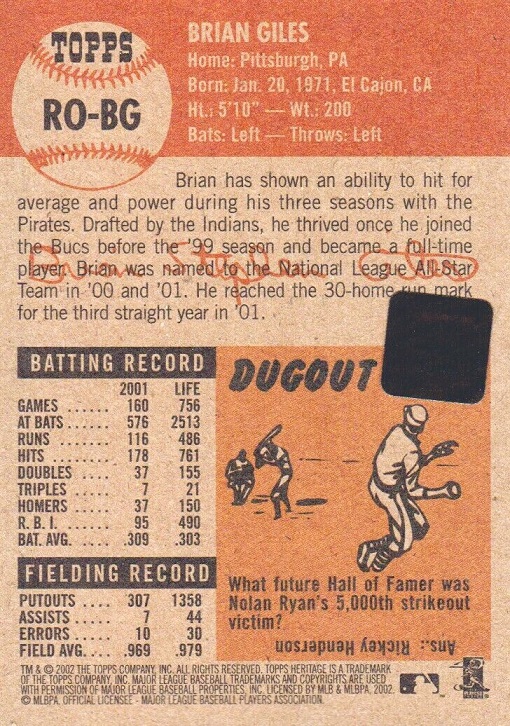 The back has the same design as the 1953 Topps set as well. They used the same set of stats, including fielding numbers, plus they only did one year and lifetime stats. One thing I don’t like about this card is the authentication sticker. On this particular scan, it’s completely covering the word “quiz” in dugout quiz.  On some other cards I saw, it’s covering words in that bio section. I get that they have to put the sticker for authentication purposes, but literally they chose the size of sticker, so they chose to make it big enough to cover words on the back.

The facsimile signature on the backs on these cards, which blends into the background behind the writing, is supposed to be the official signature of the player, which was pulled off of the Topps document they signed. At least that’s how they did it back in the day.

If you’re interested in buying one of these cards, there are actually multiple copies available on Ebay. The listed examples range in price from $7 to $32, and there’s no real difference besides the asking price. Most of them are listed around $20, but there’s no reason not to go cheaper if the seller is reliable. If you want the unsigned card that looks slightly more like the 1953 Topps design, that can be had for $2-$3 delivered.