Today’s Card of the Day comes from the 1985 Donruss set, which hasn’t been featured here in the last 15 months. That last one was for Brian Harper. Today’s player is Lee Lacy, who signed a six-year deal with the Pittsburgh Pirates on this date in 1979. That obviously turned out to be a good decision by the Pirates. He helped them to a World Series victory, and he put up 12.0 WAR for a great price. The contract was basically worth $1M total. When he left the Pirates in 1985, he made $725,000 for that season, which resulted in him putting up 1.7 WAR. 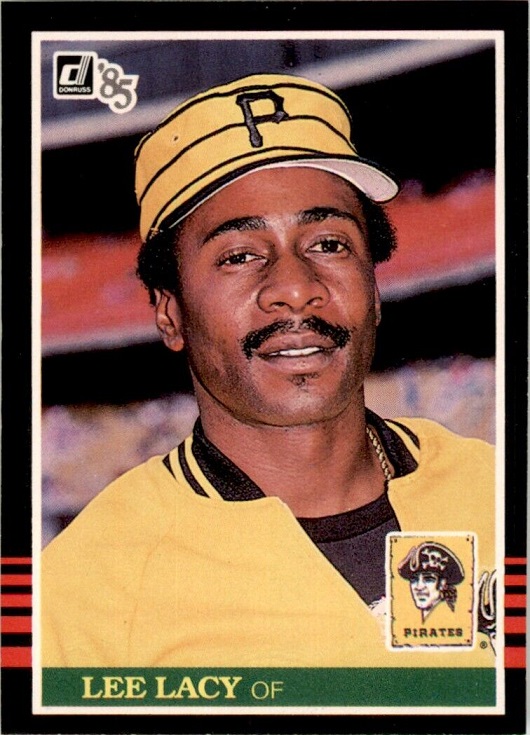 I’m a fan of the 1985 Donruss design, but that is not why I picked this card. You don’t see the reverse colors on the pillbox hat too often. I know some people don’t like it, but it works for me. Not only that, he’s got the gold jacket with the great logo from that era. Donruss was kind enough to throw the logo on the card. There’s a lot of good Pirates stuff going on here. I don’t particularly like the green/yellow combo for his name, but the black borders/red racing stripes look good on this card. 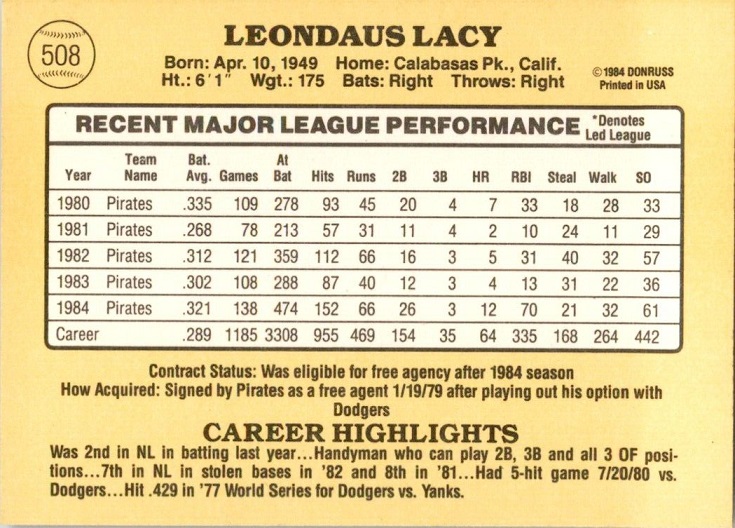 The back is typical of Donruss from this era. They had very little variation from 1982 through 1991, just going back and forth between blue and yellow/orange colors. Donruss always included five years of stats, as long as the player have five seasons in at the big league level. If they didn’t, you got fewer lines of stats, instead of them throwing in some extra minor league stats.

I mentioned up top that Lacy signed a six-year deal with the Pirates. What you see here in the stats is his last five seasons with the team. All you’re missing is that important 1979 season.  It’s interesting that the highlights section notes that he can play second base and third base, because those were barely options for him by the time he reached the Pirates. In his last nine big league seasons combined, he made three starts at second base and one at third base. By the time this card came out, saying he could play those positions was akin to saying “If we give him an infielders glove and ask him to stand at second base or third base, he will stand at those spots”. In that same sense, you could also say that he can play shortstop or first base if needed.

I think I mentioned this last time we looked at one of his cards, but how many people knew his actual first name before seeing it there?

One thing they did that was a bit confusing to people was put the printing date on cards. Since they released cards before Christmas for obvious reasons, the cards were printed earlier than the actual year of the card. Inexperienced collectors will see that 1984 on the back and think this is from the 1984 Donruss set.

If you’re interested in this card, there are plenty of examples available, including six autograph versions that range in price from $6 to $22 delivered. There are plenty of options under $2 delivered for the regular card. There’s also a Donruss Leaf version that you’ll see a few examples of, so watch out for that, unless you want the Canadian cousin of Donruss.