Today’s Card of the Day comes from the 2003 Donruss set. You might be surprised to find out that this is the first time we are featuring this set. It only took 34 months to get to it. I actually had no idea it was missing from our extensive catalog. I just scrolled through scans of today’s player, and this is where I stopped.

Today’s subject is Mike Gonzalez, relief pitcher/closer for the 2003-06 Pittsburgh Pirates. You could say this is based on the This Date in Pittsburgh Pirates History article, just not this date in Pittsburgh Pirates history. I wrote the history article first today, then set up the basics for tomorrow’s article afterwards. I noticed that January 19th had more than one player I wanted to use, so Gonzalez got pushed up one day. The Pirates traded him to the Atlanta Braves on tomorrow’s date in 2007. No offense to Gonzalez meant by this, but I saved a better player for tomorrow. No looking ahead, you can wait to find out! 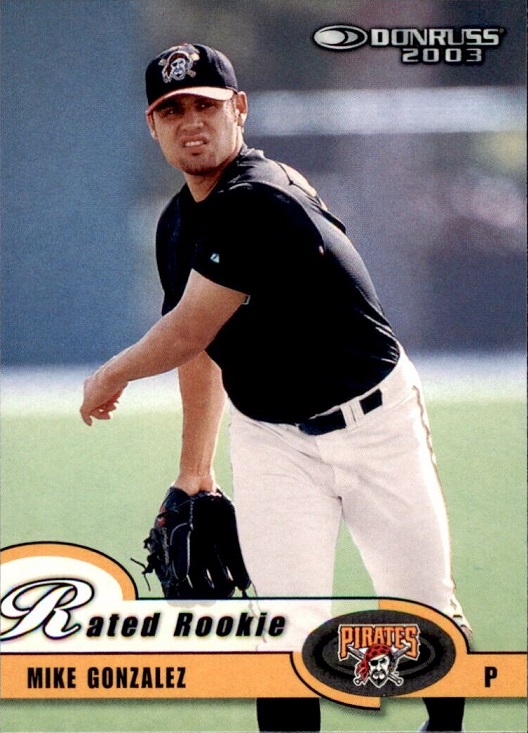 Donruss went with a borderless look for these cards, which was all the rage by 2003. Funny side note. I looked through scans of this card on Ebay before writing this up and someone photographed one on a blue background. Their cropping was so good that I thought there was a blue border variation. That was until I saw someone post one on a gray background without cropping the background close to the card.

If you like the same things I like, then you probably like the look of this card. They went with Pirates colors and added that 2003-era logo. I like the borderless look 99% of the time, though it makes the sets from that time period harder to differentiate. Someone found something that works (it was Topps Stadium Club) and everyone ran with it.

I’ve mentioned it in the past, but if you add something like “Rated Rookie” to a card, I always like it more. As a kid, I always thought those cards were worth more regardless of who was on it. Then I started reading price guides and figured out that I was wrong, but I was already hooked by then. 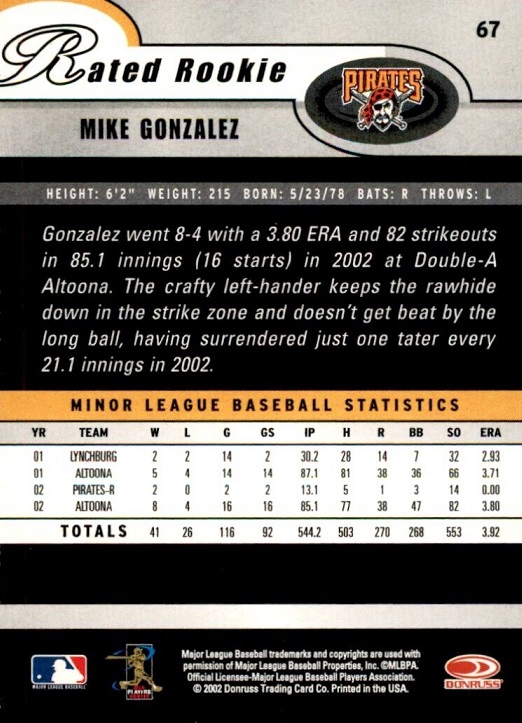 You know that I liked the back of this card. They went strong with the team colors, even more so than the front. I like the gray at the top as well. They included the team logo again, which is always good for bonus points. They have minor league stats! Wait, didn’t Gonzalez debut in pro ball in 1997? At least they have partial minor league stats, which is much better than anything Donruss did in their early years. This card is for those of you who didn’t know that Gonzalez was a starter before he made the majors. The most important thing they did here was black writing on a white background for the stats. I can read them without ruining my peepers.

If you’re interested in this card, you have two choices, pay $2 delivered for a normal regular old copy OR pay a little more (around $10) for an autographed copy. Don’t search for the elusive blue border copy, it only existed in my mind for about a minute. Happy collecting!