Today’s Card of the Day comes from one of the most massively overproduced sets out there. About 10-12 years after the 1988 Donruss set was released, a young John Dreker was in a baseball card store trying to maximize what little money he had to spend. In the back corner of that store, the owner had a clearance on older items, including boxes of 1988 Donruss cards. I knew at the time that they weren’t worth much, but this was 36 packs of 15 cards each, and he was asking $2 per box. He wanted to clear out old inventory, and these cards were sitting in the back room of his shop for at least ten years. That was in my price range at the time, so I walked out of there with three boxes of 1988 Donruss.

I never opened any of those packs, mostly because I already had the set, as well as maybe 1,000 random cards from the set from a large collection of junk wax cards I received as a gift around that same time I bought the boxes. I’m still holding out hope that enough people will throw away 1988 Donruss cards that those boxes might be worth something someday. Maybe my good friend Tim Carroll will cut up enough of them one day to help move the needle. He just did a number on the population of 1987 Topps checklists, moving the price of those from five cents each to six cents.

Anyway, the 1988 Donruss set is still a good one, despite it lacking value. It’s something you can buy in bulk and enjoy reliving old memories, or if you’re younger, learning about older players. One of those players in the set is Pittsburgh Pirates catcher Tom Prince, who you either remember as a player first, or only as a coach for the team. His rookie card is in the 1988 Donruss set. He’s card #538, which we will now check out. 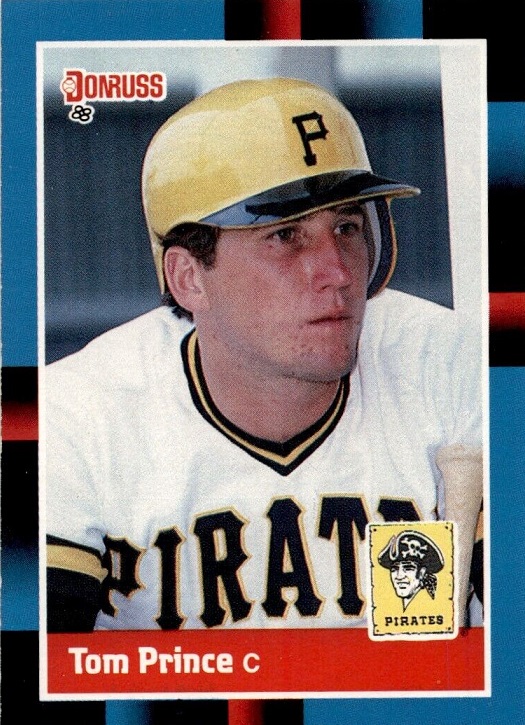 This is a set that has grown on me over the years. I don’t remember particularly liking the design, but I think it works. Possibly it’s just how long it’s been since we’ve seen those great uniforms of the era on a daily basis, and seeing the players that wore them on cards that are now 35 years old. That logo from that era is always appreciated, so that helps too. I really like those gold batting helmets, and wouldn’t mind seeing more of those, at least on throwback nights once in a while. Prince is probably 22 years old in this photo, unless they got a picture of him late in the 1987 season, when he appeared in four games over the final two weeks. 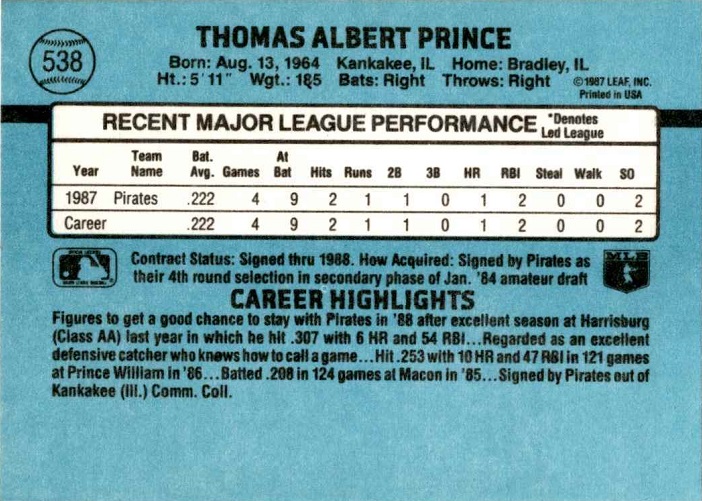 I won’t deep dive into the back. I’ll point out the standard things for those new here. Donruss had no originality, doing the same thing with their backs for a ten-year run, starting with their second set in 1982. They all have the same setup, and they got really lazy for a time, just going with blue and yellow/orange colors every year. This barely looks any different from a 1986 back. I hate that he had one year of stats and they just went with that and nothing else. Donruss did not like using minor league stats. What I like here is the contract status section, which has been helpful in the past with history articles. It’s amazing how I can search Newspapers.com, which is an absolutely amazing site, and not find some things that are on the back of Donruss cards.

This card is worth about ten cents. You can’t buy it on Ebay for ten cents because sellers would lose money on the shipping/listing fees. However, multiple sellers have it listed for $1 delivered, which is well worth the cost if you want one of his rookie cards. Maybe some day it will be worth $1 too, you never know. There are plenty of autographed copies available for a little more, and Prince has an outstanding autograph, so that might interest you as well.