I’m stretching the rules for this series so I can include one of my favorite old sets. The 1909 T204 set is one of most unique looking vintage baseball card sets. It includes 121 cards, putting in some obscure big league players. The power card in the set is the all-time greatest pitcher in baseball history, Walter Johnson. It’s missing a lot of big name players though. There’s no Ty Cobb, no Christy Mathewson, no Tris Speaker, no Cy Young. There’s also one other area where the set is completely lacking. There are zero Pittsburgh Pirates in the set.

If I wanted to include this set in our Card of the Day series, I had to stretch the rules. I usually want cards the show players in a Pirates uniform on a card that says Pirates/Pittsburgh. I’ve included some that only say that they were with the Pirates, but show them in another uniform. I’ve done the opposite as well a few times. This card here today is neither a Pirates card, nor is it a Pirates uniform.

When picking which card to use here from the T204, I decided to go with a player who doesn’t have a Pirates card available. There are almost 20 players in the T204 set who played for the Pirates at some point, and only a handful of them have cards with the Pirates, so there was no shortage of options. The ultimate deciding factor was scan quality, as well as a card available on Ebay for the pricing section. The first player I found who checked all of those boxes was Frank Bowerman, catcher/first baseman for the 1898-99 Pirates. Here’s a look at his T204 card. 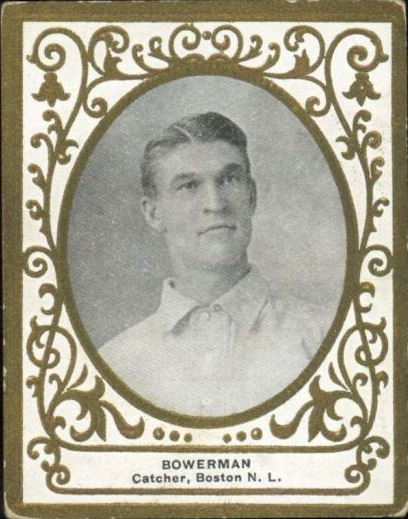 I’m willing to bet these cards weren’t universally liked when they were released. It feels like a hate it or love it type of look. There are some people now who feel the same way. Either it’s their favorite set, or they don’t like it at all. There’s not much middle ground. All of the players have oval frames for black & white photos, with the ornate design that you see. All of the photos look similar to what you see here. There are no action photos, or players wearing hats. There are a handful of players in the set (six I believe) who also have square frame photos with a much different design, though the border/frame are still the same color. These cards are closer to being square than most tobacco cards, measuring 2″ by 2½”. They are a heavier stock than some tobacco cards as well. 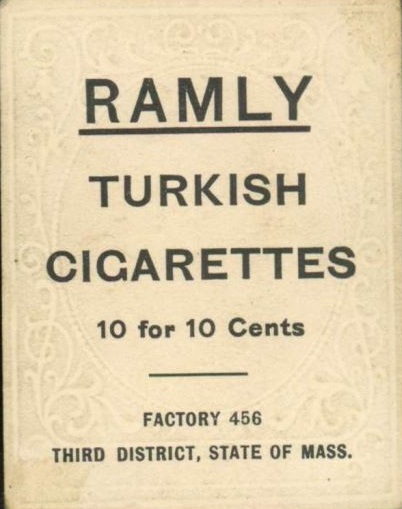 Most of the T204 backs look just like this one. It’s an ad for Ramly cigarettes, which you could once get for a penny each! I don’t smoke and never have, but I believe they cost more than that now. There are two other possible backs, one being blank with no ad, and one having a brand called T.T.T. , which was a natural Turkish cigarette with a cork tip. Still only cost a penny though!

The price of this card shown above is $650 for one graded an SGC 3/40. That price is a bit high, but these cards are all over $100, even in lowest grade, which is one reason why the set isn’t widely collected. It’s costly to put together a complete set because they are tough to find. It’s a set where you need both patience and money to collect it. For the big cards in the set, you need lots of money. If you go for a master set with the different backs and the square frame photos, you’ll be putting out more. The interesting part is that prices of commons for this set really haven’t changed in a long time. I have six cards from this set that I last bought one at least 15 years ago. I bought them with my first job, possibly still when I was in school. I think they are worth about the same now as what I paid. It’s also a set that if a few people got interested in it at the same time, it would drive up the price due to how hard the cards are to find. The amount of obscure players hurts the set because some people won’t pay three-figures for a player who barely played in the majors.