The fourth player born on this date, and the one who has cards available, is Jeff Banister. Most people know who he is, and it’s not because he’s tied for the highest lifetime batting average in big league history. He was with the Pirates for a very long time, serving in various roles during his time. He didn’t have a lot of big league cards available, and almost all of them came while he was the manager of the Texas Rangers. We looked at his 1991 Topps MLB Debut card a year ago today. For today’s Card of the Day, we went to his minor league days and found a great pose on a unique looking set. Here’s his 1991 ProCards card, picturing him on the Buffalo Bisons of the Triple-A American Association. 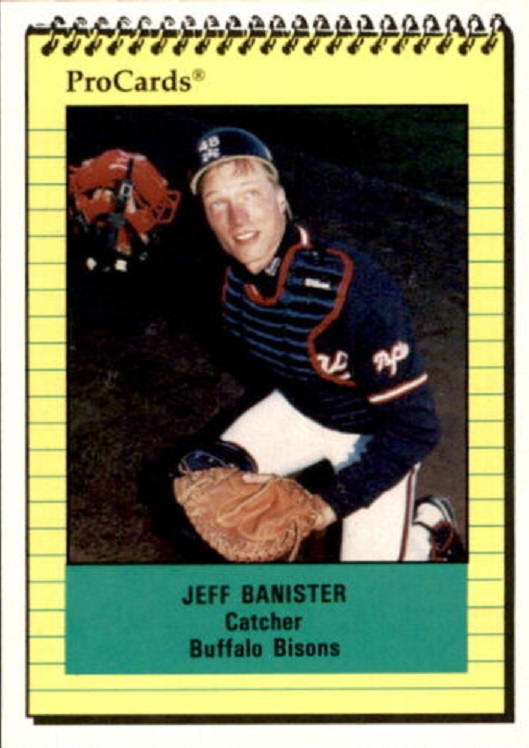 This pose is what really caught my eye first. Minor league sets almost never had any actual game action photos, but you got a lot of staged action. If you look at a set from around this era, there are a lot of guys holding a bat or pitchers looking like their getting their sign from the catcher. There isn’t much variation, so then something like this shows up and it’s clearly not your typical minor league card.

It was only after I decided to use this card that I really focused in on the design to see what else I could talk about. I won’t say that I like this particular design, but I do appreciate the effort to try something different, and it’s not really that bad. It’s more like “Oh, the background is a notepad, I get it, that’s different”. 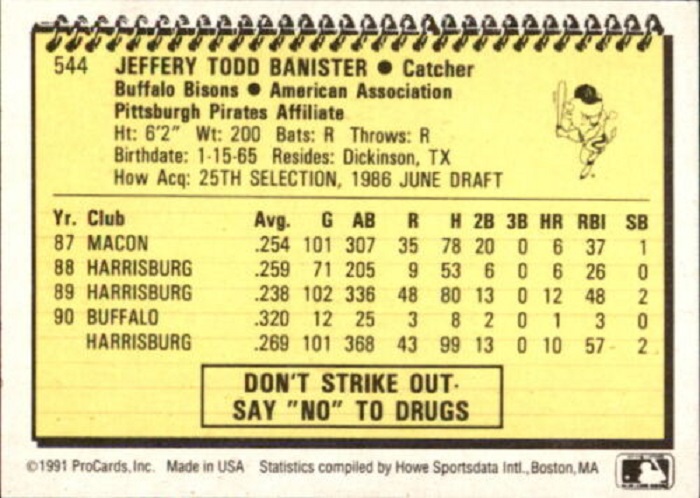 The back of the card is a notebook too, except this one has red lines. They have the Bisons logo on the card which is a nice touch. They are missing one year of stats for him, which would have been nice to add. His 1988 season is so crazy. The guy bats .259 and hits six homers in 71 games. Somehow he scores nine runs all season? How did he score just three more runs besides his homers. He drew some walks, had a HBP, probably reached on some errors/fielder’s choices. How did he finish with nine runs! If you’re wondering, Banister hit a triple in 1991 with Buffalo, so he didn’t finish with zero.

I hope striking out isn’t the same as doing drugs, otherwise MLB is in a lot of trouble with the current group of cavemen swinging hard and hoping for the best every time they go to the plate.

If you would like this card, you have two options. You can buy a solo card, which is being sold by one person for $17.99 and another person for $1.60. One of those is a much better deal. The other option is the team set, which can be had for $7-$10 from multiple sellers. It’s not a great set, but there are some names you’ll recognize, like Blas Minor, Carlos Garcia, Rick Reed, etc.