Today’s Card of the Day comes from the 1994 Score set, and it features Pittsburgh Pirates pitcher Steve Cooke. His only other appearance in our Card of the Day series comes from his 1992 Bowman card, which in my opinion is one of the most ridiculous sets ever created. I went back to look at this article from two years ago today, and I said to myself that he looks like he’s on a job interview for a minor league announcing gig. Then I skimmed through the article and saw that was my initial impression when I saw it two years ago

I was on this Earth and collecting cards in 1992, and while I don’t remember much from then, I remember getting one pack of Bowman and thinking what the heck is this set? I bought one pack only, and at the time that was one more pack than I should have bought. I was older and wiser in 1994, and I remember liking the Score set from that year because of the black border design. I don’t particularly have a favorite Steve Cooke card, but his 1992 Bowman and 1994 Score card are probably as far as you can get from each other in desirability. The absolute only appeal to the Bowman card is that it is his rookie.

Here’s a look at the much nicer 1994 Score card of Steve Cooke, which is #186 in the set. If you don’t remember him, I’ll note that he was not a good hitter. Something important to remember before seeing this card. 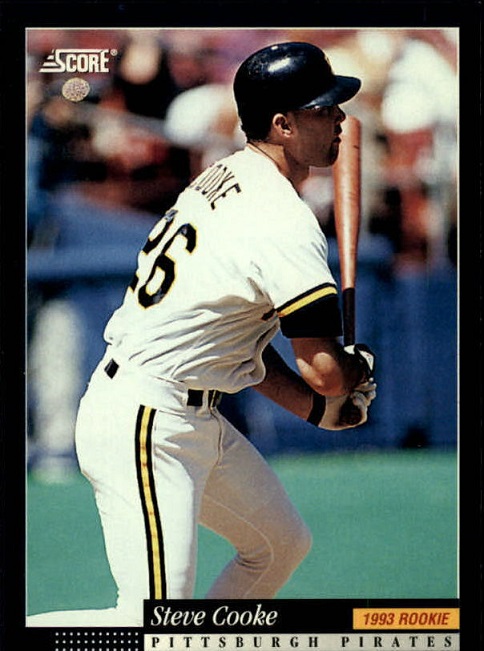 I already gave away a few spoilers on this card by mentioning the black border and the fact that he was not a good hitter. I always like when sets throw in a little curveball for pitchers by picturing them as a hitter. Notice in the bottom right that this says he was a 1993 rookie. That was his first full year in the majors. He joined the Pirates late in 1992, helping them to their third straight National League East title. This card isn’t his Score rookie. He appeared in three of their sets in 1993, so that little note at the bottom is just telling you that he still had Rookie of the Year eligibility going into 1993.

This set had gold border variations for cards that were tougher to find than the regular base card. In this instance, I am not a fan of the gold borders because it takes away the best part of this set’s design.

One thing I can’t help but notice on this card is right below the word Score in the upper left, it looks like there is a firework going off. That’s actually something in the photo, and it doesn’t show up on the gold version because that variation has a special logo that covers up that spot. I actually wondered if that was something Score put there, and was curious enough that I checked other cards in the set. I also wondered if it was just on the scan I pulled. Nope, it’s just some kind of sun reflection in the photo. 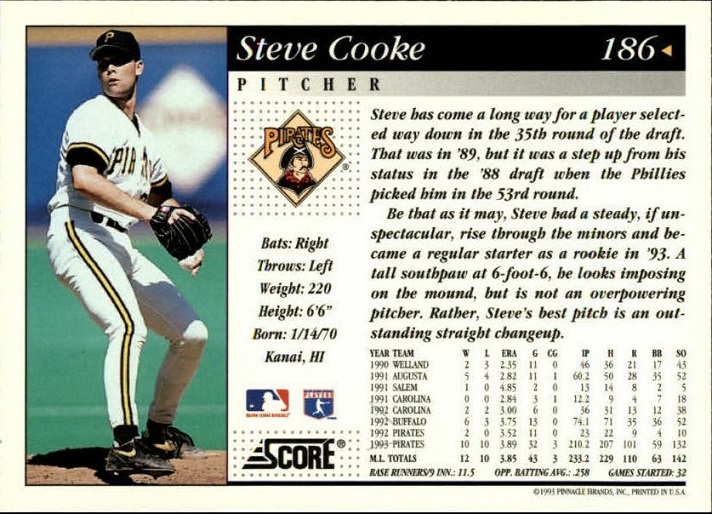 As you can see on the back, Cooke really is a pitcher. He also had a solid start to his big league career at a young age, as shown in the stats. I mentioned it in his bio included in today’s history article, but it’s fine that Score repeated my idea 29 years before I had it. Cooke really made a huge jump by going from a 53rd round and 35th round pick, to the majors by age 22. I think a 6’6″ lefty now who had his stuff at a young age would definitely be a top ten round pick. The stats show he was obviously doing well from the start in the minors, though I’ll point out that you basically just have to throw strikes as a lefty in the lower levels and you’ll be able to put up strong stats. Many players don’t see any quality lefties growing up. When I played little league, there were years where the only lefty pitcher in the league was me.

One final quick note. Cooke was born in Hawaii. He ranks eighth all-time in wins for Hawaiian-born pitchers (26).

If you’re interested in this card, you’ll be happy to know it’s a common. There aren’t many options for it on Ebay because not many people are selling 1994 Score commons. You can get the regular version, or the gold border version, for about $2 delivered. Happy collecting!