If a fan of one-time Pittsburgh Pirates pitcher Murry Dickson stumbled upon this website on August 21, 2020, they probably went into a Murry overload. That day we posted his bio in our This Date in Pittsburgh Pirates History article, then tripled up on his content by posting a Card of the Day article and a Pittsburgh Pirates Seasons article (I’m going to return to doing these Seasons articles once all of the player bios have been updated), both about Dickson. That was two years and five months ago now, and today’s Card of the Day is the first time he’s been featured in any way since.

Dickson was a good pitcher on bad teams. That Seasons article above shows how he pulled off a baseball miracle by winning 20 games for a 90-loss team, back before the 162-game schedule. He had a 172-181 career record in 18 seasons, but that win-loss record does not paint a great picture. The Pirates were able to trade a 37-year-old, who just led the league in losses, for two players and $70,000 cash, which was a great deal of money at the time. They did that and still lost the deal, as Dickson clearly made the trade a win for his new team. Unfortunately for him, his new team (Philadelphia Phillies) was barely any better than the Pirates, so he led the league in losses again.

Today’s Card of the Day choice was printed after that miracle 20-win season. He was featured on a card put out by Red Man Tobacco. They had a set of 54 cards, highlighting 26 of the best players in each league, along with one managerial card for each league. Dickson was joined in the set by his teammate Ralph Kiner. Here’s a look at card #5 from the set, featuring Murry Dickson. 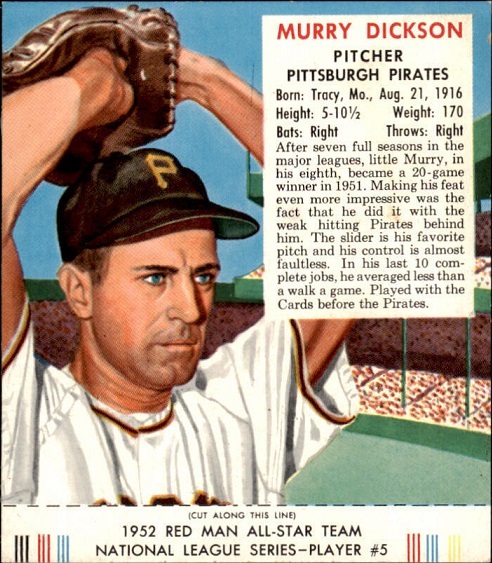 Red Man put out another set in 1953, and Dickson was included in that one as well. They used the same artwork for him, but that card has a plain yellow/orange background. They basically did the opposite of 1955/56 Topps cards, going from the artwork and plain background, to the same setup and a baseball scene the second year.

These cards have some solid artwork throughout the set. The drawings of the players look like the actual players, which isn’t always the case, as those who have followed this series should know by now. This card hits on the improbability of his 20-win season, though they went with calling the Pirates “weak hitting” instead of mentioning the 90 losses. In actuality, the Pirates were an average hitting team that year and the pitching staff outside of Dickson was the problem. Kiner alone made sure they weren’t weak-hitting, but he was joined by Gus Bell and a group of players like Wally Westlake, Clyde McCullough, Joe Garagiola, Bill Howerton and Peter Reiser who all put up solid numbers at the plate that year.

That “fact” on the front about him averaging less than a walk per game during his complete games is an interesting one. If he was having a bad game with walks, he probably didn’t complete the game, so it’s a bit of cherry picking. The other thing that makes it interesting is that it’s not true. I don’t know what time-frame they are using for his last ten games (I assumed the last ten of the 1951 season at first), but he has no ten-game period of complete games with fewer than ten walks during any part of the 1951-52 seasons. 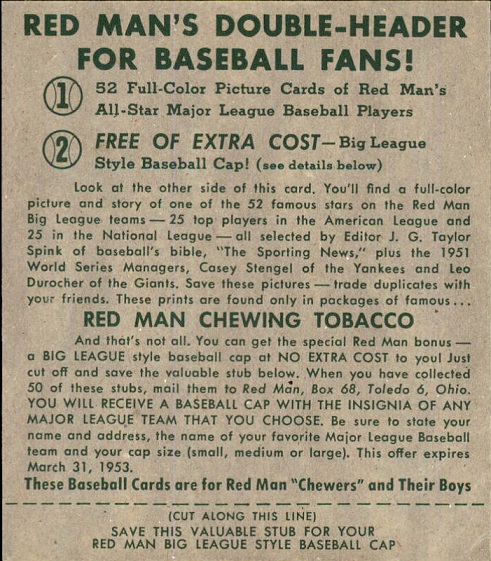 The back has no information about Dickson. It tells you about the set, about an offer for a team hat, and it’s an ad for Red Man Tobacco. Two things to hit on here. The quick first one is that they say these cards are for Red Man “chewers” and their boys. Spending my whole life collecting/talking about cards, it’s not a stretch to assume that boys will be getting the cards, but not 100% of collectors are males, so I assume some little girls collected cards back then, even if the number was very small. They don’t make the insinuation that the chewers are all male though, so I guess it was okay for adult females to collect, as long as they used the tobacco.

The other thing is the offer. That tab you see on the bottom of the front makes this particular card more valuable than one without the tab. They were meant to be taken off, so grading companies will still grade them without the tabs, just like some other similar sets. Collectors prefer the complete card and pay more for it. So imagine “damaging” 50 cards to receive a hat. If you held on to these cards all of that time, you cost yourself a small fortune for a hat you no longer own I’m sure.

As for the pricing, the one in the scan you see is $85, and a similar looking one with the tab is $75. The most expensive one without a tab is listed for $25. There’s a hidden gem on Ebay right now for a lower grade (but still presentable) one with a tab for $21. A really nice looking one with a tab ended for $47 in a straight auction, so $50 for a nice one seems like a good area to be in if you’re interested.