Today’s Card of the Day comes from the 1984 Topps set and it features Pittsburgh Pirates third baseman Bill Madlock, who is celebrating his 72nd birthday today. Topps put out cards in their 2012 Archives set that used the 1984 Topps design. One of those cards was Madlock. Those sets take old Topps photos that they never used before and then combine them with old Topps card designs, even if the photo and year don’t match up. They are great looking cards, especially with the glossy finish and brighter colors added to old favorites. I’ve even seen the 1977 Topps design look good on one of those cards.

I was going to use the 2012 Archives card here today after scrolling through options for Madlock. I only changed my mind after seeing that every other time I’ve featured him here in this series, it hasn’t been on one of his base cards from the Topps, Fleer and Donruss sets during his time with the Pirates. I always went with an off-brand card, or one that showed him with other people. You can see the cards of him that I’ve used already here in this search.

So that’s how we got to the 1984 Topps set for Madlock, but I recommend checking out that 2012 Topps Archives set for his card. Most of them available on Ebay are autographed, and unlike 97.2% of the current players, he actually used real letters in his name when he signs. Here’s a look at card #250 from the 1984 Topps set, featuring Bill Madlock. 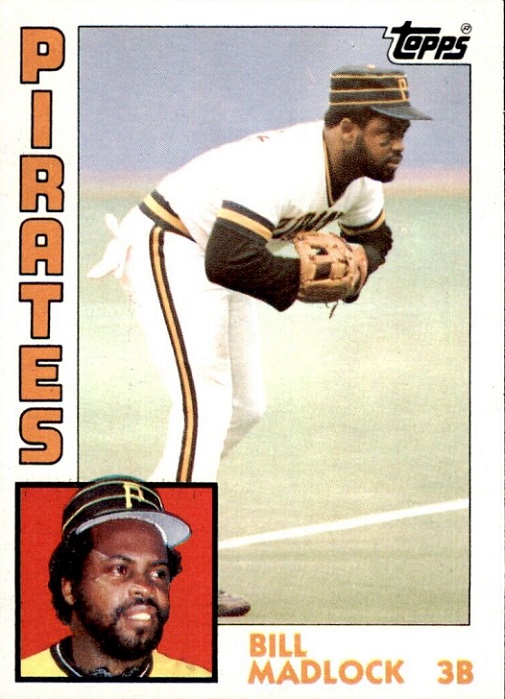 The 1984 Topps set is so close to be one of my favorites from the 1980’s, though it would still be well behind the 1981 and 1987 sets, as those are two of my all-time favorites. I like the setup and idea they had here, but I would prefer that the writing matches the team colors, and that red background behind Madlock’s second photo needs to go. It’s a strange set, because some teams do match up perfectly with the colors and look better than the Pirates players. Then you get a card like the most popular one in the set, Don Mattingly’s rookie, which has purple writing for the Yankees and an orange background for the photo. It definitely doesn’t work, but it’s his rookie, so no one really cares about the design.

I like this Madlock card in particular because of the action shot, but it looks better than many of the Pirates cards in the set. 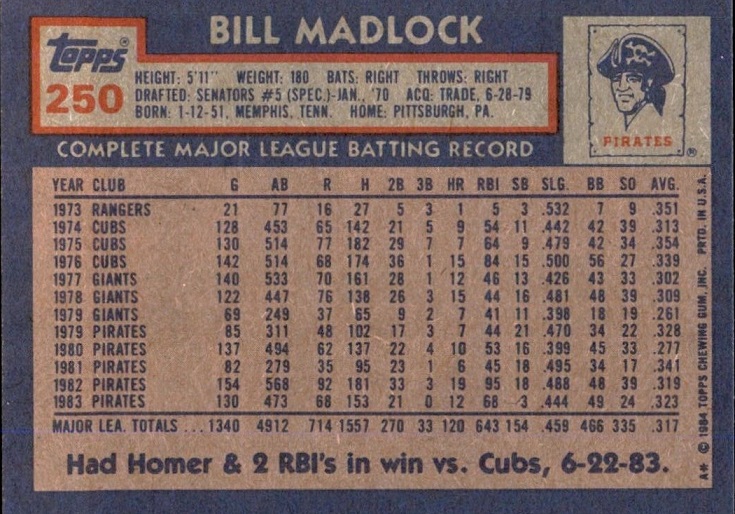 Did you notice that the front didn’t have a team logo? While it would be great to see that logo in full color, I do like the way it looks here on the back. Madlock had enough big league stats in at this time, that they didn’t have room for minor league stats. They also had only one line available for some added info at the bottom and they went with a fact that was rather bland. He had five other games that season that matched up to those exact facts (homer, two RBIs, Pirates win). Nothing really stands out about that performance.

I mentioned up top that Madlock has a really nice signature, and this is a card that can be found from multiple sellers with autographs. The 2012 Archives are mostly factory released signed cards, while that wasn’t a thing with the 1984 Topps set. There are some authenticated sellers, but he also has a signature that you should be able to compare to others to make sure it’s authentic. There are enough examples out there for that comparison. I’m not saying you should buy one that hasn’t been authenticated to save money, I’m saying you could if you do a little comparing. Look for things on authenticated cards that stand out.

As for this card, it’s a common, despite his four batting titles, which means you can find one for sale for $2 delivered from multiple sellers. The autographs start around $13 each, and they go up to $40 for an authenticated copy. I’ll note that if you look for this card, you have to be more specific on Ebay than “1984 Topps Madlock”. He has three cards in the set (two with other people), as well as numerous Topps cards they made with other companies. There are more than ten different cards that will show up under that particular search. You might want to add in the card number to make it easier, or just check out the other cards he has from that year.