I went an entire year without one mention of an important vintage baseball card set in this series. The last time we looked at the T207 set was in August of 2021, when we featured Hall of Famer Bill McKechnie. We cover another Hall of Famer today, as we look at one of the greatest outfielders in Pittsburgh Pirates history.

Max Carey’s T207 card is his rookie card, making it one of the most valuable cards in the set. It’s a set that has a lot of cards that were short-printed, making them valuable due to how hard they are to find. A set collector has some real trouble putting this set together, and that’s not taking into account the total cost of the 200 cards in the set.

The T207 set didn’t have a lot of star players you would expect. There’s no Honus Wagner, no Ty Cobb, no Christy Mathewson, and plenty of other Hall of Famers missing, but it got some obscure players of note. It included Buck Weaver, made famous by the 1919 Black Sox scandal. It has Smoky Joe Wood, one of the elite pitchers of any era, who was sidelined by an arm injury, then came back as an outfielder. It also includes Rafael Almeida and Armando Marsans, two Latin players who were in the majors at the time.

A popular misconception is that Major League Baseball was all white players before Jackie Robinson, but that’s not true (not to mention there were numerous Native Americans in the majors). It’s also really not true anymore with the Negro Leagues being reclassified as the majors from 1920-1948. There weren’t many Latin players back then though, partially due to the fact that the sport caught on later than it did in the U.S., so they had some catching up to do. So those cards of Almeida and Marsans have significant importance in the collecting world.

The Carey card is significant for our Card of the Day series because it is his rookie card. I’m not sure why I’ve held off on it until now, but he has been featured multiple times in this series already. We wait no longer to check out his T207 card. 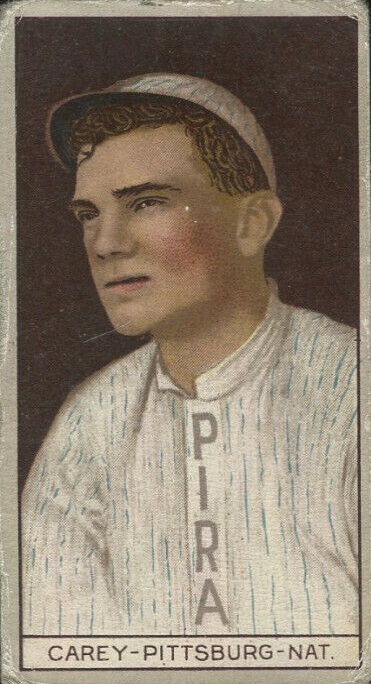 What’s interesting about this card is that they used a 1912 photo on a 1912 card. That’s lucky for us because those 1912 jerseys were a one-year jersey. It was the first time that “Pirates” was on one of their jerseys. They wouldn’t use it again until 1933. Carey was just 22 years old in the photo that this artwork was based off of, with another 17 full seasons left in his career. He was just really coming into his own at this time.

This set is one that a lot of people are split on. The gray border and brown background can make the set look really dull when it is laid out in a big group. Most other sets from this time used colorful artwork and/or ornate front designs. Sometimes you’ll see this set referred to as the brown background set, which doesn’t give off a great first impression.

I’ve mentioned it numerous times in the past, but for those new to the older cards, the set name came about much later than the set itself. The “T” is for tobacco cards, and the “207” is just a somewhat random number used to catalog the cards. The group of cards designated as T200-T217 are all somewhat similar from the same era, except the T203 set, which was a cartoon set of baseball related items that doesn’t really fit well in the group. The T207 cards measure 1-1/2” by 2-5/8”,  which is much smaller than the standard size for cards today. 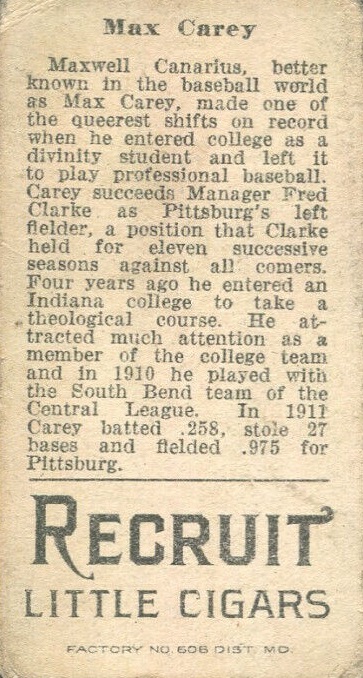 The back has a bio section and an ad for Recruit Little Cigars, one of a handful of brands you can find on the back of T207 cards, which also come with no brand (called Anonymous backs). As you can see by the first sentence, Max Carey shortened his name for baseball. However, that’s not his actual name. He was not Maxwell. He was called Maximilian.

There’s an interesting choice of wording for his decision to play pro ball, though perfectly acceptable by 1912 terms. If you read a little bit more, you’ll see that he took over in left field for Fred Clarke, meaning that the Pirates went from one Hall of Famer to another. That didn’t last throughout Carey’s tenure with the team, as he moved to center field in 1916. He did pass off center field to two Hall of Famers, with Kiki Cuyler taking over for a short time, then Lloyd Waner for a long time.

There is only one of these cards available on Ebay right now and it’s the one you see above. It has a $550 price tag for an SGC 40. A sold copy has an interesting story. Someone bought a PSA 5 in November for $620, then sold it in December for $900. That’s a nice little profit. A few months earlier, an SGC 40 sold for $480. It was not the same one that is currently on Ebay.