Today’s Card of the Day featured player is Cliff Chambers, one of two former Pittsburgh Pirates born on January 10th. This is his second appearance in this series. We looked at his 1951 Topps Red Back in that first article, which was posted in 2021 on the anniversary of his no-hitter with the Pirates. Today’s article takes a look at his 1951 Bowman card. It’s a set that has a boring front design, but the artwork on this particular card makes it one of my favorites from the set. Let’s get right into the card, which is #131 in the set. 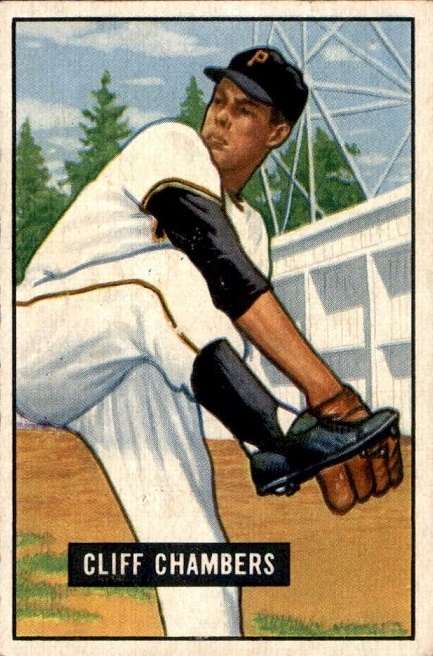 The artwork for the 1951 Bowman set isn’t the greatest, but it’s not the worst either. Cliff Chambers had a distinct look and they captured it here. Even without his name on the front, it would be easy to tell this is him, and I’m not even talking about the other helpful clues (aka a lefty pitcher on the Pirates). Besides the cool pose, I like that they put the effort into the background design here.

The front design is almost as basic as you can get, with the white border/black frame around the photo, along with his name in white inside a small black box. Bowman didn’t put much effort into the designs for their sets. That became so much more true when their 1953 set didn’t even have the name on front. Just white border/black frame, nothing else. That set was a bit different as they used real photos that year. 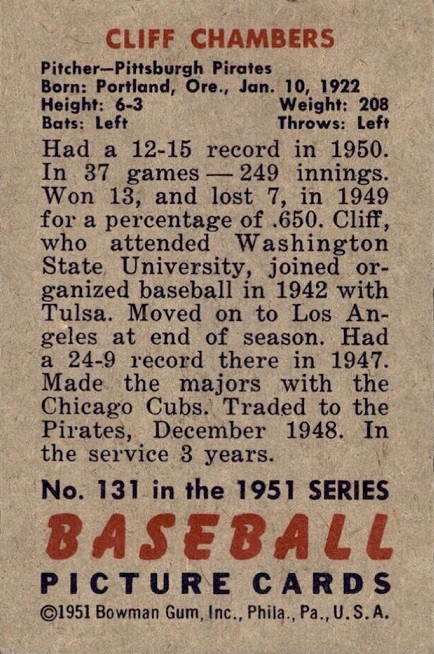 The back of these cards have a lot more info than the front. They give you a nice little summary of his pro career up to that point, including how he joined the Pirates. Like many players included in the 1951 Bowman set, Chambers missed time due to WWII. He missed three full seasons, then did terrific work at the highest level of the minors when he returned. They don’t mention it here, but he went 18-15, 3.02 in 268 innings with Los Angeles in 1946, after not playing during the 1943-45 seasons.

Chambers threw his no-hitter on May 6, 1951, then Pirates fans barely got to celebrate him for that accomplishment before he was shipped off to the St Louis Cardinals in a trade. He actually had a rough time between the no-hitter and the trade, posting a 9.38 ERA in 24 innings. He was out of the majors by the end of the 1953 season, so the Pirates moved on from him at the right time. He’s still forever in their history books, as his no-hitter was the first in team history in 44 years.

If you’re interested in this card, you’ll be happy to know that it’s affordable and plentiful, so you have options with grades/prices. The most expensive one is $60 for an encapsulated/authenticated autographed copy. Chambers lived until age 90, over 60 years after this set was released, so he had plenty of time to autograph items. Being someone who threw a no-hitter, there were (and still are) collectors after his autograph. A PSA 7 of this card is $54, while an SCG 84 (equal to a 7) can be had for $44. There are a few other lower grade graded cards, as well as some autographs that aren’t authenticated, so you have other lower priced options. If you just want a raw/ungraded mid-grade card, you should spend around $10 for one delivered, but you can get lower grades cheaper.