Today’s Card of the Day comes from the 2013 Panini Cooperstown set and it features Hall of Fame pitcher Burleigh Grimes, who was traded away by the Pittsburgh Pirates on this date in 1918. They got a Hall of Famer in return, but it turned out to be a bad deal. The Pirates eventually got Grimes back in a deal that worked much better, as he pitched great in his two-year stay with the team during the 1928-29 seasons. They also had him for a third time in 1934 to finish out his great career.

This is actually our first time featuring a Panini card in this Card of the Day series. I didn’t know that until right before I typed that last sentence. I was just curious as to whether or not I used this particular set. I didn’t know that I ignored the entire work of the company up until this point. Panini didn’t have the rights to use team names, so every reference to the Pirates on the card calls them just “Pittsburgh”. That lack of team rights led to something I thought was interesting with the photo on the Grimes card. I later found out from checking other cards in the set, that it was something Panini did often in this particular set. Here’s a look at card #33 from the 2013 Cooperstown Panini set. 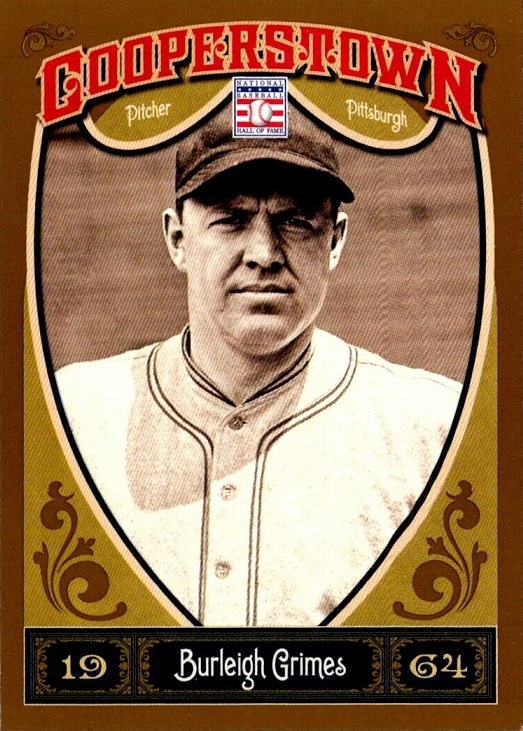 If you check out the photo of Grimes, you’ll notice there are no real indications that he’s a member of the Pirates. This is a photo from 1928 that you can find online under an image search. He’s standing with his hands on his hips and you can see the Pirates “P” logo on his sleeve in the original photo. Panini used the Cooperstown logo to block the “P” on his cap. If you check other cards from this set, that Cooperstown logo is covering a few other logos on caps. What’s funny is that the Josh Gibson and Satchel Paige cards, which show them on the Kansas City Monarchs, has them in full uniform, with nothing blocked out. So if you didn’t know any better, then it just looks like there are two seemingly random cards in the set that include logos.

I’m a fan of the front design of this set. It really has the old school look, pulling some ideas from the T204 set, which is a set that hasn’t been featured here because they didn’t have any Pirates players in the 121-card set from 1909. That’s a rare set that has quite a few vintage fans who like the quality work in the front design. I might feature it here at some point just to show off the set, but I’ll use someone who played for the Pirates during their career. The ornate design at the bottom for his name and the year that he made the Hall of Fame (1964) looks really cool. 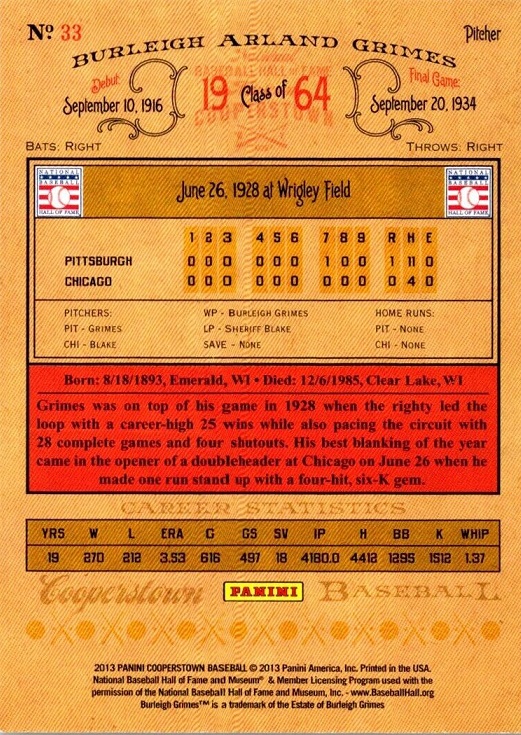 The back keeps with the old school look, except that section for some fun facts about his 1928 season. That bright red with normal writing looks a bit out of place here, as the rest of the back has the vintage feel to it. The back highlights his best performance from that season by including a partial boxscore of the June 26th game in which he threw a 1-0 shutout. The opposing pitcher was Sheriff Blake, who started his big league career with the 1920 Pirates. They gave him six relief appearances, totaling 13.1 innings, then moved on. He was only 20 years old at the time and still had a decent career ahead of him. In a bit of a twist, Blake led the league with four shutouts that season

I did not know until I saw this card that Burleigh Grimes is a trademark of the Estate of Burleigh Grimes. There’s actually a website dedicated to Grimes that you have to go through to get the rights to use his name.

If you’re interested in this card of the Hall of Fame pitcher who was a three-time member of the Pirates, you’ll be happy to find out that there are numerous options on Ebay for $2 (or less) delivered. There are variations of this card as well. One is numbered to 399 copies and it’s called Crystal Red, which is a description of the front border. One person has that card for $2, so it’s a cheap version of a rare card. There are other border variations that aren’t going for much more, including a Crystal Green, Crystal Blue (499 copies), Crystal Gold (299) and Crystal Orange/Matrix (325), and well as a 1:1 Black Crystal. All except that last one can be found on Ebay for under $10.