Way back in 1963, Fleer put out a set of 67 cards that included active players. Topps had a strangehold on the majors at the time, and the 1963 Fleer set was just a one-year attempt to compete with the baseball card giant. Their plan failed and a court case led to Fleer halting printing, with plans canceled for more cards in their 1963 set. It would be another 18 years before Fleer printed cards with active players again.

Forty years after their failed attempt to compete in the baseball card market, Fleer used a throwback design to their 1963 set, and they called it the 2003 Fleer Tradition set. Today’s Card of the Day comes from the Update version of that set. Our featured player is relief pitcher Brian Boehringer, who played for the 2002-04 Pittsburgh Pirates. His best season with the Pirates was his 2002 campaign, which is highlighted on the back of this card. This is card #U179 in the set. 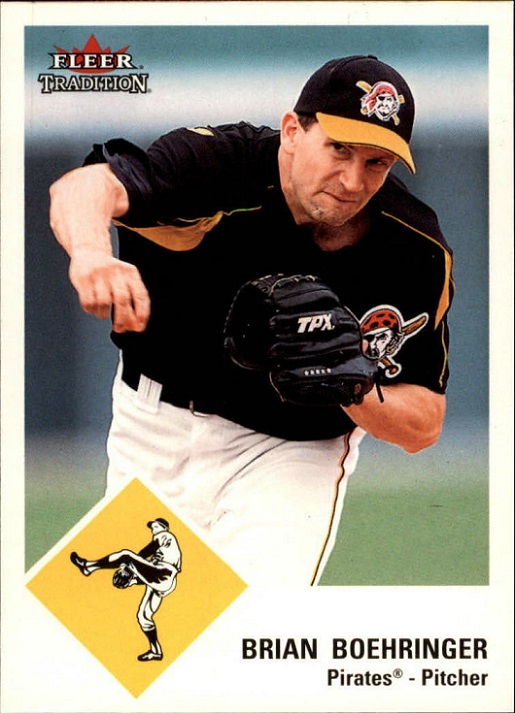 The design of this set just screams old school. The original set had a player on the front in a yellow diamond as well, which matched up to the player. Only right-handed pitchers like Boehringer would have that particular photo, while there were others that showed a hitter, fielder and left-handed pitcher. The white border with plain black writing for the name/team name/position is also straight from the 1963 set. The Fleer Tradition logo in one giveaway that this isn’t an original card, while the photo quality would be the other easy tell between the two sets.

That’s a great action shot of Boehringer, with two looks at that great Pirates logo. I’m not a fan of that particular cap, but I do love that logo. 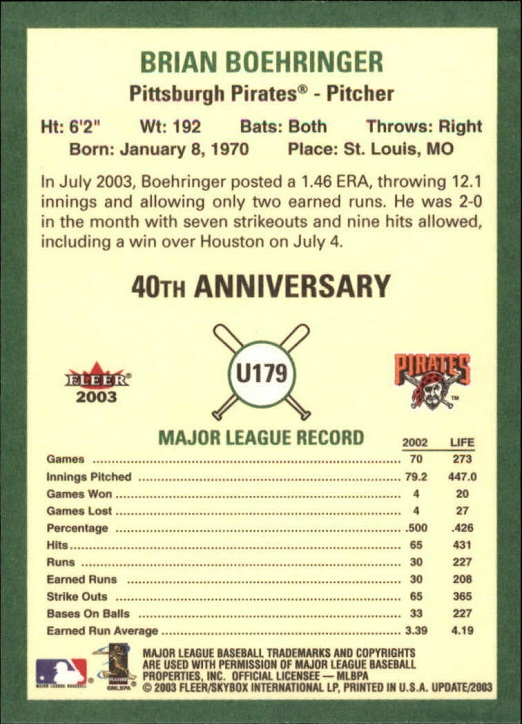 This has the same set up as the 1963 Fleer set, but there are so many distractions that makes it tough to say it’s a great comparison. They kept the same setup/categories for stats and old school wording, such as percentage written out for winning%, or games won/games lost. Both sets used green borders around the back. The player info/bio section is the same, and both sets used the cross bats/baseball logo for the card number. The original set had almost no legal junk at the bottom, with three extra lines and two logos added on the new card. You also didn’t have the Fleer 2003 logo, the Pirates logo (that I don’t mind), and the big “40th anniversary” across the middle. It’s very similar and retains some of that old school feel, but it’s also so much more cluttered. A card from 1963 had much more room for bio info. That was taken away by the legal nonsense at the bottom and the 40th anniversary writing.

If you are interested in purchasing this card, there aren’t many options right now on Ebay. One of them is a glossy version numbered to 100. That is barely more than the only regular copy, with both in the $3-$4 range. The only other option is an autographed copy, and that seller wants $12 delivered for that copy. The only sold version in the last three months went for $5, to someone who overpaid for shipping. Someone has the Pirates 18-card set from the entire set (regular and update) and they want $19, though it has a best offer option.

8 Jan at 12:01 am
Card of the Day
Brian Boehringer, Featured