Today’s Card of the Day features Jim Pendleton, a utility fielder for the 1957-58 Pittsburgh Pirates, who was part of an important trade in team history. He was one of four players sent to the Cincinnati Reds in the seven-player deal that brought Smoky Burgess, Don Hoak and Harvey Haddix to the Pirates. That trade played a big role in the Pirates winning the 1960 World Series.

Pendleton hasn’t appeared in this series yet. He has three Topps cards that show him as a member of the Pirates, debuting on the team in the 1957 set. He was in the 1958 Topps set, and he appeared in the 1959 set, even though he was traded to the Reds in January of that season. I believe this is a first in our nearly three years of doing this daily series. I let the cartoon on the back decided which of his three cards I was going to use today. As usual, we start with the front of the card, which is #174 in the set. 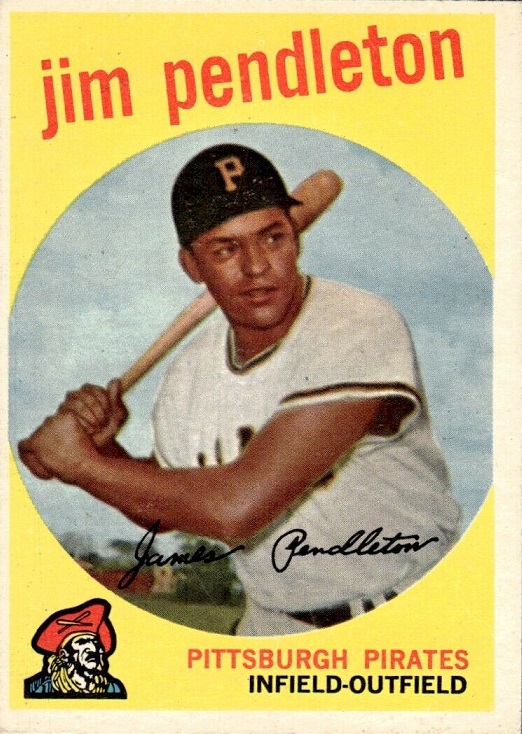 Let me just say that if the 1959 set used black writing for his name up top, I would like this card a little more. It would match Pirates colors, though I don’t mind the red in the team logo there in the bottom left corner. The Pirates actually switched to a new logo in 1958. I’m sure you’ve seen the overly cartoonish one for the 1960 World Series champs, which I only appreciate due to the connection to a title. I’m not a fan of that one, especially not compared to the one you see here.

I mentioned matching team colors, but that’s not something they did in this set. It’s just a coincidence he has the Pirates gold/yellow. You can find Pirates players with green (two shades), pink and orange around the photos. There are also cards in the set with red and blue borders. You can also find their players with real color photos instead of the colorized photo you see here for Pendleton. That’s not common in the set, but it’s something Topps did often in the early years. 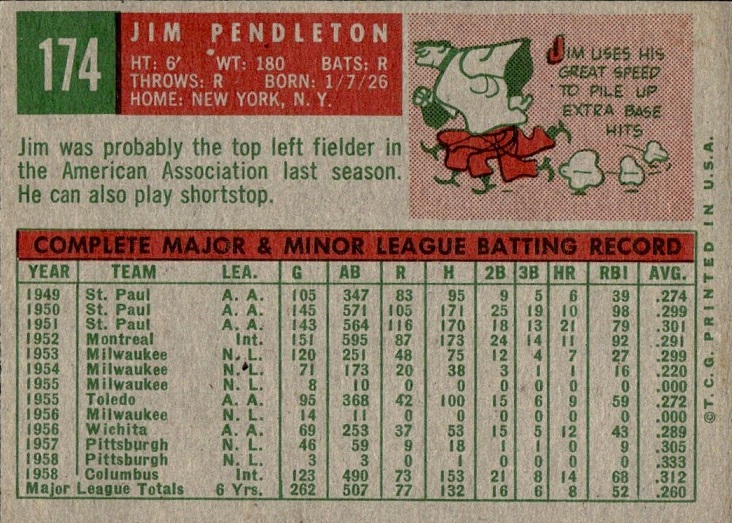 The back of this card reminds me of Christmas, so I like it. Especially since I’m writing this up a short time after Christmas. I also like that they had all of his stats, though it’s missing his 1948 Negro League stats, which are now counted as his first big league stats. I included them in his bio in today’s history article, though I’ll note that Negro League stats are incomplete, so those could change at any time that research uncovers a new boxscore for the league.

I guess the Christmas colors helped pick this card, but I really liked two other things here. One is that they said “Jim was probably the top left fielder…”, as in they’re just guessing that no one was better based on how he did. The other is the photo of Generic Gray Topps Man with five legs. I’ve always said that he has the versatility to play any player in baseball, while looking like none of them. I study baseball history every single day, including plenty of things I don’t share here because it’s not Pirates related, but I’ve never read about a player with five legs.

I didn’t mention it up top, but the back tells you that he was born 96 years ago today. He actually fibbed about his age, which was not at all rare at any point in baseball history. He was actually born 98 years ago today.

This card is easy to find on Ebay, and you have your choices of grades. The highest priced one that isn’t unreasonable is a PSA 8 for $79. Another auction has the same grade going for $61. A PSA 6 is listed for $25. If you just want one in decent shape (ungraded), you shouldn’t pay more than $5. There are over 200 auctions for this card and plenty around that price. I found a nice looking one for $2.25 that would probably grade a PSA 5. So you can get a nice example for cheap by looking around.