Today’s Card of the Day selection came about due to the popularity of an innocent tweet by me. I saw the new 2022 Bowman Draft card of Pittsburgh Pirates 2022 first round pick Termarr Johnson. I decided to share the photo, figuring about 15-20 people would like the photo, maybe get a comment or two as well. I received those two comments, as well as a few retweets. It also had 141 likes as of the writing of this article. Here’s the tweet, which isn’t the card we are looking at today.

A look at the first Bowman Draft card of Termarr Johnson #Pirates pic.twitter.com/6lJAgaWz6a

One of those responses was someone asking me if I saw the image variation of the card. I did not at that point because there weren’t any on Ebay when I first checked, though I did see two later that day, and there was also a completed auction. The popularity of the tweet made me decide to feature Termarr Johnson here, but the rarity of the image variation card made me decide to feature that one instead. Technically you’re seeing the regular base card too, so you’re getting a bit extra in this article.

Here’s the front of the image variation: 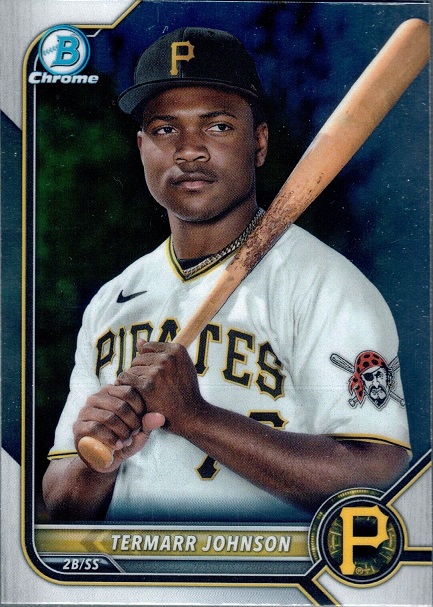 Usually I’m all in on action shots over staged action photos or portrait style photos. However, I like the image variation card better in this case. I believe the reason is the Pirates logo patch that is visible, as well as the Pirates cap not being blocked. The bottom one also just has that look of a future MLB slugger.

I’ll never be able to tell the years apart for the recent Bowman cards. They all look the same to me. However, I like the way this design uses the Pirates colors and it makes the current team logo look good. Not as good as the logo on his sleeve, but it’s good. 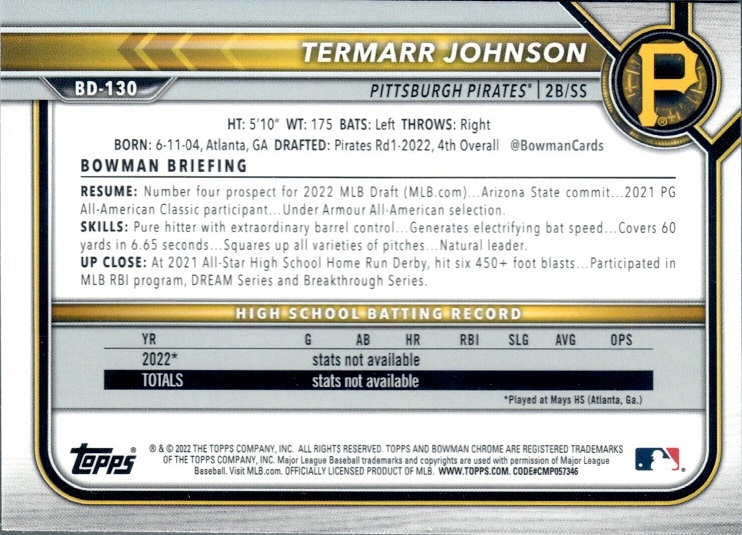 The back of this card keeps up the same idea with the Pirates colors being utilized, and they repeated the same look for the logo. I like the resume/skills/up close section here. They quick hit on a lot of important stuff. If you are a Pirates fan, you probably already know that his potential upside with the bat is high. I can vouch for that bat speed, and he even might swing too hard sometimes, like he’s trying to hit “450+ foot blasts” each at-bat. If you don’t know him as well, I think the best compliment he received multiple times is that people compared his batting to Wade Boggs. Nothing like setting the bar high with one of the best pure hitters of my lifetime.

I’m not going to give a price range for this card because it is too new. The price of new cards is usually very high at the start, as there is a rush for people to get the card, and sellers capitalize on that desire. What I will say is that the first one that sold went for $75. There is also an autographed version of the card, numbered to 99, and those are currently just redemption cards that you mail in for the autograph. Those are selling for well over $200. If you want this particular card, I’d wait for it. In the meantime, you can pick up one of the regular cards for around $5, and that should be going down slightly as well.