It’s not every day that a former Pittsburgh Pirates player turns 95 years old. Today is one of those exceptions. Bob Oldis, who was a catcher for the 1960 World Series champs, celebrates his 95th birthday today. At the time of this write-up, he’s the 17th oldest living baseball player, and the second oldest Pirates player behind Bobby Shantz.

Oldis appeared in our Card of the Day series two years ago on his 93rd birthday. I had a choice that day between two cards from his playing days. I could have went with his 1960 Topps or his 1961 Topps. While making that decision to use his 1960 Topps card, I was basically making today’s decision as well. I say “basically”, because he has a post-playing career card that shows him on the Pirates, which will be featured here at some point in the future. For now, we look at his 1961 Topps card, which is #149 in the set. 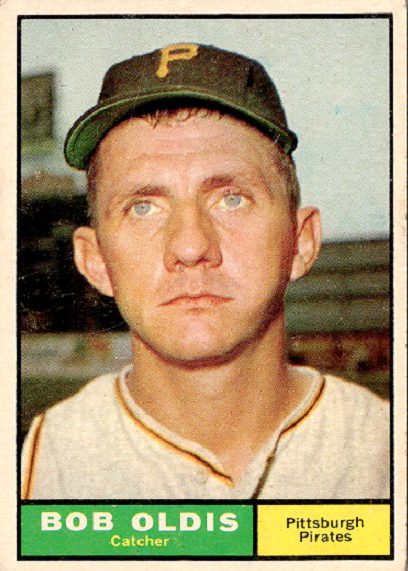 The 1961 Topps set feels like they took off a year to celebrate the 1960 design, then came back with the 1962 design. It’s clearly a thorn between two roses. The 1960 set has such a great design with the horizontal look and two photos. The 1962 set is one of my favorite sets with the wood-grain border and slightly folded up bottom corner photo idea. Then there’s this set that can be best described by the look that Oldis is making on the card.

I will say two nice things about this set design. One is standard for this era, and that’s the great photos of the older players from well before my time. This was no doubt taken during the 1960 championship season. The other is a partial credit for the Pirates colors used for the team name box. Even that has a bit of a boring look though, like someone typed it in there as an afterthought. 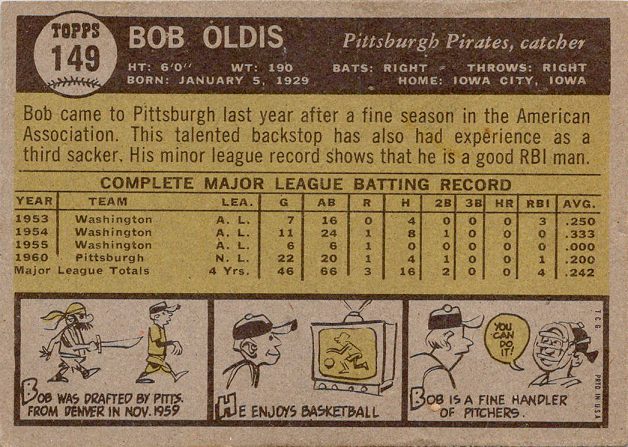 The back is a little better than the front, at least in the design. It must have been a boring year at Topps because they just went with a blah front design and blah blah color for the back. You have to love the three appearances of Generic Gray Topps Man. Here’s what I like about these cartoons. They make it seem like he was kidnapped and forced to play for the Pirates. He watches basketball in his baseball uniform. The third cartoon makes me think about The Waterboy. You can do it!

The last cartoon makes me think that we really overvalue catchers who they say work well with pitchers. I just told my two-year-old nephew he could turn on a light switch and he did. That doesn’t make me a great uncle. Next thing you’ll tell me is that catchers give their pitchers cookies when the manager isn’t looking.

If you’re reading this article before today’s daily history article that has eight updated player bios, including Oldis, then I’ll point out that his stats show quite a gap between big league appearances. That had to be cool for him, because his only prior MLB experience was a team that won almost nothing in their existence. That was better than playing in the minors for all of 1956 through 1959, but when he finally made it back, he wins a World Series ring.

If you’re interested in this card, which means you probably already have his 1960 card, then you can get this one for about $3 delivered in semi-nice shape. If you want a high grade one, it won’t break the bank. A PSA 8 can be had for $27, or a PSA 7 for $20. You can also spend around $12-$15 for an autographed copy. Obviously he has had a lot of time to sign these cards. This set is not hard to find and not popular either, which makes it a nice set from this era for a budget collector. Of course some cards will be costly, but I’m talking about relative to other more popular sets.