This is the first time I’m featuring All-Star catcher Lance Parrish here, and it’s also the first time that we are looking at the 1995 Fleer set. I thought Parrish was used here once before because we have a picture in our library of one of his cards that we have used for photos on articles. I assumed that we used that picture for a Card of the Day article first, but I was wrong.

Parrish didn’t have much of a career with the Pittsburgh Pirates, but he had a great career that seems to be under-appreciated. He was an eight-time All-Star, three-time Gold Glove winner and six-time Silver Slugger winner, who is one of the few catchers to hit over 300 homers. When his name showed up on the Hall of Fame ballot in 2001, he received nine votes and dropped off of the ballot.

The 1995 Fleer set is the 1996 Lance Parrish of baseball sets. Parrish played for the 1994 Pirates, then became a free agent and signed with the Kansas City Royals. On this date in 1996, he signed as a free agent with the Pirates. That amounted to him hitting .190 in Spring Training before being released. Someone should have been released from their job for creating the 1995 Fleer set. Parrish is card #487 in the set. 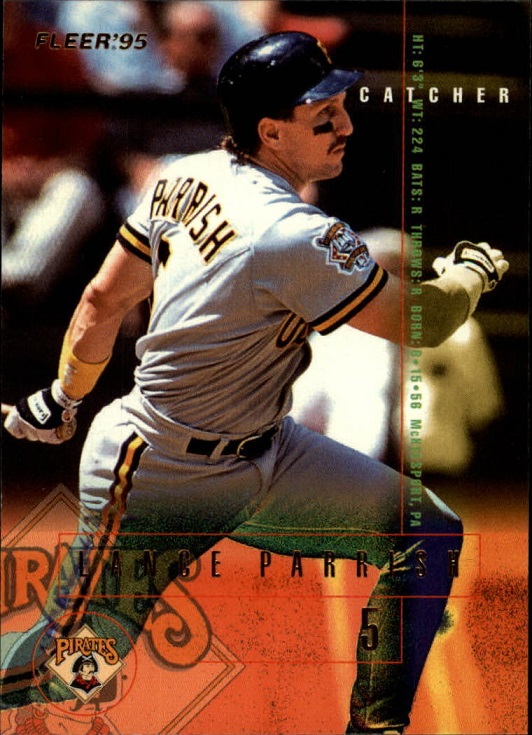 There’s so many strange things going on here. So I’m just going to do a list of me questioning things.

Why did they put a tiny logo over the face of a bigger logo that is only partially on the card?

Why is his name hidden?

What is going on with the reddish background at the bottom and what is around his one leg?

Why are things like his height, weight, birthplace etc on the front of the card, written in small letters going top to bottom?

Here are the things I like about the card.

The 1994 All-Star patch being visible. 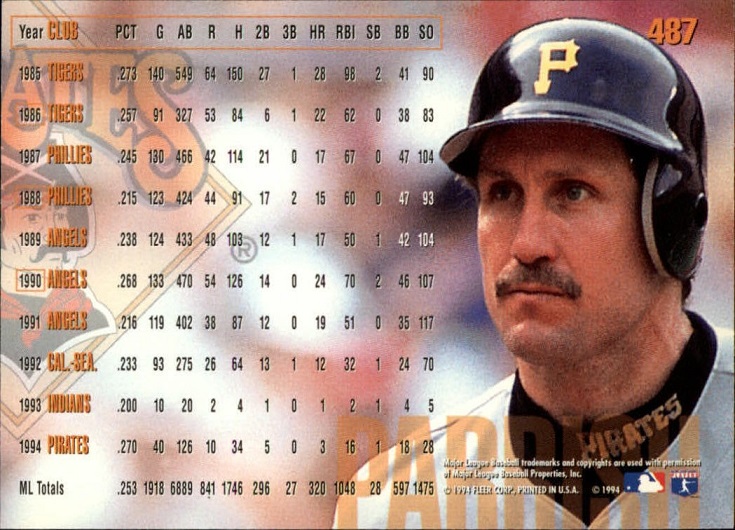 What is with the partial logos? The face Parrish is making is the same look I have right now. Here’s something interesting. Parrish didn’t start his career in 1985. They don’t even tell you it’s partial career stats. In fact, they barely tell you anything on the back because they put things on the front that don’t belong on the front of cards.  Why is 1990 in a box? Why are his walk/strikeout stats for 1988-89 different colors?

It’s not the front

If you’re interested in adding this card to your collection, I’d be shocked. Maybe you want a card of a great catcher on the Pirates. That I can understand. He has other options though. Let’s just say that you like odd stuff and want the card anyway, so you’re saying “Just tell me the price, John!”. There are exactly two people on Ebay selling this card right now. One has $5 for a shipping charge and $2.50 for the card. The other has 99 cents for shipping and 99 cents for the card. I’ll let you decide which one is better. Unlike choosing between the front and back of this card to see which one is better, there is a correct answer.