Today’s Card of the Day subject is Gus Suhr, who was born on this date 1906. He played first base for the Pittsburgh Pirates for almost all of the 1930s, debuting in 1930, and staying around until he was traded during the 1939 season. He really did play almost all of the games during that time. Suhr had a consecutive games played streak of 822 games, which included every single game of the 1932-36 seasons, as well as part of 1931 and 1937. In two of those seasons (1932-33), he played every single inning of the season at first base for the Pirates. That streak was almost three full years, but he left the final game of the 1934 season after his first at-bat.

Today’s Card of the Day is from the 1935 Diamond Stars set, put out by the National Chicle Company. The set was actually released over three years from 1934 through 1936. Suhr is card #56 in the set, and his card was released during the second year of printing. This set was featured here back in April of 2021, when we took a look at pitcher Red Lucas. That card was also released in 1935. Here’s a look at Suhr’s card from this very unique set. 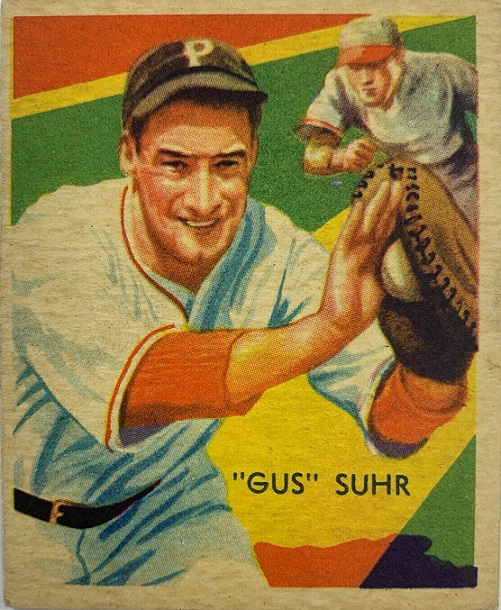 This set certainly has its own thing going on. They are definitely colorful, even if those colors don’t all make sense. I have no idea what those colors are supposed to represent. I also don’t know what’s on the side of the face of the runner. I’m not sure if that’s supposed to be a shadow on the ground, even though it looks like a sunbeam is directly on him so his shadow would be going the other way. It’s possibly an oil spill, which wouldn’t be a bad way to prevent runners from reaching first base.

The artwork here is wild, yet that’s a really good representation of “Gus” (his actual name was August).  I’m surprised he played all of those consecutive games when it looks like his thumb probably got crushed from that ball. I’d recommend not catching like that, even though he looks perfectly fine doing it. These cards measure 2-3/8″ by 2-7/8″. 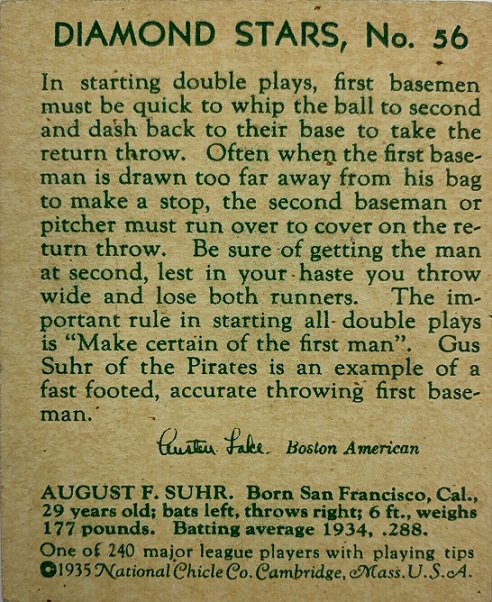 The backs of these cards all have either helpful tips or a bio for the player. This one tells you how to start a double play as a first baseman, which Suhr was apparently good at doing. The tips are attributed to a writer from Boston named Austen Lake. You can see the recognized set name at the top, and the company name at the bottom, which some sources also use for the set.

Suhr was born on the west coast, and his minor league career included him playing a total of eight seasons for his hometown team, the San Francisco Seals of the Pacific Coast League. This card credits him with hitting .288 during the 1934 season, but current stats show a .283 average that year. The card also lists a middle name starting with “F”, but his middle name was Richard.

The complete auctions over the last three months have two of note. There’s a PSA 7 that ended for $128. There’s also an authenticated signature on the card, which went for $91.