Today’s Card of the Day came from a very limited selection for available players born on January 2nd. There have been seven former Pittsburgh Pirates born on this date, which sounds like a decent amount to choose from for a card subject. That is until you look at the players and realize that six of them don’t have card options with the Pirates. Almost all of those players don’t even have any card options at all, regardless of the team. Then there’s Jeff Suppan.

Suppan was a workhorse pitcher who signed with the Pirates as a free agent in January of 2003. His full amount of time with the team was exactly six months, as he was dealt away at the 2003 trade deadline, in a deal that brought Freddy Sanchez to the Pirates. Suppan didn’t have many Pirates cards due to his timing. It was too late to get on the early 2003 releases, and he was gone before he could end up on late releases. Topps got him included in their regular set though, so that’s where we go for our Card of the Day.

The last time we featured the 2003 Topps set was just over one year ago when Matt Stairs made an appearance in this series. He spent more time as a member of the Pirates, but he didn’t have many card options either. Neither Suppan nor Stairs will be regulars in this series, but this is the first time for Suppan, so let’s look at card #381 for the 2003 Topps set. 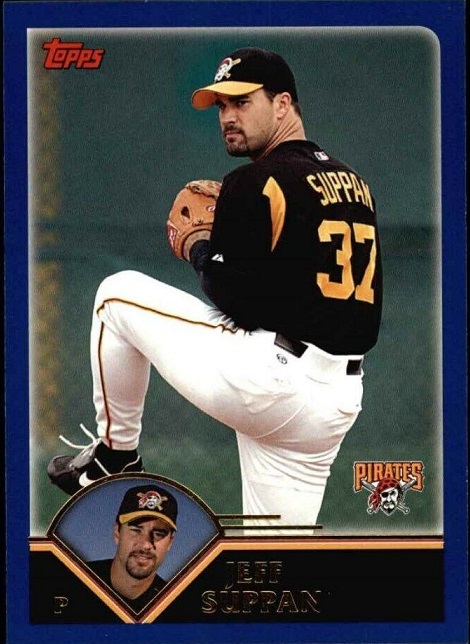 Any hockey history buffs out there? I’m not really one (at least nothing close to my baseball knowledge), but I do know that the separator between the photos and the section with the name looks like it was pulled from an old Vancouver Canucks jersey. I like the blue borders on these cards. The pricing section has a variation of the card that looks much nicer, but these still look good. I like the second photo inside a baseball field shape (should have used PNC Park dimensions), but I hate the dark name/position print on a dark background. They included the Pirates logo, which is always a plus. 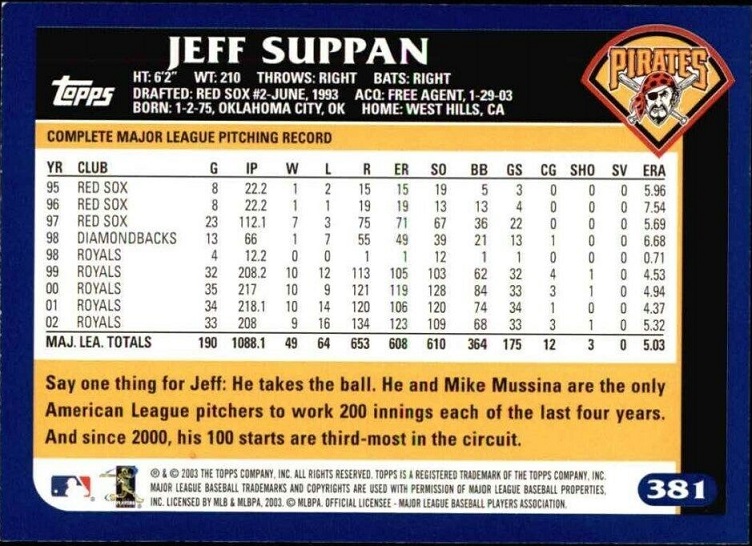 The back has a second Pirates logo bigger than the first. No hate here for that, feel free to include team logos on both sides always, even with the boring current logo design. The bottom part mentions that he pitches 200 innings every year and he did it again in 2003, though only 141 of his 204 innings came in Pittsburgh. The rest were in Boston. I definitely appreciate that the included black writing on a white background for the stats. That should be standard, unless you have some amazing back design like the 1993 Fleer Ultra set.

One thing I’ll note here and you can sort of see it in the scan. Putting dark blue borders on both sides really makes any at all border damage stand out, even the tiniest amounts that you wouldn’t notice on a white border.

There are variations of this card, which I will tell you about, but I don’t recommend spending much money on unless you really like the look. I can’t imagine a future demand for a card for a common player, just because there are limited available. The 2003 Topps set itself isn’t anything special, but I’m sure there are some people collecting subsets, and these cards are mostly for them…or a Jeff Suppan collector. There are collectors out there for every player, so I’m sure a solid pitcher with a decent career has a few as well.

There’s a black border variation that actually looks really cool, and it was limited to 52 copies. There’s an XFractor variation with 57 copies. Both are on Ebay and over $10 each. There’s a Home Team Advantage card with a special gold foil logo. There’s gold border variation, a gold refractor, a Chrome refractor and a black border refractor, which has 199 copies. All of those are under $10 delivered, which is the same price range of his autographed cards (not factory released autographs). The regular base card and the gold border that is numbered to 2,003, can both be had for $2-$3 delivered.