Hank Greenberg is one of the all-time greatest hitters ever. He spent one important season with the Pittsburgh Pirates. He served as a mentor for a young Ralph Kiner in 1947, as the two Hall of Famers formed one of the best 1-2 punches in team history.

Today is the birth date of Hank Greenberg. I’d love to feature him here every year on his birthday, but the fact that he played one season for the Pirates in 1947, means that there aren’t a lot of card options out there. He played the rest of his big league career with the Detroit Tigers, so very few sets made post-playing days would choose to show him on the Pirates. We featured his 1948 R346 card back in April, which is from a very rare set. To get him pictured with the Pirates, I had to stretch the definition of card ever so slightly.

The 1973-80 TCMA All-Time Greats set was actually a group of postcards, as you will see in the back scan below. They have the look of cards, so it’s close enough for me. You can’t be picky if you want Greenberg on the Pirates. This particular card utilizes a famous photo of Kiner and Greenberg. It was produced in 1975. Greenberg has another Pirates card from TCMA, so this won’t be his final appearance in this series. 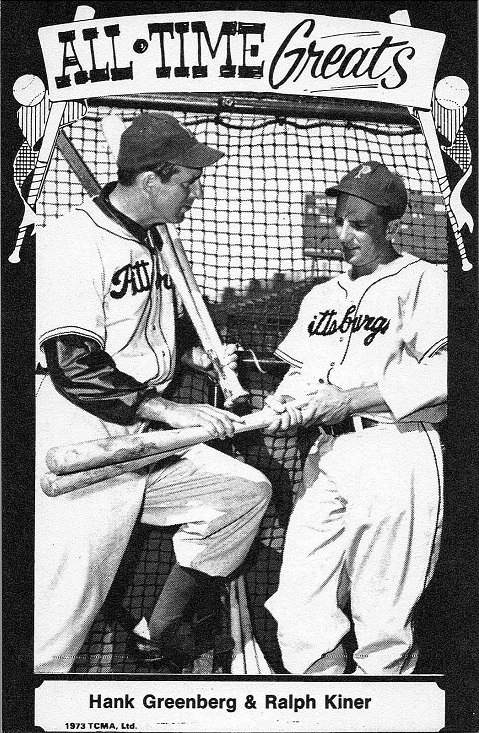 As I mentioned, this is a famous picture of Greenberg and Kiner. It’s supposed to represent the all-time great mentoring someone who had potential to be an all-time great. Kiner had one season in the majors before Greenberg joined the team. He hit 23 homers, which led the National League, but he also hit .247 and struck out 109 times during an era where guys had a two-strike approach to try to cut down on strikeouts.

Greenberg got Kiner to take more batting practice, encouraging him to pull the ball more often to take advantage of the shorter distances at his home park. Forbes Field was specifically designed to cut out any cheap homers, but the Pirates realized after one season that they could take advantage of Kiner’s power. They shortened the fence in left field to a more normal distance. He ended up hitting 28 of his 51 homers at home in 1947. Not only that, he dropped down to 81 strikeouts, while batting 87 more times than the previous season. 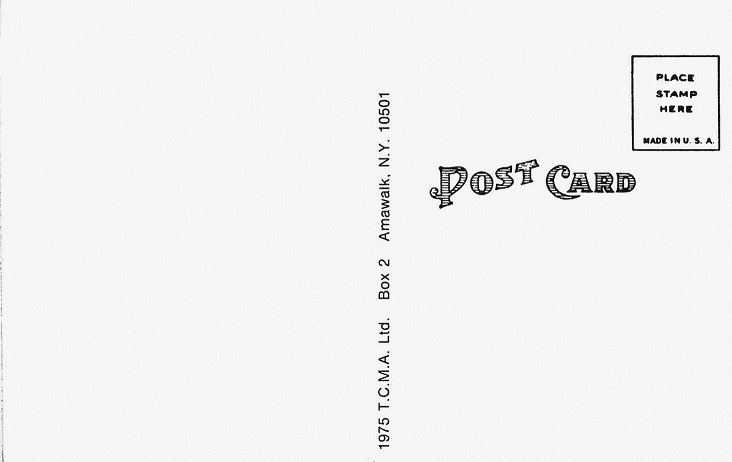 A few people have asked what TCMA stands for, so I figured I’d answer that here, since there’s nothing exciting about a back of a postcard with no baseball info. There’s nothing exciting about the name either. It’s just the initials of the people who started the company. I tried to figure it out many moons ago as a wee lad by guessing Trading Card something or other, Manufacturer of America maybe? Seemed like a good guess. Nope, nothing to do with cards. Just two guys named Tom Collier and Michael Aronstein, who decided to make cards together. The end.

If you would like this postcard/card of two all-time greats on the Pirates, you’ll be happy to know that you can get it for $6-$7 (or cheaper) from two sellers who have it listed with the best offer option on Ebay. There are two interesting options. One is signed by Greenberg, who passed away in 1986. The asking price is $135. He was a Hall of Famer for 30 years before he passed away, so he had plenty of time to sign things, but his signatures are still tougher to find than Kiner’s, who signed frequently at shows late into his life. There’s definitely a disparity in their autograph availability. The other auction of note is signed by both players and the cost is $160. That price difference reflects the availability of Kiner’s autograph, though you have to take into the account that this is a pretty specific item. I’m sure they signed other things together, definitely baseballs, but not much else that isolates them. For a Pirates collector, that auction is a great item.

1 Jan at 12:01 am
Card of the Day
Featured, Hank Greenberg, Ralph Kiner