Card of the Day: 2022 Topps Turn Back the Clock Roberto Clemente

Today is the 50th anniversary of the tragic passing of Roberto Clemente. You will read all about him today from other sources, as they celebrate the great man and legendary baseball player. Each year I try to do something a little different because I know he’s going to be covered in great detail all day. Today I tried to find the perfect Card of the Day choice for this day.

Clemente has been featured in our Card of the Day series more than anyone. That’s no surprise, because he’s the most popular player in team history. He also has more cards available than any other Pittsburgh Pirates player. He’s constantly getting new cards produced. Search “2022 Roberto Clemente” under the cards section on Ebay and you’ll find numerous options. That same thing works if you change the year, going back a little way. I picked one of those 2022 card to use today because it has the photo that I thought was perfect for the occasion.

Topps has a Turn Back the Clock series where they print cards to order and sell them for 24 hours. Whatever the amount of cards ordered during that time frame is the exact amount that they print out. This particular Clemente card was on sale during the anniversary of his 3,000th hit, and they sold 869 copies. Even though it’s a 2022 card, it very rare for a Clemente card. Here’s a look at card #184 in the 2022 Turn Back the Clock series from Topps. 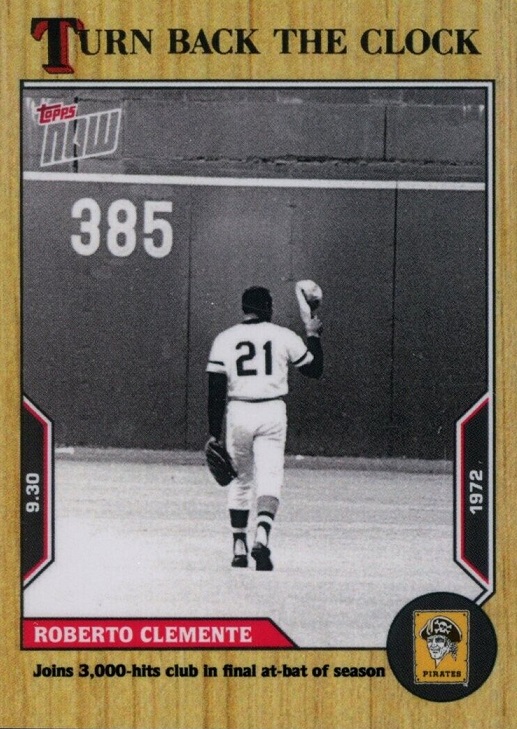 Topps utilized their 1987 design for the 35th anniversary of the set. It could possibly be my favorite looking set of all-time (1956 Topps has a good case, as do some older sets). They included the design in multiple set, including their Turn Back the Clock series. This famous photo of Clemente just feels perfect for today. He’s walking away from the camera, tipping his cap to the adoring fans. I also love the use of a black and white photo here. The topper here with the card itself is that great Pirates logo 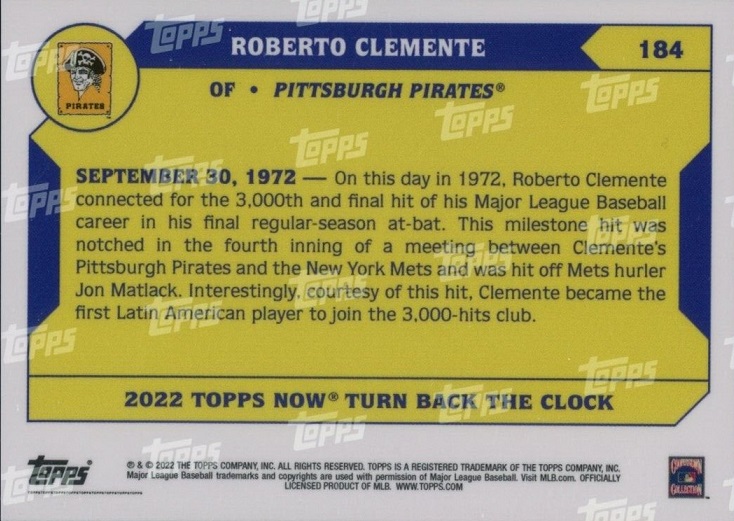 A quick little story here in case other people think the same way. As a kid I was told that Clemente got a hit in his last at-bat, and I assumed if he didn’t get a hit in that at-bat, he would have forever been one short. It wasn’t until later on that I realized that he just took the rest of the season off after collecting the hit. If he didn’t get that hit, he still would have had at least 14 more chances before the season ended. Did you know that Bill Mazeroski pinch-hit for him that day? You don’t get too many instances of a Hall of Famer pinch-hitting for a Hall of Famer (unless the latter was a pitcher).

I also didn’t know that it wasn’t his last game. He played an inning of defense on the final day of the season. It was actually said that he played so he could break the team record of Honus Wagner for games played, but as it turned out, Wagner’s number was off by one, so they ended up tied. In a way, it worked out perfect, with the two best players in team history playing the same amount of games. It just didn’t happen how you would want it to happen.

One final thing is that his 3,000th hit wasn’t his final big league hit. It was his final regular season hit. The Pirates made the playoffs that year and Clemente picked up four more hits.

Sometimes the wording will throw people off, so I figured I’d try to clear that up for any people who thought the same way I did when I first heard about the 3,000th hit.

If you’re interested in picking up that card, it originally sold for $5, and that’s about the price you will pay now for one. There won’t be many up on Ebay at any one time due to the limited quantity, and more copies have sold in the last three months than there are copies currently for sale.