If you have a great memory and check these Card of the Day articles daily, today’s card selection is going to look very similar. I originally planned to just pick a random player today because there isn’t much to match up to for the daily history article, but then thought this 1916 M101-5 could make a great deep dive into the workings of early baseball cards.

James Viox played his entire big league career with the Pittsburgh Pirates. He debuted in 1912, and he played his final game in 1916. Playing until 1916 made a huge difference in what is available for him in the baseball card world. However, that huge difference loses some luster when you realize that all of the options looking the same.

A bunch of companies used the pose/card you see below to advertise their products. The advertisements were all on the backs, so I could feature James Viox here 19 times using this same looking card front, but they would all be different cards. That would get a bit tedious over time, so instead I’m going to stop it at two examples. The first example was posted a year ago today (Viox was born on this date in 1890) and that set is labeled as M101-4, which is a Sporting News card. Today’s card is also a Sporting News card on front, but since those cards were blank backs, I decided to pull a scan from a different card just to show a back possibility. 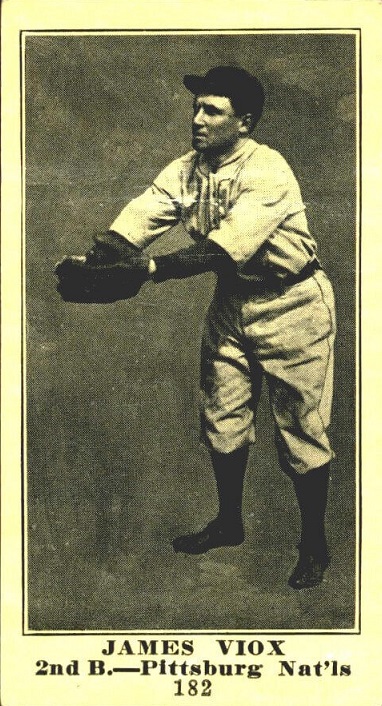 I mentioned that the M101-4 and M101-5 had the same design and same photo. The top 83.2% of both cards are exactly the same.  I mentioned this in the other article, but it seems odd that they airbrushed the rest of the card out. They didn’t do that for most of the set, so I’m not sure why he didn’t get a standard baseball background (grass/stands/fence, etc). Sometimes you can find the original photo to match up. I checked a year ago and couldn’t find it, and still couldn’t find it today.

The way to tell the M101-4 and M101-5 apart for Viox is that they changed his position and card number. If you’re looking at just the bottom of the card under the photo, his name is the same on both cards, then the M101-4 has him listed at 3rd base (3rd B.) and the card number is 180 instead of 182. Labeling him as a third baseman tells you about the timing of these 1916 sets. He was the Pirates starting third baseman in April of 1915 and April of 1916. He played a total of 23 games at third base during those two Aprils. He played 31 games at third base during his five-year career, so the only times you would call him a third baseman is for two weeks in 1915 and two weeks in 1916. The only position he played from May of 1916 until the end of his big league career was second base.

Here’s the back of a M101-5 card with the Famous & Barr advertisement: 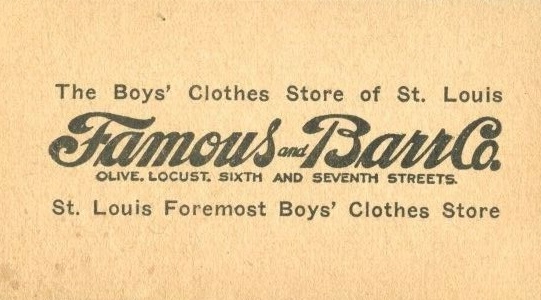 This is just one of six possibilities for a back on a 1916 M101-5 card of Viox. One of those six is a blank back, which is what the front scan above had. Since looking at a blank piece of cardboard is boring, I picked one of the other backs to show off. That Famous and Barr Company was eventually bought by Macy’s and the store listed on the back was around until 2013. It was originally founded in 1911.

If you want this Viox card, I’d say don’t limit your options. Unless you really care about the position/card number, go for whatever comes up from the M101-4 or M101-5 set. Some of the backs are more collectible because they are harder to find, but those are for more advanced collectors. The front scan you see above is from a card that sold for $44 earlier this month. There are currently none available on Ebay.