Today is the birth date of Clyde Barnhart, who played his entire nine-year Major League career with the Pittsburgh Pirates. He’s also one of six father-son combos in team history. His son Vic Barnhart played for the 1944-46 Pirates. Clyde was a key player during the 1920s, putting up a few 800+ OPS seasons, including the 1925 and 1927 seasons when the Pirates went to the World Series. His best year came in 1923, when he had a .324 average and a .972 OPS that ranked third in the National League. He was mostly a steady player back then, with above average offense and below average defense, giving him 9.2 career WAR, with 8.5 of that coming in the aforementioned 1923-1925-1927 seasons.

This is the second appearance for Barnhart in this series. I’ve had to space out his appearances because he doesn’t have many card options, despite being a starter on two World Series teams. His first was his 1923-24 Exhibits card. If you check out that card, and today’s Card of the Day choice, you’ll find out it’s the same photo, but the two cards look so different that it doesn’t feel like the same picture is being used. For one, the Exhibits card has much better quality for the photo. That’s offset a bit by his 1922 E120 card having a much better looking design. There’s also a huge size difference in the cards, as the Exhibits is much bigger than your standard card size used today, while the E120 is smaller than today’s standard cards. 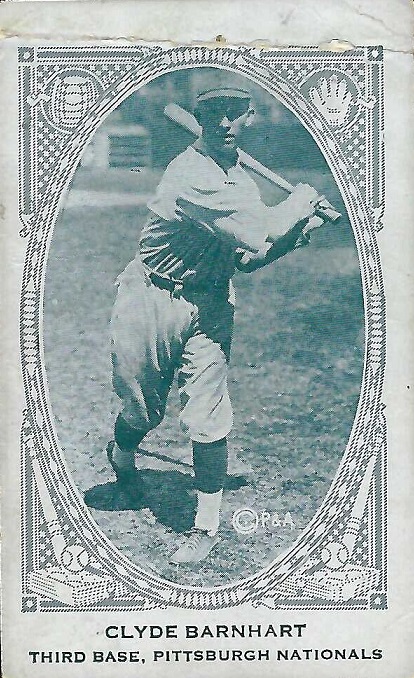 This is not a great photo as far as quality, which is odd because it came from a quality photo. Just compare this to the Exhibits card above. The Exhibits card was put out a year later. I like the design here because it was ornate for the time, but now it looks like something you would have printed out on a computer 25 years ago and thought it was cool that a computer could do that. Somehow this is both a throwback and a fast forward design at the same time.

Notice is says Pittsburgh Nationals here. Identifying a team by the league was popular back to do back then on cards. You will see “national” next to Pittsburgh much more often than you will see “Pirates” written on a card…but then check out the back. 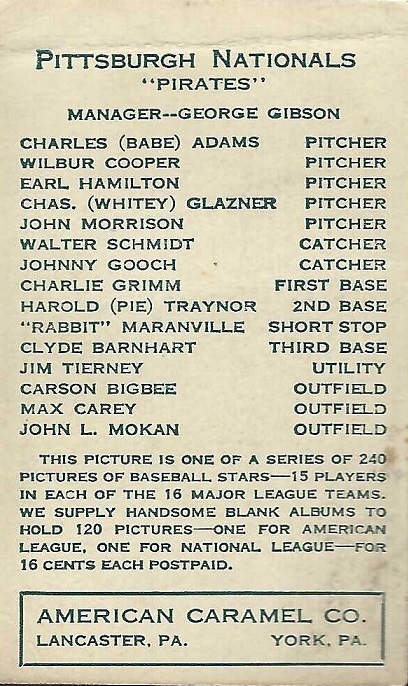 The back is a combo of a checklist for the set and an ad for the company that produced the set. The American Caramel Company is responsible for numerous great sets from around this same time period. The back also has an offer for a blank album to hold half of the cards in the set. That was nice of them I guess, so your American League and National League cards didn’t have to stay in the same album. Also notice at the top. They actually used “Pirates” on the card. Team names were still considered more of nicknames at this time, but you’ll find the occasional Pirates mention on some cards.

I’ve mentioned this before, but the first time I saw one of these backs years ago, I had no idea who Jim Tierney was, and why he was part of the Pirates set. It took more than a minute to realize it was Cotton Tierney, who is never referenced by his first name, except when you read older articles. Most also called him James, but that wouldn’t throw me off (compared to Jim) if I wasn’t used to seeing Cotton all of the time.

John Mokan is another interesting name on there for a different reason. He played 50 games over two seasons with the Pirates and had a .677 OPS during that time, so his appearance was definitely more about timing.

There are no active auctions for this card and I had to pull the scan from the only closed auction on Ebay. As you can see, the condition isn’t great. This card sold for $55 in a buy-it-now type of auction. Whether that’s a good price, I am not 100% sure (I’m leaning towards yes, since I’ve bid and lost on cards from this set before), but when it’s the only option, sometimes you just have to pay what they ask.