Today’s Card of the Day is finishing off a trifecta that I don’t think that I’ve accomplished previously in this series. I featured John Milner’s 1981 Topps card here two years ago today. He was born on this date in 1949, so the timing of today’s article isn’t a coincidence. In March of this year, I used Milner’s 1981 Donruss card for our Card of the Day. Those two cards have nearly identical poses, just cropped different so they don’t look exactly the same. The other major card from that year was produced by Fleer, so today’s card comes from that set. I don’t believe that I’ve used all three (or more) cards produced in the same year from any other player during the Topps/Donruss/Fleer era. With that in mind, let’s take a look at card #386 from the 1981 Fleer set, featuring 1B/OF John Milner. 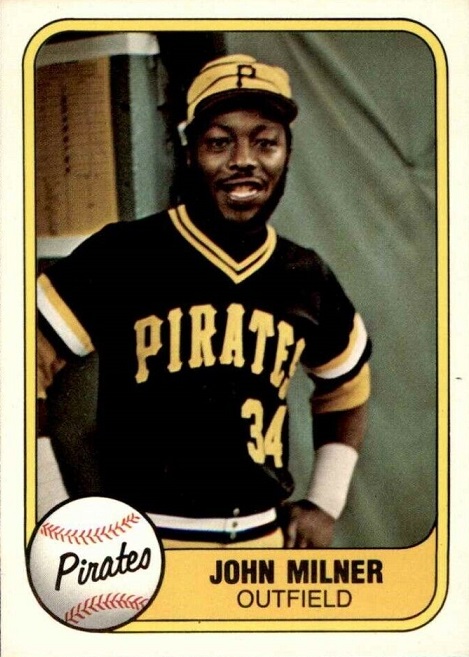 The fronts of these cards use team colors in the design, which was a great way for Fleer to kick off their first large set of cards. Fleer did produce earlier sets, but Topps had a stranglehold on the rights to current players until 1981 when Donruss and Fleer joined the party. That was great for Topps as it turned out, because it drew more attention to cards and the industry soon took off.

I’d say I’m planted somewhere in the middle when talking about the look of this set. It’s one of many sets where the Pirates cards look better than the entire set in general, especially when you see a card like this Milner, and he’s wearing the great uniform/hat from that era. Overall, it’s a good look. Not the best Fleer offering from the 80s, but definitely not the worst. 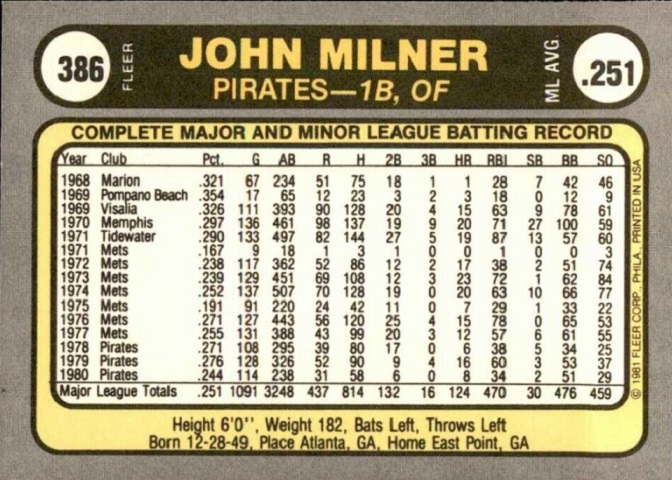 The backs of these cards look like they matched up to the Pirates colors, but that’s purely coincidence. All of the backs in the set have the same colors on back. Fleer did a great job of not only including all of his pro stats here, they made it easy to read with black writing on a white background. Despite that bland description, they added the two-color borders, one around the stats/bio, and one around everything. You can tell by those stats that Milner was a valuable lefty bat on the 1979 World Series champs. His production is on par with his best seasons, yet he wasn’t playing full-time. He was making the most of his playing time.

If you’re interested in getting one of these cards, there are plenty to choose from and you should have no trouble finding a nice one on Ebay around $2 delivered. The only two auctions of note are autographed copies. They are both around $20 delivered, and both have best offer options. They have very different looking autographs in that one is done in pen and it is written across the green background to the right of Milner, while the other is in blue marker and goes across his body. Personally, I’d want marker across the green. Milner passed away just after his 50th birthday in January of 2000, so his autographs aren’t plentiful. They’re not difficult either, but sometimes you have to settle if you’re looking for a specific card autographed by him.

The only sold auction for this card is something I always warn against. Someone bought a $1.50 auction with $4.50 shipping. There is no reason to ever do that for a common card. That shipping cost is twice what it should be if they were asking one cent for the card itself. Don’t pay 3x value for a common card, get three cards instead.