Jim Tobin is part of a hidden bad trade in Pittsburgh Pirates history that gets no mentions, except on this site of course. He was a workhorse pitcher, who threw a knuckleball, though he referred to it as a flutterball. He was also an excellent hitter for a pitcher. After three seasons in Pittsburgh, the Pirates traded him to the Boston Braves for pitcher Johnny Lanning. While the 27-year-old Tobin really put in work each season, the 29-year-old Lanning was not a workhorse by any means.

In essence, this transaction was a trade of a solid starting pitcher for a solid swing-man. It was hurt a bit by the fact that Lanning missed two seasons due to the war effort, while Tobin pitched right through that time. It still would have been a loss for the Pirates based on the innings difference, as well as the offense that Tobin provided, but it would have been closer. As it worked out, the Pirates got 6.6 WAR from Lanning over six seasons (one season was just one game), while the Braves received 20.3 WAR in six seasons. Basically, it was equal in value to the trade of a fifth starter for a 2nd/3rd starter, or a 1.1 WAR player for a 3.4 WAR player.

Unfortunately for the Pirates, they also threw in $7,500 into the deal. That is offset some by the difference in salaries between the two players, with Tobin receiving $10,000 per year in 1939, while Lanning was being paid $4,500. If the money went the other way, the deal would have helped, but then there’s also the back-end of the deal. Lanning was released for nothing, while Tobin was sold for $15,000. The Braves made out well in the deal.

This trade was engineered by Frankie Frisch, who thought the Braves weren’t getting the full value out of Lanning due to a curveball that he (Frisch) considered to be one of the best in the game. Frisch was an announcer for Boston in 1939, then became the Pirates manager for the 1940 season. He saw Lanning a lot and wanted him. You could say that he had the right idea, Lanning would have been a solid pitcher to add, so you can credit him for half of the deal. He just didn’t gauge the other half of the deal correctly, and gave up too much. Checking what Tobin did against Boston in 1939 would be important to know for the decision-making process that went on back then. Then you check and see he allowed eight earned runs over 28 innings, for a 2.57 ERA. Sorry Frisch, that doesn’t help your case, but you’ll always have that Cooperstown plaque.

Anyway, that’s a long intro on Tobin (especially for a Card of the Day article), who would have been a bigger name in team history if he wasn’t traded. Today’s card came out earlier in the same year that he was traded. The 1939 Play Ball set isn’t great looking by any means, but it is popular due to the players included and the timing. There weren’t a lot of sets out at that time, and the paper drive during the war meant that there weren’t many sets produced overall between 1939 and 1947. If you want a card of Tobin on the Pirates, this should be your choice. Here’s a look at card #9 in the 1939 Play Ball set, featuring Pirates pitcher Jim Tobin. 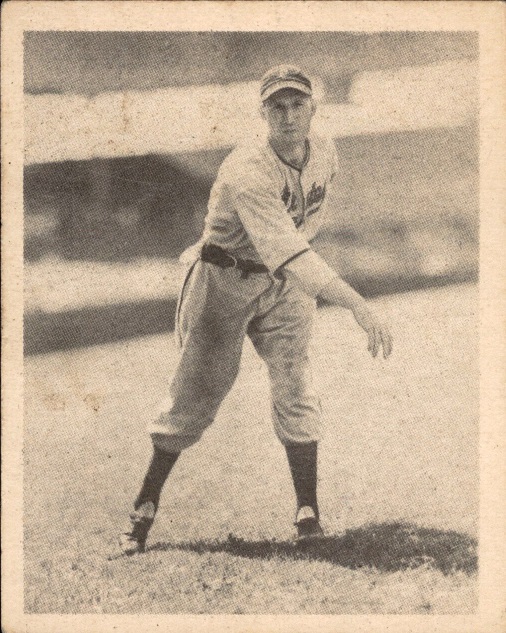 As I said, this isn’t a great looking set, but the timing/players make it more popular than it should be with that look. They did nothing for the front, just a white border around a photo. Not even a frame for the photo, separating it from the border. The photo quality here isn’t great either, and it’s a standard staged action photo. All of that, yet this is still a great card because Tobin shouldn’t be lost to team history, and it offers a cheap way to get a card of him on the Pirates. 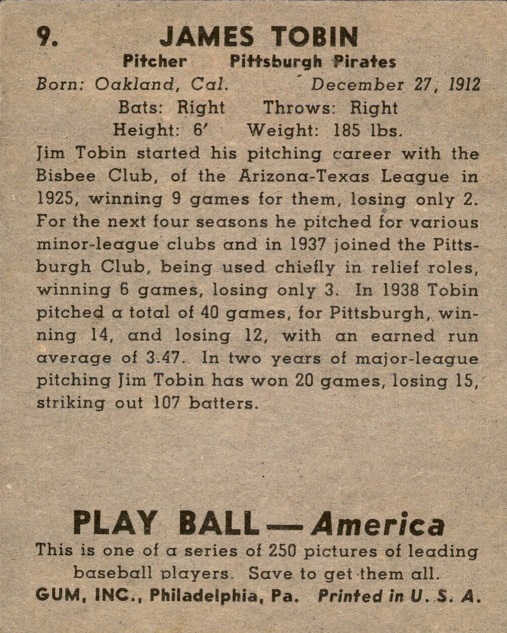 The backs are pretty detailed for a card that has zero bells and whistles on the front, just a black and white photo. I am by no means one of the greatest writers in American history, but the overuse of commas and sentence structures here just kill me. It’s good information presented poorly. I always write out numbers under 11, which they didn’t do four times here. I am not sure if what I do is “proper” writing and the other way isn’t accepted, but I know it looks better. The only time I write out higher numbers than ten is if it starts a sentence. What I’m saying is that I appreciate the stats, especially back then when they couldn’t just click on Baseball-Reference.com, but part of me really wants to edit that back to make it easier to read. I don’t feel bad about saying that either because I’m sure some of you have wanted to do the same for my writing over the years (now is a good time to remind you that guest articles are always appreciated).

If you’re interested in acquiring this card, hope on your Vespa and drive to your nearest Ebay, obeying all of the traffic safety laws along the way. You can add a Tobin to your collection for around $20 in decent mid-grade shape. Of course there are seller asking more money if you like to spend it, so you could get a PSA 6 for $210. There’s a PSA 2 for $20, which looks nice for the grade.