There have been plenty of worse players in baseball history, but few baseball players can claim to be well known for being bad. Let me start by saying that Mario Mendoza is in the Mexico Baseball Hall of Fame, and he is by no means known for his futility in his home country. I’ll also mention that the guy played 686 big league games, which easily puts him in the top half of all position players all-time.

I had to put that out there because the guy is known for his low average. He would practically be a star with his .215 career average in 2022, because players now go up there with an all or nothing caveman approach. He earned that .215 average with a lot of soft contact, and his anti-Wee Willie Keller approach of hitting it where they are (if you get that reference, we can be friends). The Mendoza Line is a .200 average because Mario Mendoza was always around a .200 average in his career. In nine seasons, he had five years under .200, though he hit .246 one year in which he received a lot of playing time, pushing his career average higher. That didn’t change the Mendoza Line because it was just one season compared to five under that .200 mark.

Today is the 72nd birthday of the Mexican baseball legend. I already used his 1978 Topps card in this series, so I had to go with another subpar offering from Topps. I always say that the 1978 Topps set is my least favorite of the 70s, but the 1979 set (and the 1977) isn’t far behind. This card is a perfect example of how bad that set can look. Here’s card #509 from the 1979 Topps set. 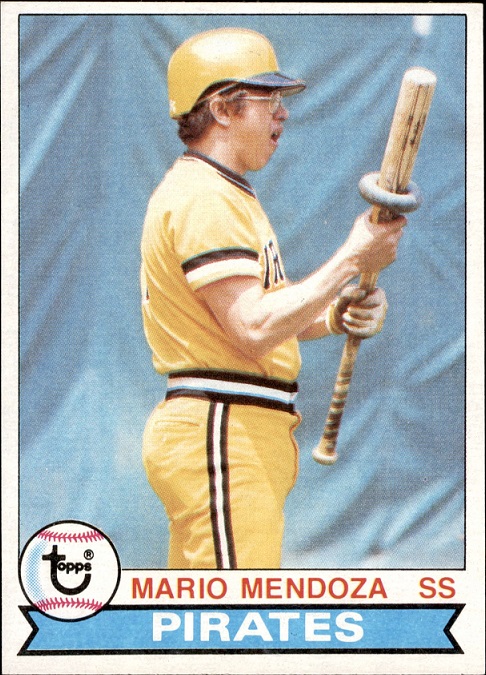 The 1979 Topps set does so many things wrong. They didn’t use team colors in the design. They didn’t go to plan B and use the team logo instead (which is perfectly acceptable and can be combined with plan A). They had a lot of awful quality photos (Exhibit A can be seen inches above). The front design is just plain bad. You can save a set with the latter of those four things. Case in point, the 1970 Topps set. Sure, the overall photo quality in that set is better, but they didn’t use team colors or include team logos and it’s still a great set. Mendoza is making a face on this card like he already saw the card and can’t believe they are putting it out.

Hey, the fronts of these cards might get just one star, but at least they save it with the backs, right? 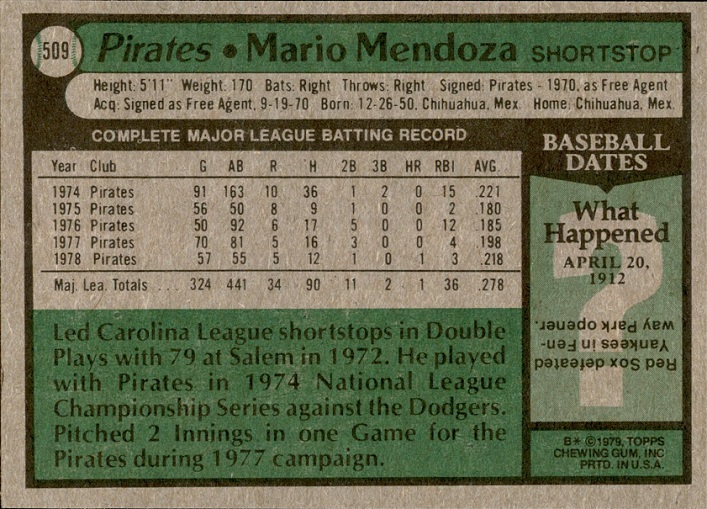 That would be a no, the back does not save this card. I hate the backs of these cards because of the dark color combos and gray background to make it worse. That question mark should be on the front as well because I question the thinking behind the front just as much. I do like one thing here, which is that last fun fact. I don’t think that I knew about his pitching performance, so why not expand a little. It came in the second game of a doubleheader on June 28th that the Pirates lost by ten runs. Mendoza allowed three of those runs, so in case you were wondering, the Mendoza line for ERA is a 13.50 mark. You don’t want to be worse than that point.

If you’re interested in this card, you can get it from multiple sellers for $2-$3 delivered. Don’t pay more. There are no graded copies, but there are two autographed copies and they are $24 each. A PSA 9 (no autograph) recently ended for $20, while someone paid $16 for a PSA 8.