Merry Christmas and happy holidays to all. You just had to know that today’s Card of the Day selection would carry the theme of the day. I don’t know if there’s a better name in Pittsburgh Pirates history for today. I might have to try to convince one of the top prospects on the current team to take up a ridiculous nickname that hopefully catches on, like Mike “Reindeer Crossing” Burrows, then I can feature him every Christmas in this series.

Today’s card selection comes from the 2017 Topps Chrome Update set. There was another card of Ngoepe on the Pirates that I wanted to use, but there was a second player on the card. I wanted to make this all about him, so I’ll have to save that card for another non gift-giving day. This particular set had 100 cards, with some variations included. It was released in November of 2017, right about the same exact time that the Pirates sold Ngoepe to the Toronto Blue Jays. Basically, this card almost didn’t happen. Here’s a look at card #48 from that set. 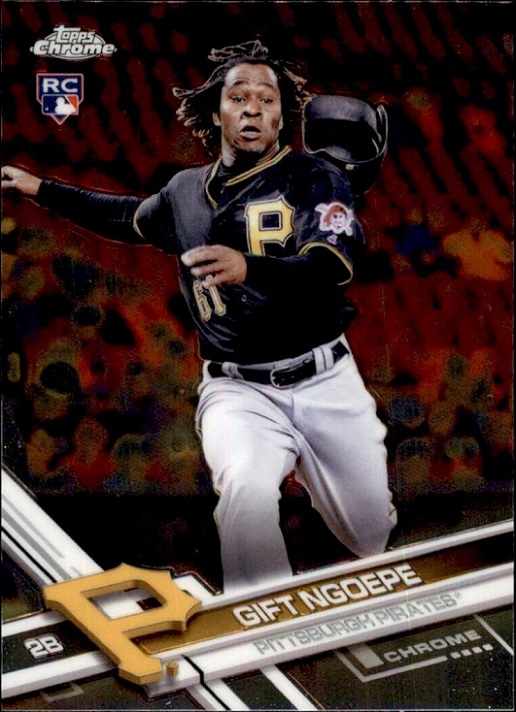 This is an interesting looking card. You get a great action shot of Ngoepe with the Pirates, which is pretty rare because he only played 28 games with the team and most of his action happened in his second game, which is referenced on the back. The fans in the background look like they’re part of an old painting, or possibly Simpsons characters bathed in a red light. Either way works for me.

I’ve mentioned too many times to count that I don’t particularly care for the current Pirates team logo. With today being Christmas, it’s best to say something nice about it. It’s not even forced either. I actually like the way they used the logo here with this front design. It almost looks like it pops off the card. I also like that rookie card logo that Topps started using somewhat recently. Check out Ngoepe’s sleeve. Why can’t that be the logo again? 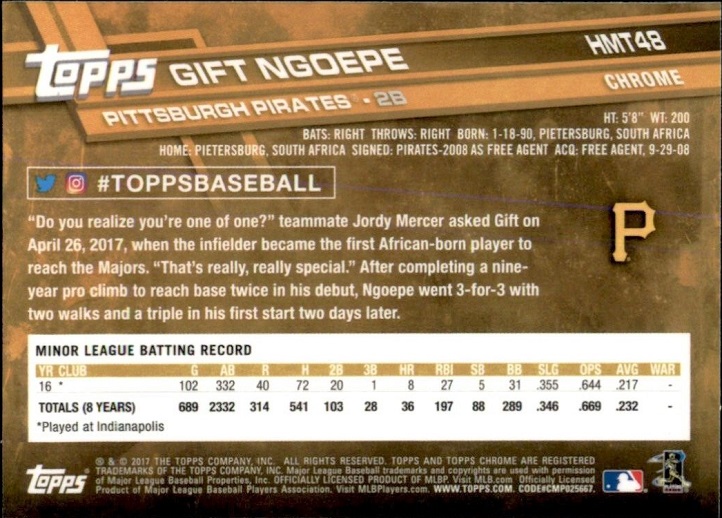 Despite being released in November, Topps still used stats from 2016 on the back, so it shows Ngoepe with no big league stats. The bio section has a nice little story about the significance of Ngoepe’s debut, and you also see the game I mentioned. He really struggled in his last 26 games after that big game, but he was always known more for his outstanding defense. He also had some speed, so he was a nice guy to have around as the last guy on the bench to use as a defensive replacement in the middle of the infield, and as a pinch-runner. Ngoepe came up at an interesting time. Just days earlier, Jordy Mercer was probably saying something similar to Dovydas Neverauskas, who became the first player in the majors from Lithuania. The Pirates had two “one of one” players on the team at the same time.

Many years from now, people will see cards from this set and have no idea what those symbols are, or why there’s a pound sign next to ToppsBaseball….or why Topps Baseball is one word.

If you’re interested in this card as a Christmas present for yourself, there are quite a few sellers who will have this card delivered to you for under $2. There are two other options on Ebay right now. One is a Refractor version, limited to 250 copies. There’s also an X-Fractor, which is numbered to 99. That latter is going for $12, while the other can be had for about $7 delivered.