Today’s Card of the Day features Frank Taveras, a speedy shortstop, who played on both the 1971 and 1979 World Series winning Pittsburgh Pirates teams. His role towards the 1971 title was as minimal as it could get as a September bench player. His 1979 role was much bigger, though it wasn’t something that he personally did on the field. The Pirates used Taveras early in the season to acquired shortstop Tim Foli, who went on to have his best season in the majors.

Taveras has been used in this series twice, but he has yet to be on a card by himself. His last appearances was way back on December 2, 2020, on a card that also featured Freddie Patek, a one-time Pirates player himself. His prior appearance came about ten weeks before that article and featured Taveras on a 1974 Topps Rookie Shortstops card that also had three other players.

Today’s card is from the 1977 Topps set. I’ve mentioned numerous times that I’m not a real fan of anything from 1977-1980 from Topps. For some reason though, this card doesn’t bother me as much as the set does in general. So let’s look at the tolerable card #538 from the 1977 Topps set, featuring Frank Taveras. 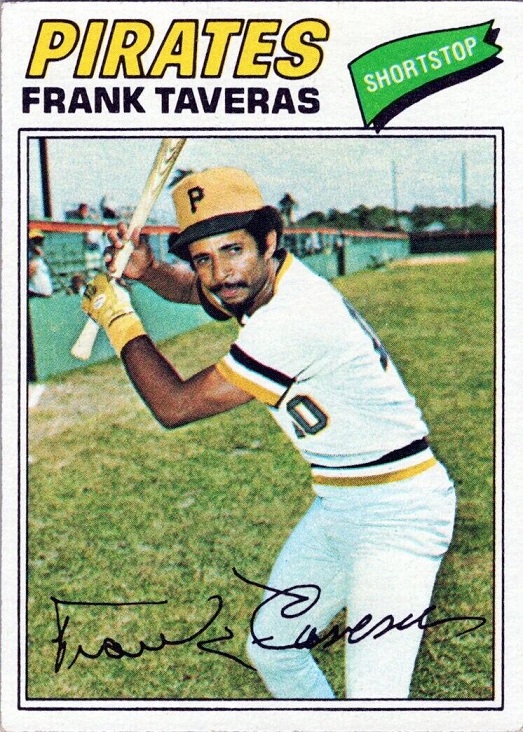 This set starts off great at the top for the Pirates, putting the team name in big yellow letters with a black outline. It’s downhill from there, as the player’s name is boring and the position pennant with shadow effect does nothing for me. Then that’s it as far as trying. White borders with a double frame around the photo and the inner frame is just plain white too.

What stands out about this set, but isn’t really prevalent here, is the poor photo quality. I like the look of the Taveras pose, though the way he grips the bat, you would be surprised if he hit more than two homers in his entire Major League career and one of those was probably an inside-the-park homer. This card is capped off with a facsimile signature.

I’ll note that Topps used this set as a throwback design not too long ago and the design works with better photo quality. Obviously the newer cards had a glossy coating as well to make them stand out more. 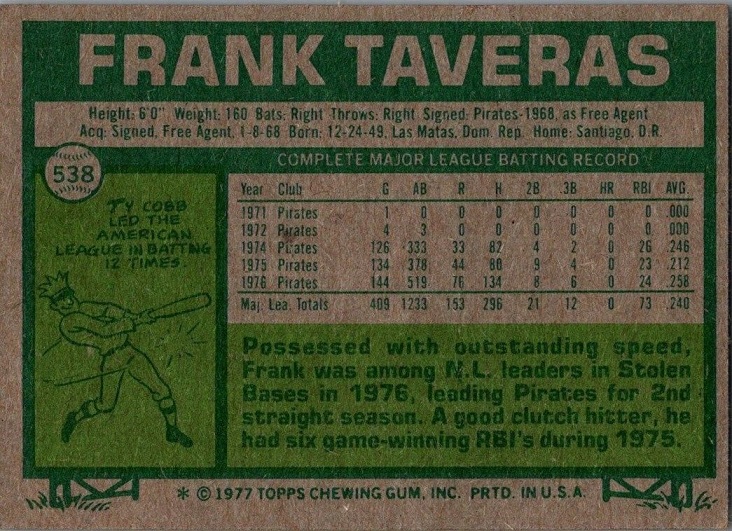 Name a worse back from any set? Don’t even attempt to read that stuff, I don’t want to seem like I’m in cahoots with the eye doctors and Topps. If you don’t own a 1977 Topps, just imagine trying to read that nonsense when it is much smaller in hand. It’s like they are trying to camouflage the writing.

Here’s a good question about the cartoon, and pardon the language please, but why the heck is Ty Cobb batting right-handed?

Here’s a fun fact about Ty Cobb that I’ve seen many people get wrong. If you see photos of Cobb at the plate, he is famous for having his hands in an exaggerated spread apart grip. I was told about this as a young kid, then I tried to swing like that and it’s as hard as it looks, yet somehow he was the best pure hitter in the game. What I learned later in life from reading is that he didn’t swing the bat like that. He did that to keep infielders guessing as to whether he would lay down a drag bunt or swing away, and when he did swing away, he slid his left hand down the bat and swung like everyone else in existence. If you learned something just now, pass it on to someone else and pretend you’re smart. I don’t need the credit, I’m not even giving credit to wherever I read it (I actually don’t remember).

Anyway, back to the Taveras card. These cards are all over Ebay and you should pay $2-$3 tops for one delivered. However, there are some options that stand out. There’s a PSA 9 for $40 delivered. There’s an autographed copy authenticated by PSA that is $39, with a best offer option. There’s a PSA 8 for $20, and an SGC 92 (8.5) that is only $13. There are a few autographed copies that aren’t authenticated, and they are going for $10-$15 each