Today is the birth date of one of the greatest pitchers in Pittsburgh Pirates History. If you made a dream five-man rotation, you’d have a lot of explaining to do if you left him off of that list. Sam Leever spent his entire 13-year career with the Pirates, compiling a 194-100, 2.47 record in 2,660.2 innings. He completed 241 of 299 starts, and he threw 39 shutouts. He had four 20-win seasons and an ERA title to his credit. More importantly, he helped the Pirates to four National League pennants, two World Series, and the first title in franchise history in 1909. Leever went 62-20 during those four pennant-winning seasons.

Despite putting up some big stats, Leever doesn’t have a ton of card options. That’s because a majority of his career came during a time when almost no baseball cards were being printed. Somewhat surprisingly, though it was possibly based on a financial reason, he did not appear in the iconic 1909-1911 T206 set, made famous by the seven-figure Honus Wagner card. Leever isn’t the only player not in the set, but he’s one of the biggest names missing from it.

Those lack of card options are one reason why I’ve spaced out Leever’s appearances in this series. His last featured card was a year ago today, when we looked at his T205 card, another very popular set from the era. His first appearance was two years ago today when we looked at his E91 card, which is not a popular set due to many generic/poor drawings. Today we are going with his E90 American Caramel card, which is probably close to the T205 set in popularity. They are in that second tier of vintage cards people collect. It’s a nice middle ground between the great artwork of the T205 set and the lackluster display put forward by the E91 creators. The E90 set is definitely in the middle and the Leever card in particular is one reason the artwork isn’t on par with some other sets. 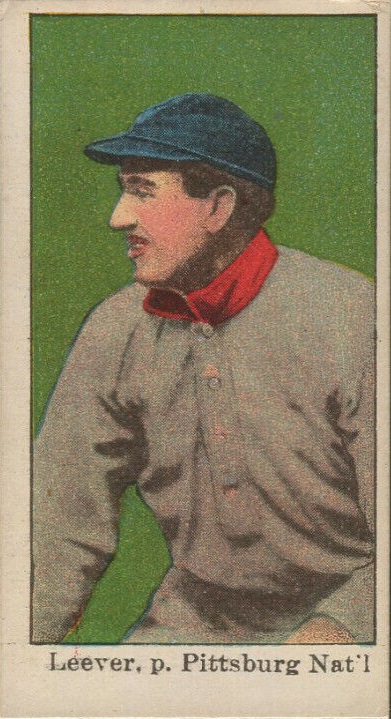 I have a feeling I would like this card a little more if it wasn’t for the red. I have no idea what’s going on with his lips here, but that’s something that is an issue with many cards in this set. The other red is that collar. No idea why they decided to make the Pirates collar red, but that wasn’t a thing. Some of the cards in this set have a background, but a lot are one solid color. I’m okay with that, though the great backgrounds in the T206 set is what really makes some of the cards stand out. They saved the solid backgrounds in that set for the portrait cards. Without the name at the bottom, there’s no way a majority of the people who know what Leever looks like, would say this is him. Check out the T205 link above to see a better representation of him.

BTW, The “Pittsburg” spelling is correct for the time. I don’t know why they felt the need to tell you this is a National League card, but that designation made a lot of sense back then. They had 16 teams between both leagues and Chicago, New York, Boston, St Louis and Philadelphia all had two teams. So more than half of the set needed those identifiers. 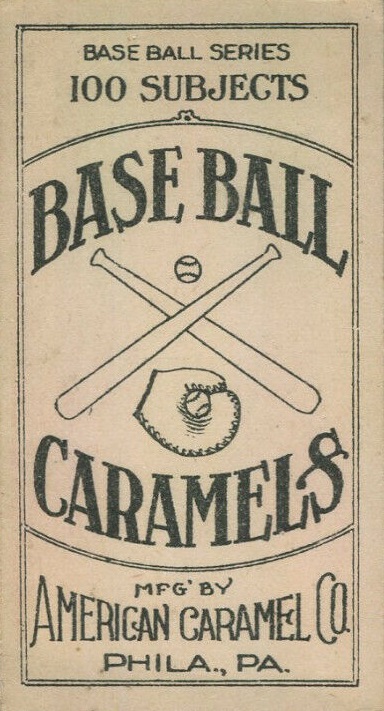 The back is a baseball themed ad for the American Caramel Company in Philadelphia, Pa. Notice that the top says that there are 100 subjects, but the set is actually bigger than that. There are 120 cards, which are the same size as T206 cards (much smaller than standard size cards today). One interesting thing you may not have noticed here is that baseball is two words. That was rather common back then, but it eventually morphed into one word for everyone. From knowing the 1909 Pirates, you know that they used it as one word. That’s the year that they had the iconic PBC patch on the sleeves (1908 as well), which stood for the Pittsburgh Baseball Club.

If you’re interested in this card, you only have one choice on Ebay right now. There has been one sold copy on Ebay in the last three months and that one looks like it’s been stored in a dog’s mouth since 1909. That was sold for $25 delivered. I wouldn’t expect to see another one that low, and honestly, you probably wouldn’t want one in that condition. The active auction is the scans you see above, and the seller is asking $300 for one that is graded PSA 3.5. That might not be a bad price, because other common cards in a similar grade have sold for more. Some have sold for less, and the prices are affected by the graded card population of each card.