This is the first appearance in this Card of the Day series for Glenn Wilson. He was a solid outfielder during the mid-1980s to early 90s, playing for five different teams over ten years. He spent parts of three seasons with the Pittsburgh Pirates, yet he didn’t even put in a full 162 games with the team. The Pirates acquired him during the 1988 season, traded him during the 1989 season, then brought him back in 1993, though most of that final year, which was also the final year of his career, was spent in the minors.

As someone who put in ten season in the majors and had a 13 career WAR, Wilson probably should have been featured here before. However, his patchy/brief time with the Pirates leaves him as a somewhat obscure player in team history. If he wasn’t part of two trades, he would probably be even more obscure in team history.

Since this is Wilson’s first time, I thought I would also feature a set for the first time. We have looked at the yawn-inducing 1989 Topps set here three times already. This is our first look at an off-beat set from 1989 Topps, called Topps Big. The name tells the story. Theses cards are bigger than your standard size, which made storing the cards a bit more difficult (awkwardly difficult might be better) than those standard cards. The cards take their look from the outstanding 1956 Topps set, though they used real photos instead of artwork. Here’s a look at Glenn Wilson, who is card #284 in the set. 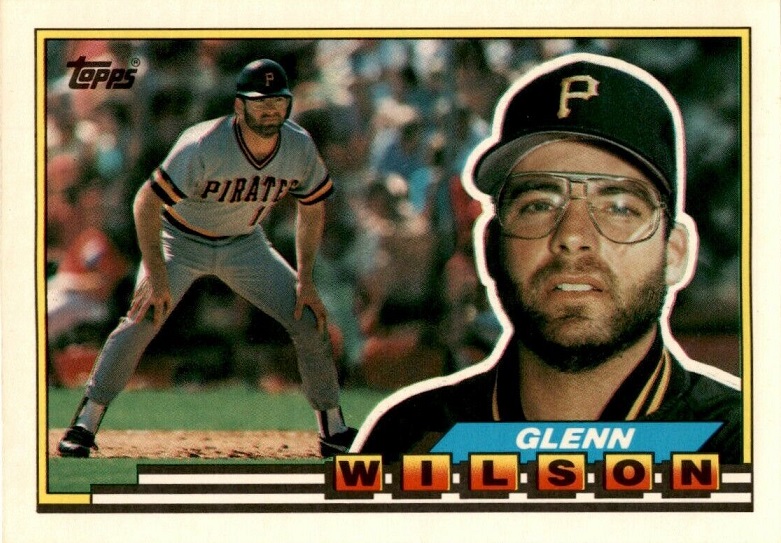 While the look isn’t exactly the same to the point you would call it a throwback set, the idea of using a bigger portrait style photo, along with an action shot background, is clearly from the 1956 Topps set. The horizontal layout is also an homage to that set. I’m a huge fan of the 1956 set, so I like the look of these cards as well. Topps gave it a bit more of a modern look with the name/front design, but it’s still a nice looking set. One thing that’s great with Wilson is that he didn’t have a ton of cards while with the Pirates, so getting two photos of him with the Pirates on the same card really makes this set stand out among his cards. 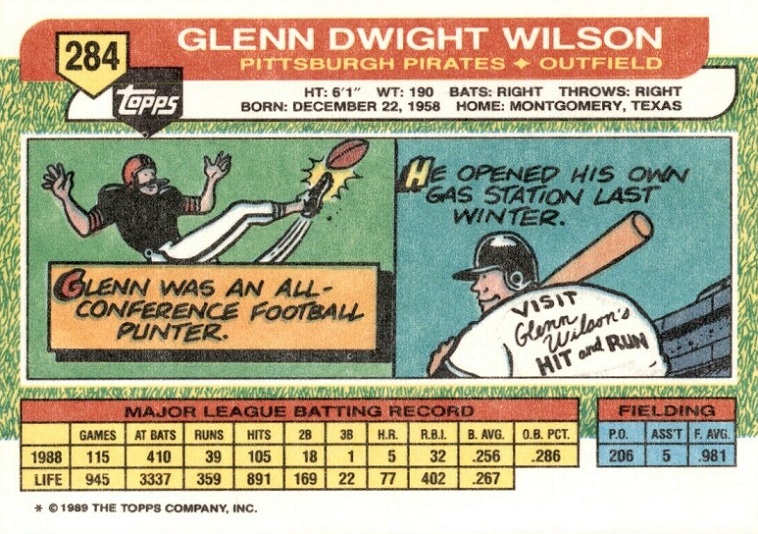 The back of this card is also a hat tip to the 1956 set. It’s just a bit more colorful, especially the grass background. It’s almost like the back of these cards were geared more towards younger kids. The 1956 Topps set had the cartoons for each player, using generic images that look like no one ever. They also used one year of stats and full career stats only on the back. It’s interesting here that they don’t have lifetime OBP for him, despite having the stat for the 1988 season. I looked it up to see if that was an error on his card, and it wasn’t. No one got the career OBP, which is odd since the stat can be figured out. Even if we pretend it wasn’t tracked before 1988, you can still calculate it.

These cards were not that popular due to the size, which led to them not catching on and Topps killing the idea after three years of lackluster sales and interest. They are not popular now either, so that keeps the prices of the best cards down. High production numbers don’t help the prices either if you’re a seller. However, if you’re a collector, then this set is great. Multiple sellers have this card for $2 or even less. That is great considering the cost of a stamp. You can also get the cards of Barry Bonds, Bobby Bonilla or Andy Van Slyke for that same exact price.