Andy Van Slyke is making his second appearance in our Card of the Day series on his 62nd birthday today. He’s significant enough in team history that he should have been here at least twice before today. However, he shares his two biggest dates in team history (on our site) with name players. Today’s title for our history article also notes that Freddy Sanchez was born on this date. So I get a toss up between those two each year, and I went with Van Slyke today. His other date is April 1st, due to the trade that brought him to the Pittsburgh Pirates. I could use Tony Pena or Mike LaValliere that day too.

Anyway, I thought I would not only feature Andy Van Slyke today, but I’d also use a set for the first time. We have featured the 1988 Fleer set here before, but this card is from a smaller set put out by Fleer called the Star Sticker set. It contained 132 cards and they were sold in packs of five cards, which also included a team logo sticker. This set has one major similarity to the 1988 Fleer set, but it also looks nothing like that set. Here’s card #116, featuring Pirates All-Star outfielder Andy Van Slyke. 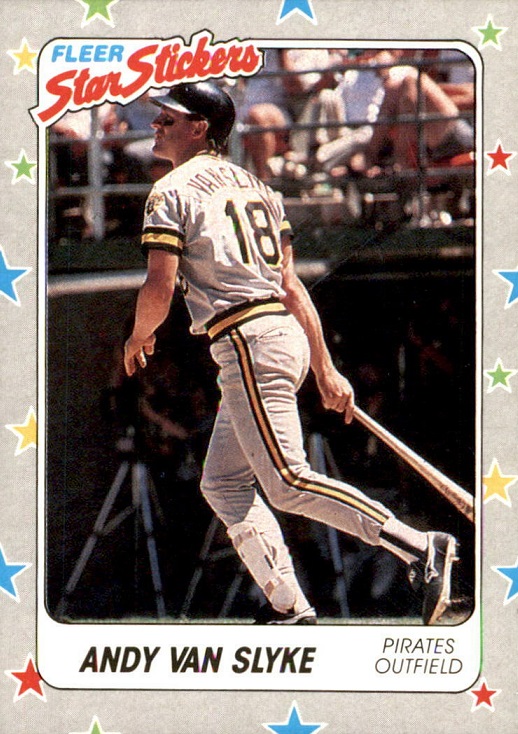 The regular 1988 Fleer set has white borders and they include a few sets of red and blue lines that go partially across the card. It’s a patriotic looking card. As you can see here, no white border, no stripes. It’s called the Star Sticker set and they used stars on the light gray border. Even the frame for the photo looks much different. The regular set had pictures that just faded into the border, with the player name just hanging out in the top border. They didn’t identify the team by name on those cards, but they included the logo, which should have been mandatory by 1988. As you can see above, what I just described sounds nothing like what you see. That’s a nice action shot of Van Slyke, no doubt hitting a homer, which I am basing on nothing. 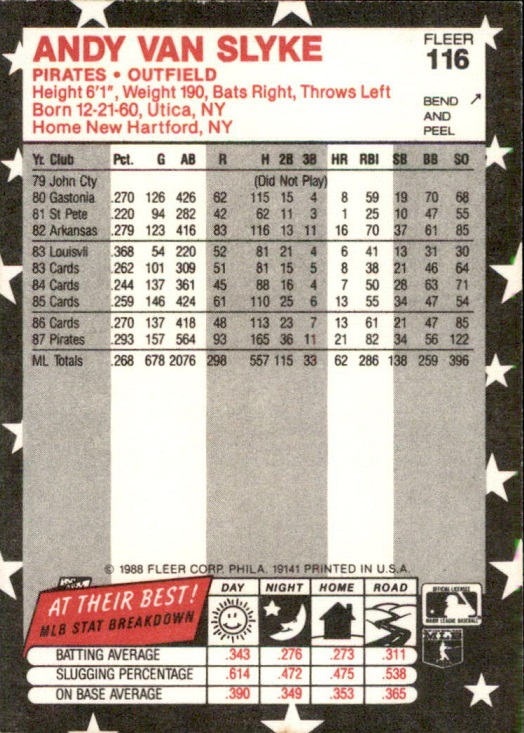 I mentioned that this card looks nothing like the 1988 Fleer set, yet they took something major from that set. The front of the card is the business end, and other than the shape of the card, it does not look like the 1988 Fleer set. However, you get to the back of the card and this is the same exact design of the back of a regular 1988 Fleer set, with one major difference. Fleer used two shades of blue on the back. A grayish blue is just gray here, while the black is a darker blue on the original cards. As you may have guessed already, the stars aren’t on the regular cards either. The setup of the stats and the added stats at the bottom, as well as the way that the top part is set up, is all the same as the regular Fleer set.

One other major difference can be seen in the top right corner. You won’t find “bend and peel” on regular cards. I’d guess that by 1988, these cards weren’t getting peeled apart too often. Cards started really getting value by 1987, which can be considered the start of the card boom in my mind. There are definitely more 1987 cards out there than 1986 for every set. Since value became a real thing that collectors all followed around this time, I imagine that fewer stickers were getting peeled. Trust me, no one would be buying this card without the sticker, so it immediately became worthless once it was peeled. Of course some people bought them to peel, so they didn’t care about value, but I’m willing to bet that a very large majority of these cards that were produced, stayed intact.

If you’re interested in getting this card, it’s both cheap and there are plenty of choices in that low price range. The only auction of note is an autographed copy for $17. Otherwise, don’t pay more than $2 delivered for this card. Resist the temptation of paying a high shipping fee for a $1 card.