Today’s Card of the Day choice comes from a five-player trade between the Pittsburgh Pirates and New York Yankees, which occurred  on this date in 1984. The names in the deal make it significant, but three of the players were nearing the end of their careers, while another was long gone from his new team before he became significant. We have featured Tim Foli and Dale Berra here multiple times, and Jay Buhner doesn’t have any Pirates cards.

I wanted to feature the fifth player here, pitcher Al Pulido, but he only has one card showing him on the Pirates, and no one had a back scan for that card on Ebay. My second choice was Steve Kemp, because he has not been in this Card of the Day series yet. That changes today with a very interesting offering from the 1985 O-Pee-Chee set. By the time I got a Steve Kemp card of my own, his career was already over, but I got some cards that were a few years older and I remember him on his 1986 Topps card with the Pirates. That’s the card I planned to use until I saw the 1985 O-Pee-Chee card and switched gears. The crazy Canadian cousin of Topps decided that this card I’m about to show you, was a good idea for Kemp. 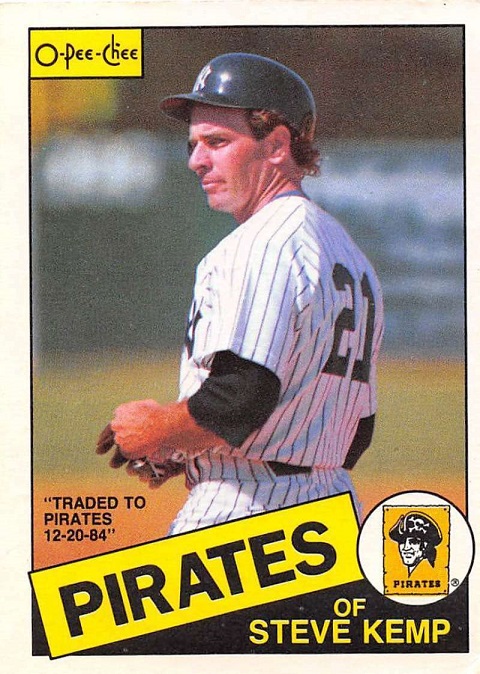 We have mentioned here numerous times that Topps had a plan in place for any time they didn’t have a photo for a player with his new team. They took photos of players with no caps, then cropped them close to the shoulders so no team name/logo would show. That picture would work for any team he joined. In later years, Topps decided to do airbrushing, and they did a lot of awful work with it too.

O-Pee-Chee didn’t like either of those ideas and went with what you see here. They had a photo of Kemp on the Yankees and they used it. You got a problem with that? They noted that he was “traded to Pirates 12-20-84”, which was 38 years ago today. Then they went with everything Pirates for the rest of the card. Notice how the Pirates logos and colors even make the Yankees uniforms look better. Is there any question that the Pirates have the best looking uniforms? They definitely had the best logo during this time period.

The timing of the trade made it impossible for Topps to have players on their new teams. They had cards out right around Christmas. However, O-Pee-Chee came out later, but not late enough to get new photos, so they had just enough time to do something strange like this card. 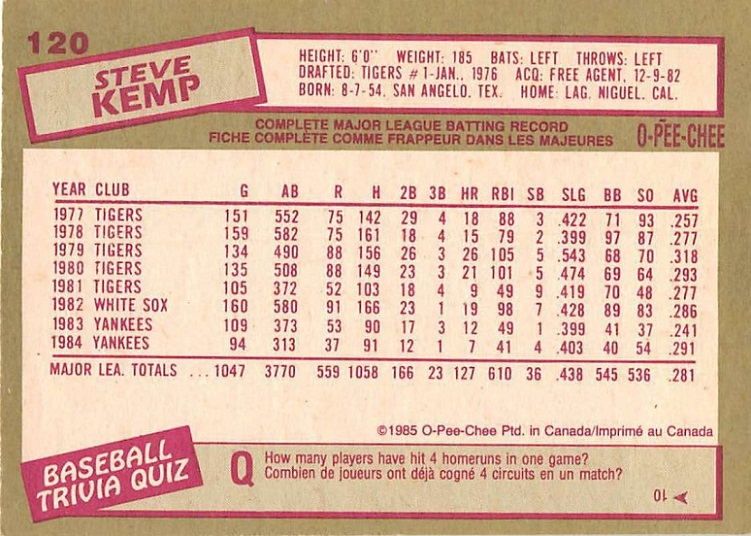 Obviously the O-Pee-Chee logo gives away the front of this card as not being Topps. The back of the O-Pee-Chee card has a few more differences. Writing in a different language in the main indicator, but the back color is also a bit different. The Topps card has a darker background, making it a bit harder to read. O-Pee-Chee didn’t have a devil handshake deal with eye doctors apparently, so they made the cards easier to read. You also get the O-Pee-Chee name twice on the back, once in the small print.

One thing to notice with the stats here is that Kemp was drafted in 1976, then look at that rookie season in the majors in 1977. That’s pretty impressive. His career quickly fizzled out. He had 18.0 WAR by age 27, then finished with a career total of 19.5 WAR six years later.

O-Pee-Chee cards for commons usually run about the same price as Topps. They are harder to find, but fewer people collect them as well. There are only 12 examples of this card on Ebay right now, and you can get one delivered for about $2. There are no auctions that stand out, such as autographs or graded, so just check the shipping charges before purchasing.