Today’s date isn’t a busy one for the Pittsburgh Pirates. The players born on this date don’t have a lot of options for cards showing them on the Pirates. This is the second appearance for Jose Silva, pitcher for the 1997-2001 Pirates. His first was more of a comical appearance due to the photo on his 1999 Fleer Tradition card. That card didn’t have a great photo of Silva in the sense of you would recognize him from the photo. That card is all about his glove and where it ended up. Today’s card is a good look at Silva, which I owed him by this point in our Card of the Day series.

The 2001 Topps set has some chase cards that I mentioned in the first two articles I wrote about this set. I decided to use one of those chase cards as our featured card today. So let’s get right into the card, which is #613 in the set, and it’s the Home Team Advantage variation for Jose Silva. 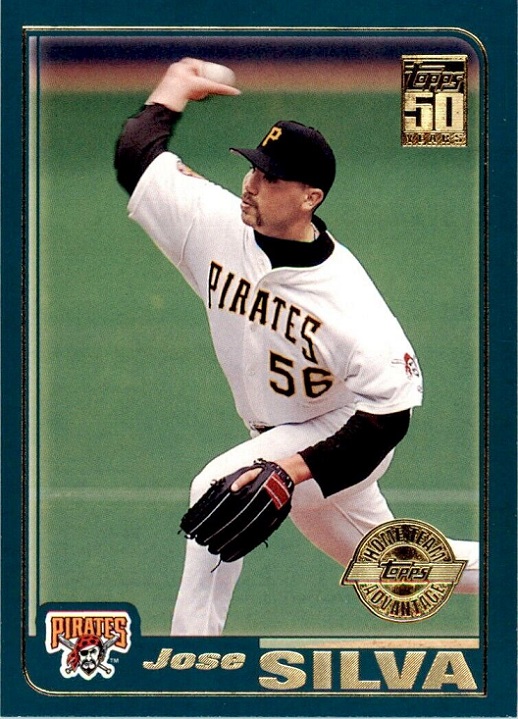 I liked what Topps did in 2001 with the front design. It’s a good look that strays from the white borders and borderless cards that were popular during this time. The border color actually has a few variations, which I will mention in the pricing section below. Team logos on the front of cards should be mandatory, at least for the Pirates. Don’t really care what the other teams do.

I assume you clicked the link above from his previous Card of the Day appearance, so you can see that this card represents Silva better than the first (doesn’t make it a better card though). The chase part of this card might be hard to read, but the gold foil stamp in the bottom right of the photo says “Home Team Advantage” with “Topps” in the middle of that special logo. It’s a bit interesting that they put Topps in the logo, because they already identified themselves on the front, so who else would it be? 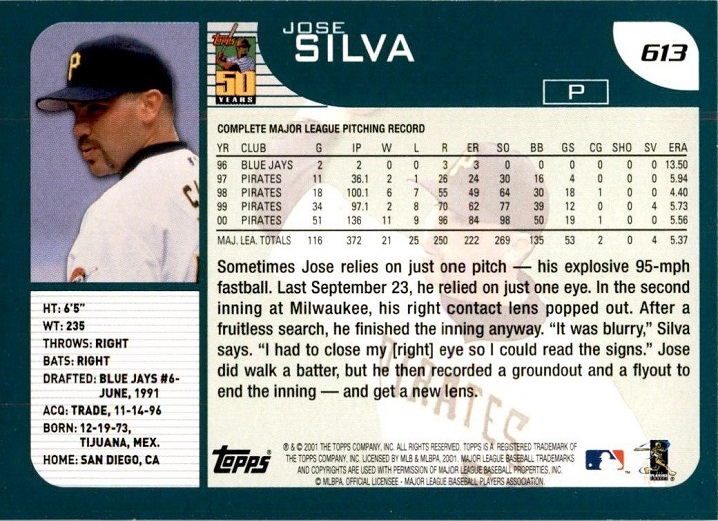 You get a second look at Silva on the back, and it’s a photo that was probably taken the same day. You may have missed it, but the background for the stats actually has a faded image of the front of the card. It’s one of those things you might not notice right away, but then you can’t unsee it. A look at the back here shows that the only difference between this card and the base card in the set is that special foil logo on front.

The bio section is interesting. It notes that Silva relied on his fastball. A 95 MPH fastball is impressive, but we see that number all of the time now, as pitchers have lower pitch counts and can air it out on every throw. There’s more to it than that. I’m sure his 95 then is harder than 95 now because the pitches are measured at different points. His pitch would probably be more like 97-98 now, yet it’s the same exact pitch. The contact lens story is interesting. Not sure if I would have included it over including minor league stats, but Silva bounced around a lot, so minor league stats would add another nine lines to his numbers.

If you’re interested in this card or any of his 2001 Topps cards, you have options, including autographed versions. Someone is selling an employee copy numbered to 150, and that’s the most expensive at $10.50. The auto is $9 delivered. Then there’s the base, gold border (numbered to 2,001), Home Team Advantage and Limited Edition. They can all be had around $2-$4 delivered. One person has a Chrome version and that is $2 delivered. Happy collecting!