This is our first look at a Donruss product put out in 1997. This is our second look at Joe Randa, who doesn’t have a huge amount of Pittsburgh Pirates cards available, despite spending two seasons with the Pirates. Randa was a member of the Freak Show team in 1997, which competed for the division title until late in the season. He returned in 2006 for his final season in the majors.

It’s a bit lucky that Randa ended up in this set. These cards were put out in November/December of 1997, and he was selected in the Expansion Draft by the Arizona Diamondbacks on November 18, 1997. By the time people were getting these cards, he was already a member of the Detroit Tigers, who acquired him immediately from Arizona after the draft. For a signed card that was put out 25 years ago, these cards are extremely easy to find. That’s because Donruss had 3,900 of them signed, plus 1,000 of another card, which we will cover in the pricing section below. For now, here is card #81 from the 1997 Donruss Signature Series set. 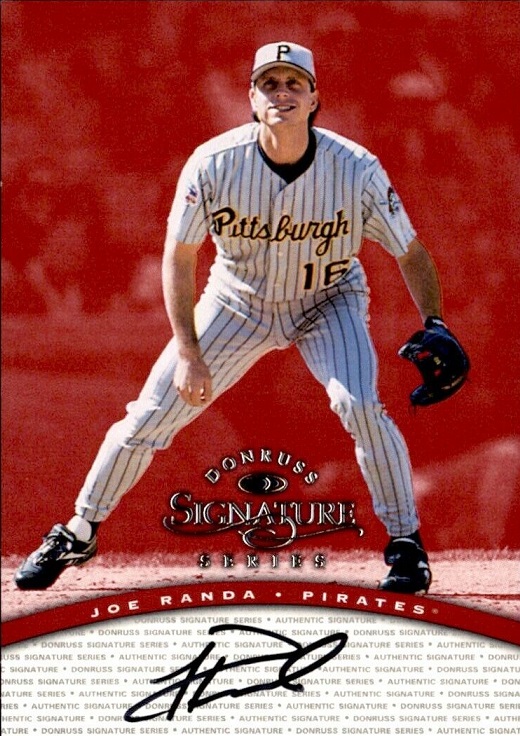 Who can forget those pinstripe light gray uniforms from that era. I was/am not a fan of this uniform, but I did like the hat, and I still have one on a Pirates hat rack that my dad made many years ago. I bought that hat and a few other old (unused) Pirates hats off of Ebay some time around 2002. There is one good thing about the uniform and that’s the team logo on the left sleeve. I like the look of “Pittsburgh” too, so I guess there are two things, and I don’t mind the color, so I guess three things…okay, it’s the pinstripes I don’t like. I’m not even a fan of the 1979 pinstripes really, but those can look better when the tops are paired with the black pants.

These cards have an interesting look with the tinted out background (they’re not all red). Randa does not have the best autograph, though it does well by 2022 standards. He’s not really consistent with his autographs either. There are just small differences when you see scans side-by-side, especially with the loop on the “R” and the way he ends the autograph, but they all basically look like what you see above. 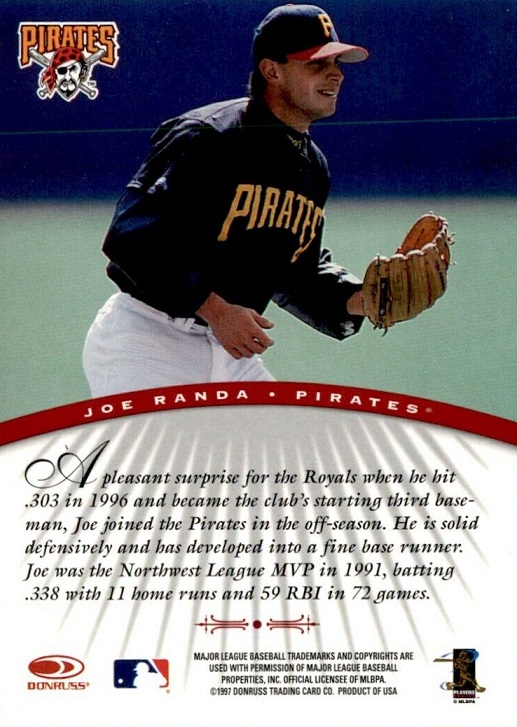 I was going to describe one of the other old hats I bought around 2002, but there it is on Randa. I am not as big of a fan of that hat, but it’s there for show. You would think with the Pirates having red in some of their best uniforms from the 1930s, I’d be okay with that in the team colors, but I never liked it back during this Randa era. I like that Donruss gave us a second completely different look of Randa on the back. I hate when the front/back photos are the same or taken the same day seconds apart. Donruss also gets bonus points for the Pirates logo.

Knowing already that Randa left around the same time the first people were getting this card, it’s funny that they made a passing mention of him joining the Pirates in the off-season. Hey Donruss, he also left them in that current off-season.

There are plenty of these cards on Ebay and you can get them delivered for around $5-$6 each from multiple sellers. Of course other sellers have them for more if you want to throw money away, but I’d suggest the lower prices. They also made a copy that has green tint for the background on front instead of red. Those are numbered/signed to 1,000 copies. Somewhat surprisingly, those aren’t any more expensive, though they are hard to find, as you would expect. I’m guessing there isn’t a huge market for these cards where 1,000 would get soaked up by the market, running up the price of any that get listed.