Wynne played outfield for the 1983-85 Pittsburgh Pirates. He wasn’t with the team for a long time, but he was around during the right time to get many choices for a Card of the Day article. He will be here again, probably a year from today, because I have a favorite Pirates card of Wynne. I was going to use that card today until I realized that the 1984 Fleer base set hasn’t been featured here yet. There’s really not much of a difference between this set and the Update set, but that’s still a major oversight on my part. The 1984 Fleer set was quite popular for a time due to the Don Mattingly rookie. When he was at his peak, his card prices were very high. They didn’t print as many Fleer cards as they did Topps that year, so his Fleer card had some extra value (not like the Donruss type of extra value), which drove the price of the set.

Here’s our second look at Marvell Wynne, featured here on card #269 in the 1984 Fleer set. This is considered to be one of his rookie cards. 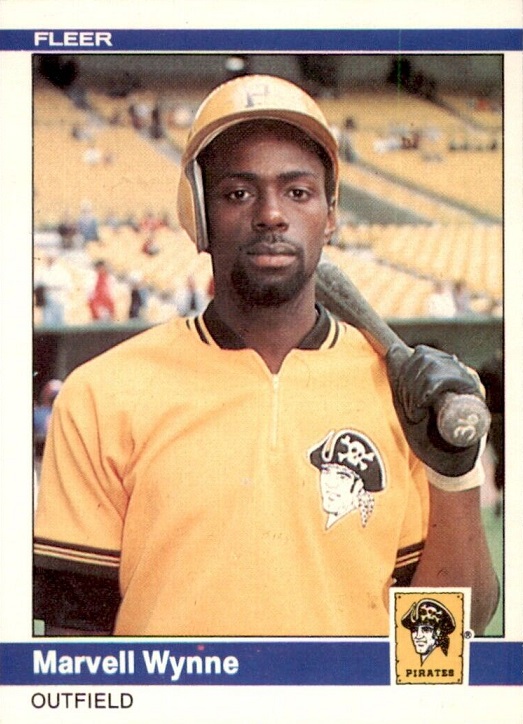 I really like those gold batting helmets. I told this story once before, but I had one of those for a time as a little kid. I don’t think the Pirates still used them at the time, but I could be wrong on that fact. I love that old logo from that era, and it’s great that you get a double look at it with the jersey and the card logo. However, I am not a fan of that much gold, so I doubt I would ever wear that batting practice pullover. Now if a player used one was for sale for a decent price, I might grab one, but I wouldn’t be wearing that.

The 1984 Fleer design is rather simple, but adding the team logos in the bottom corner really adds to the look. Without that, it would be an extremely boring design. I believe this photo was taken in Olympic Stadium, home of the Montreal Expos at the time. The 36 on the bat is the jersey number for Wynne, his only number he wore with the Pirates, but then he never wore it again with any of his other teams. 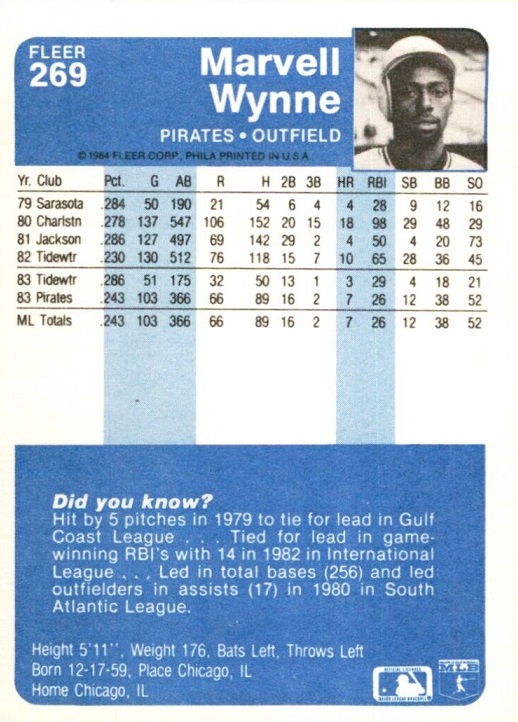 I love that Fleer added second photos on the back, as that wasn’t something that was popular to do. You can find very few sets over the years that did this before Fleer started doing it in 1983. This one is a bit funny though. It was as if the photographer asked him if he can open his mouth a tiny tiny bit so he can get a second photo. The back here included all of his stats as a pro, which is always appreciated. The “Did you know?” section makes mention of game-winning RBIs, which was an actual stat you could find almost anywhere for a time. It was said that the stat got dropped because players were using it in negotiations for new contracts, though it could probably work against them as well.

If you’re interested in this card, it is plentiful on Ebay. There are 44 results and no special auctions, surprisingly not a single autographed copy, so just don’t pay over $2 for one delivered to you. There are a lot of auctions under $2 total cost.