Today’s Card of the Day subject is a first-time player in this series. R C Stevens played for the 1958-60 Pirates, putting in a total of 71 games over his three seasons, with most of that time coming during his rookie season. He’s one of the more obscure members of a Pittsburgh Pirates championship team. Today’s Card of the Day is his 1958 Topps card, which is his rookie card. He’s showing up here for the first time today because the Pirates traded him to the expansion Washington Senators on this date in 1960. He was part of a three-for-one deal to acquire pitcher Bobby Shantz (check our daily history article to see the odd details of this deal).

When I decided to use Stevens today, I went to Ebay to see if he had more than the two card options that I knew about already. I got some results in my search that were Steven Brault cards, due to two common things done in Ebay searches. I wrote in “RC Stevens Pirates”. I got Brault showing up because Stevens/Steven show up for the one spelling, plus “RC” is a common baseball card abbreviation for rookie cards. The “R C” for the 1958-60 Pirates player doesn’t stand for anything. That’s his actual full name, nine letters long: R C Stevens. When I first learned that RC didn’t stand for anything, I wondered if “C” was his middle name, or if it was all just one first name. 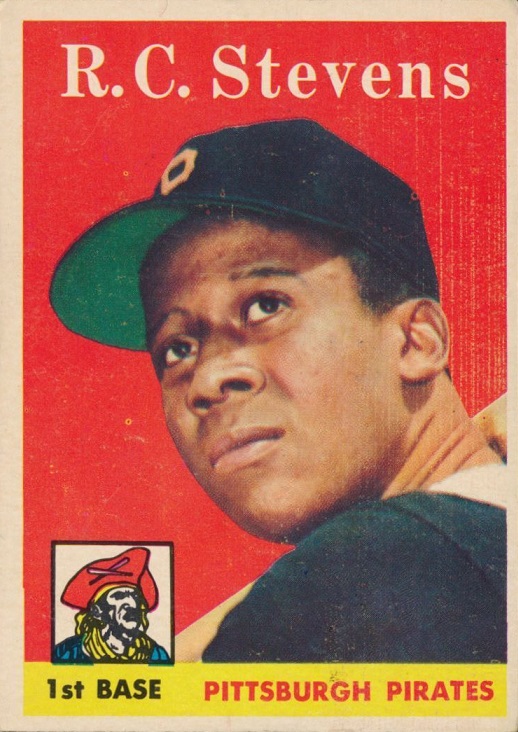 First thing I noticed with this card was the great old Pirates logo. I will always mention that one when I see it on an old card. They need to bring something like that back. I’m tired of the boring current logo. The other thing I noticed has to do with his name. Since R & C don’t stand for anything, then there shouldn’t be periods after his name. I shouldn’t complain about that though. If you search his name on this site, you will find it “RC”, “R.C.” and “R C”

The other option for Stevens is a 1959 Topps card. I don’t particularly like one set more than the other, both the 1958 and 1959 sets are mid-range for me, so I really did just choose this one because it was his rookie card and it went well with the Brault story. The two Stevens cards have somewhat similar poses, except this one is much more of a closeup than the other. I’d probably like this set a little more if it had a regular background instead of the solid one-color look. 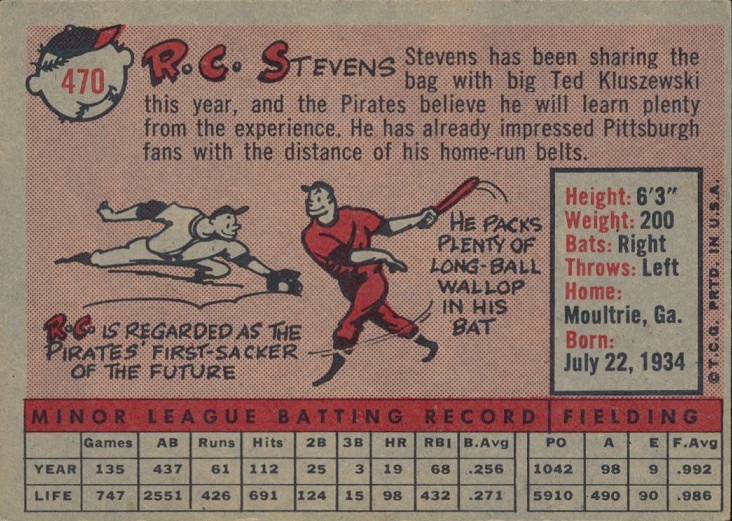 One thing you can’t tell from the front of this card is that Stevens was a big dude. In fact, the back doesn’t even give you the best feel for his size. A guy listed at 6’3″, 200 is definitely bigger than average, but Stevens is listed most places as being 6’5″, 219 pounds. That’s a pretty big size difference. As the bio mentions and the cartoon/stats show, he hit for some real power.

The wording on the back also let’s you know that this card wasn’t produced until the middle of the 1958 season. That’s something you could have also deduced from the high number of this card in the set. I don’t know the exact date of the printing, but notice where it says that he “is regarded at the Pirates first-sacker of the future”. Stevens started one game total for the Pirates after June 29, 1958. That includes his games during the 1959 and 1960 seasons. That one game was the Pirates final game of the 1958 season.

One thing I always have to mention with this set. I like the old look when sets put the card number in a baseball, but this set is just strange. What is that baseball supposed to be? It reminds me of a werewolf/vampire kid with a baseball hat.