Today is the anniversary of an important trade in Pittsburgh Pirates history. They acquired pitcher Vic Willis in exchange for three players in a deal that worked out great for the Pirates. Willis average 302 innings per year and he won 21+ games during all four of his seasons with the Pirates. His final season was 1909, which ended with the team’s first World Series title. Even without the title, the Pirates would have won the deal, but the championship adds a second level of success with this deal, especially since Willis was a large part of getting them there.

Today’s Card of the Day features Willis in a full Pirates uniform, and it even mentions the team name on the front. However, this card was printed a full year after the Pirates sold him to the St Louis Cardinals, and that’s also noted on the card. The T3 set is truly one of the best looking baseball card sets out there, and the Willis card is just one example of what makes the set so great. We looked at this set once before for Howie Camnitz. Here’s a look at the 1911 T3 card of Hall of Fame pitcher Vic Willis. 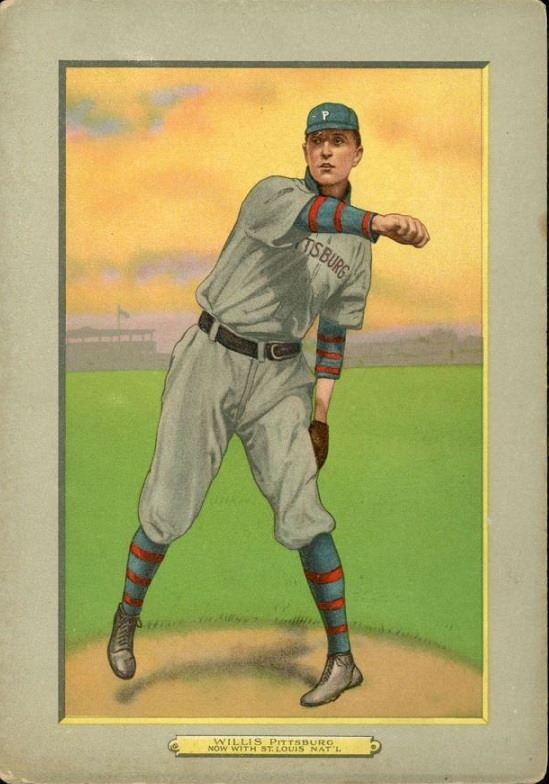 You can’t tell from a scan by itself, but these cards are much bigger than your average standard baseball card. Not only that, but these cards are based off of T206 cards and/or designs, and those cards are much smaller than standard card sizes now. So basically, a card from the iconic T206 set would fit well in the bottom corner of one of these T3 cards. The actual size of the T3 card measures 5-3/4” x 8”. They are printed on a thick cardboard, which has allowed most of them to stay in great condition compared to most cards from that era.

That’s a 1909 Pirates uniform, though “Pittsburg” was not written across the chest back then. Even in 1911, the spelling of the town name without the H at the end was correct. If you notice the bottom nameplate, it says “Willis Pittsburg: Now With St Louis Nat’l”. Willis was sold to St Louis on February 15, 1910 and he actually announced his retirement at the end of the 1910 season, so not only is he in a 1911 set with a different team, he was already out of baseball at the time. 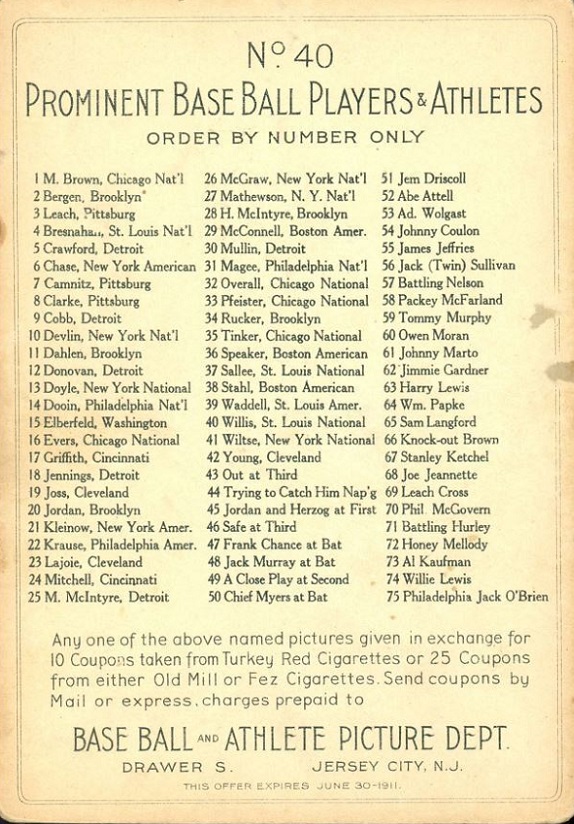 There are three different backs for this set and this is my favorite one. One of the others looks a lot like the checklist section of this back without all of the other writing. The third back is just an ad for Turkey Red, which was a type of cigarette back then. The first fifty cards on the back here are baseball cards. Some of the other 25 names might be familiar to you if you’re a boxing history buff. They issued a card #76 of Jack Johnson (look him up if you don’t know) and that card is more popular than most of the baseball cards.

A total of 16 of the first 42 cards (the individual player/non-combo cards) are Hall of Fame players. If the clueless Hall of Fame voters ever rightfully put in Bill Dahlen (a New York shortstop with more WAR than Derek Jeter), then his prices will reach Hall of Fame levels. His cards are already expensive though because smart people realize he’s eventually getting into the HOF, but this waiting part for him is getting tedious. Vic Willis waited 85 years after he retired to get to Cooperstown, and had to enjoy the sky view of the ceremonies. Dahlen last played 111 years ago, so he has no sympathy.

I should have said this at the start before hooking you on one of these cards. They are expensive. There are five examples of this card on Ebay right now and they range from $460 to $2,860. The low priced one is out of Canada and it is in rough shape, including writing on the back. I only have one example from this set and it’s not a Hall of Famer, though it is a Pirates player.