We have only covered the 1953 Bowman set here once. That was back in November 2021 when we featured Bob Friend on his date of birth. Bowman put out two sets in 1953. The Friend card came from the color set, featuring photos in full color. The other set was smaller and not as popular, and it had black & white photos.

One of those Black & White cards depicts Paul LaPalme, pitcher for the 1951-54 Pittsburgh Pirates. He has not been in our Card of the Day series yet, so this articles serves as two firsts. Let’s take our first look at the 1953 Bowman Black & White set, with card #19, featuring Paul LaPalme. 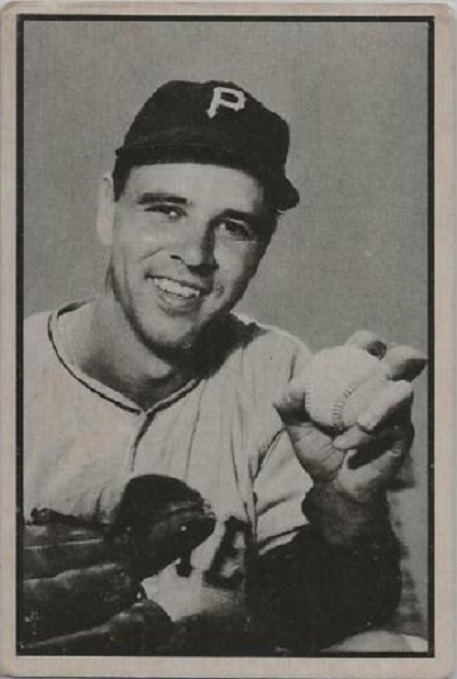 There’s a good reason why 1953 Bowman cards aren’t featured here more often. You’re looking at it. Even the color version is just this card with a color photo. Their meeting for the set design took about 15 seconds. White border? check. Black box around the photo? check. Meeting adjourned. Nothing on the front. No team, no position, no name, no set logo. While this set design is awful and boring, it is one you have seen on other sets. The company TCMA put out sets in the 1970s that used this same design, and it was said that the people in change really loved the straight forward design of this set, letting the photos themselves take center stages and the backs do the rest of the work.

Now that you see this card, you can imagine why this set was not popular back then. The funny thing about sets not being popular when it is new, is that years later the limited quantity makes them more expensive. No one wanted to pay more them back then. People will pay extra for them now. There were only 64 cards in this set, and only five made the Hall of Fame, making this an affordable set that you can buy whole or collect one-by-one. For reference, these cards measure 2 ½” by 3¾”.

I like the photo here of LaPalme, who you would assume threw a palm ball, but you can tell by the grip there that he threw a knuckleball. 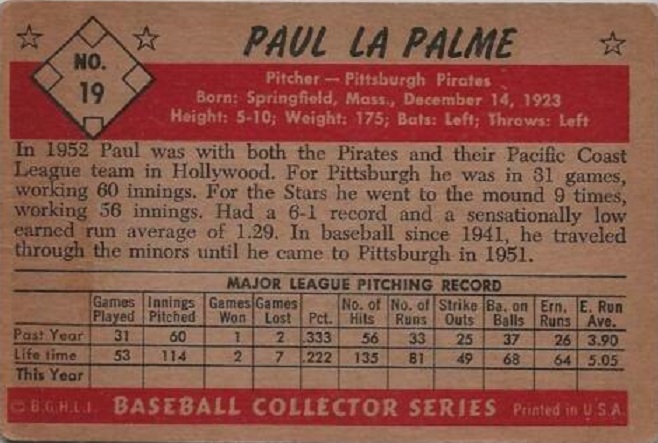 I like the back of these cards. You got a nice design, a decent bio section for every player and then 1952 stats, followed by career stats. They did something else that is unthinkable now. The empty line of stats called “this year” isn’t a mistake here. That was for people to enter stats after the season was over! Are you kidding me? They were encouraging people to write in stats, and some people actually did it. You can find these cards with stats written, which is important to check for if you’re buying a raw copy of one of these cards. Not only should you check for writing, but check for erasure marks as well. Those are just as bad and they will affect the value of the card.

Keeping in mind that I didn’t check every auction for writing on the back, here’s a look at the current prices of this card on Ebay. A PSA 7 of this card is $275, but that’s a high price. A PSA 6.5 can be had for $125, while a PSA 5 (from the same seller as the PSA 7) is going for $100. An autograph copy that is authenticated, is $60. While LaPalme had a long time to sign these cards, he passed away 12 years ago, so his autographs aren’t getting any easier to find. Another authenticated one is $44, though the card itself is in bad shape. LaPalme had a really nice autograph, much nicer and cleaner than you will find from a modern player. If you just want a regular collector grade copy of this card, no grading or autographs necessary, you should pay about $15. Please check the backs for writing/erasures before buying any cards from this set.