In a Card of the Day article from 11 days ago, I mentioned that Pittsburgh Pirates infielder Andre Rodgers lost a recognition when MLB reclassified the Negro Leagues as Major League Baseball in December of 2020. For 57 years, Rodgers was recognized as the first player from the Bahamas to make the majors. He lost that honor to Ormond Sampson, an OF/IF for four seasons between 1932 and 1941 in the Negro Leagues for four different teams.

Rodgers wasn’t the only “first player” to lose an honor. Today’s Card of the Day features Joe Christopher, who was recognized for 61 years as the first player from the Virgin Islands to make the majors. That honor now belongs to Alphonso Gerard, who played Negro League ball during the 1945-48 season. The same thing happened for other countries as well, but Christopher and Rodgers both played for the Pirates, so their stories are relevant here. Both players are still recognized as the first National League players obviously. Hiram Bithorn, who is revered in Puerto Rico, was a member of the Pirates during an off-season/Spring Training, but he never played for the Pirates. He went from first in the majors to 11th with the new league added.

This is Christopher’s first appearance here and we may see him only one other time. He has a 1980 TCMA card that celebrated the 1960 Pirates World Series winning team. His 1961 Topps card is his rookie card and his only card with the Pirates from his playing days. Here’s a look at that card, which is card #82 in the set. 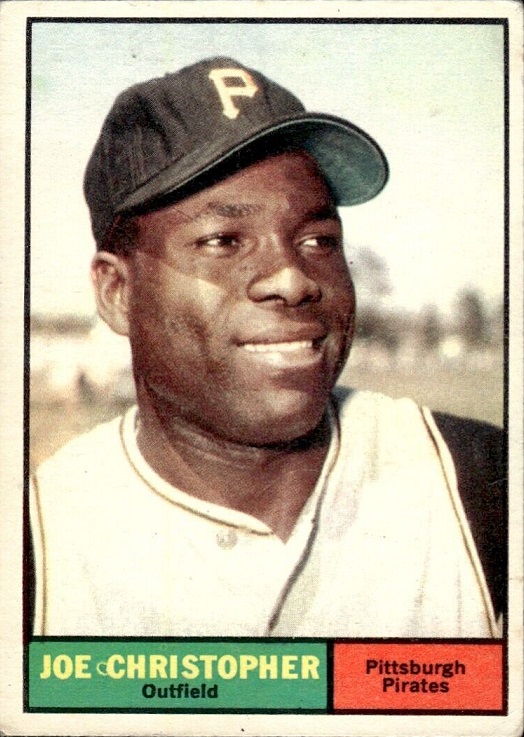 Whenever a player has just one card on a team, you always have to watch for that player actually being pictured with another team. Christopher debuted in the majors with the Pirates, so you get a great shot here of him in a Pirates hat, and that’s clearly a Pirates jersey. He got that Topps photography trick treatment on his 1966 card with the Boston Red Sox, which actually shows him in a New York Mets jersey. The trick was crop the photo close to the shoulders and get him without a hat. Topps didn’t include him in the 1962 set, so by the time he ended up in the 1963 set for his second card, they already had a photo of him with the Mets.

We don’t cover the 1961 Topps set here much because it’s rather bland. They didn’t use much of a design and the colors didn’t match up to the teams. They changed up the colors a bit throughout, and there was no real pattern. For example, the Clemente card in the set has red letters for his name in a yellow box, and the Pirates part is yellow letters in a green box. Other players on the Pirates have that combo, others have the same as Christopher, while others have variations of those colors, some with white lettering for the name instead. 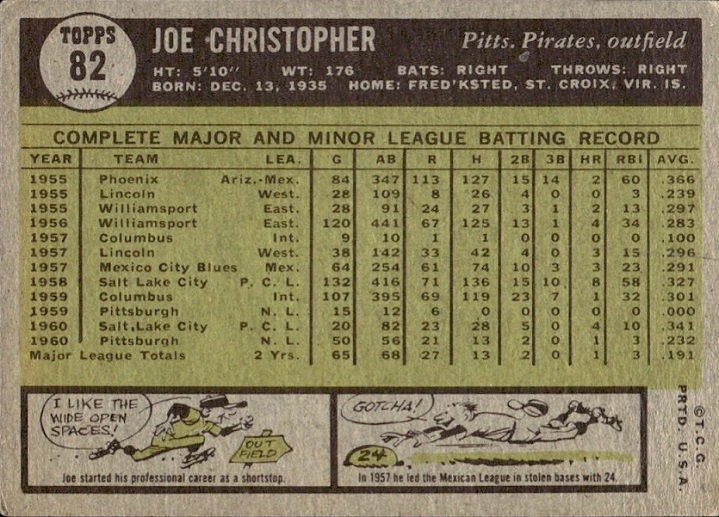 I actually used the back of this card to help with Christopher’s bio today in our daily history article. In case I didn’t mention, he turns 87 years old today! His online stats have a few clear major errors from his time with Lincoln in 1955, so that’s actually how I landed on this card to use as today’s subject. You gotta love when Topps includes all of the player’s pro stats. Generic Gray Topps Man plays the part of Christopher here as a young kid and an older man, though it appears that they are talking about things that happened two years apart…

If you’re interested in this card, it can be had cheap. You probably want to be in the $5 delivered range for a nice ungraded one, but it can be had cheaper. A signed graded copy with an amazing looking signature is for sale for $100. A PSA 8 is $80, but there’s another for $55, and another for $20. That’s quite a range for the same condition. An ungraded signed card is $52, but you can also get that much cheaper. It pays to shop around.