Today’s Card of the Day features the second greatest shortstop in baseball history, who just happens to be the second greatest shortstop in Pittsburgh Pirates history. On this date in 1941, the Pirates traded away 29-year-old All-Star Arky Vaughan in a deal that seems ridiculous to think about today, but it actually had some merit back in the day. That didn’t make the trade better, it was still one of the 5-10 worst in team history, but it did give an explanation that makes sense as to why they would make the deal in the first place.

When the Pirates traded Vaughan after the 1941 season, they received four mediocre players in return. Those four players combined for 0.1 WAR in 1941 for the Brooklyn Dodgers. None of them were young players with upside either. Vaughan missed some time due to injury in 1941, but still had 4.8 WAR in 106 games. That was his lowest WAR since nine years earlier as a rookie. So how do explain that away? Basically getting four middle aged (in baseball terms) replacement level type players for a superstar makes no sense.

It was a bad trade at the time and ended up bad long-term as well, though it could have been worse if Vaughan didn’t retire for a wartime job for three years. The Pirates still lost the deal badly, but it could have been much worse. The reason they made the deal is that they were worried about losing players to the war draft, so they wanted to make sure they had big league players who they thought wouldn’t be drafted. They got an infielder, outfielder, pitcher and catcher, so you can at least give them some credit for filling potential holes. You have to remember that this trade was made five days after Pearl Harbor, so there was a bit of a panic from baseball teams not knowing what they would have going into 1942. You would at least hope that they wouldn’t have made that same trade without the war/draft factor.

Anyway, this is a Card of the Day article, as we bring back Arky Vaughan 81 years after the Pirates sent him away. Today’s card has been alluded to in the past. As you will see in the description below, there’s a reason I sort of mentioned this card while talking about his 1939 Play Ball card. Here’s a look at the 1936 S&S Game card of Arky Vaughan. 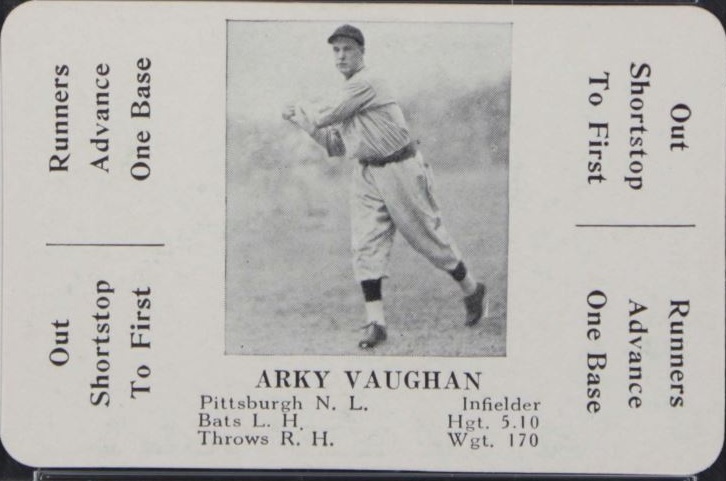 You might be able to deduce from the look/shape of this card that it wasn’t your typical card. The “Game” part of the title is telling you that it was from a game that used cards like a deck of 52 playing cards. The 1936 S&S Game set also had 52 cards. Seeing the back scan will make that deck of cards aspect easier to see, so let’s get that out of the way, then go back to the front. 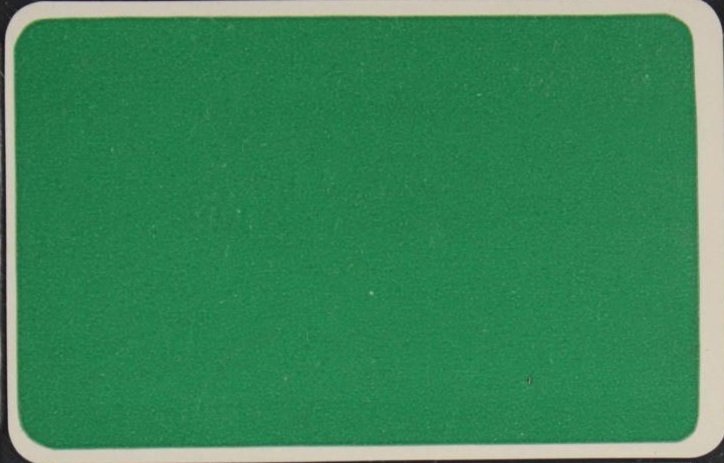 Well that back is as boring as you can get, but it is a no doubt sign that this is from a deck of cards.

Getting back to the front now, you can check out that picture. It’s the same one used on his 1939 Play Ball card linked above. That card is from a much more popular set, but it came out three years after the S&S Game was released, so clearly they were using an old photo.

As you can see by the game outcomes, it was actually a baseball game you could play with your friends. The cards came with a board game called The National Game, which is much tougher to find now than the cards themselves.

While these cards still hold value, older cards shaped like a deck of cards tend to lack popularity among vintage card collectors. It fits more in an oddball category because it’s not a standard card. Part of the reason for this set being lower price has to do with the smaller player photo and the players almost being secondary to the game itself.  The other reason is that those naturally rounded corners held up better than square cards, so playing cards can be found in much better shape. The higher grade cards don’t stand out, so the competition for them doesn’t really exist, and the lack of lower grade cards takes away the budget collectors. The pricing section will be explain that part.

This card has seven examples currently on Ebay and five of them are graded PSA 9. They range in price from $99 to $320, with that top price being twice as high as it should be. For comparison, a PSA 9 of the 1939 Play Ball is currently for sale for $5,775. The older card using the same photo. That tells you all you need to know about the popularity. If you want a PSA 9 of an Arky Vaughan card, this is the way to go.