Today’s Card of the Day features Eddie O’Brien, twin brother of Johnny O’Brien, who was his teammate with the Pittsburgh Pirates during the 1953 and 1955-58 seasons. They were born on this date in 1930. I already used the perfect card for this date exactly two years ago. The 1954 Topps set included a card of both brothers on the same card.

I wanted to do something today for them, and thought about making this a double feature from the 1956 Topps set, but they have a limited amount of available cards. To save some for future articles, I went with the 1956 card that I think has the better action pose in the background. Both of them are nice, but I like the Eddie O’Brien card a little more. The 1956 Topps set is one of my all-time favorites from Topps, ranking up there with 1962, 1981 and 1987. Eddie O’Brien is card #116 in the set. Here’s a look at that card. 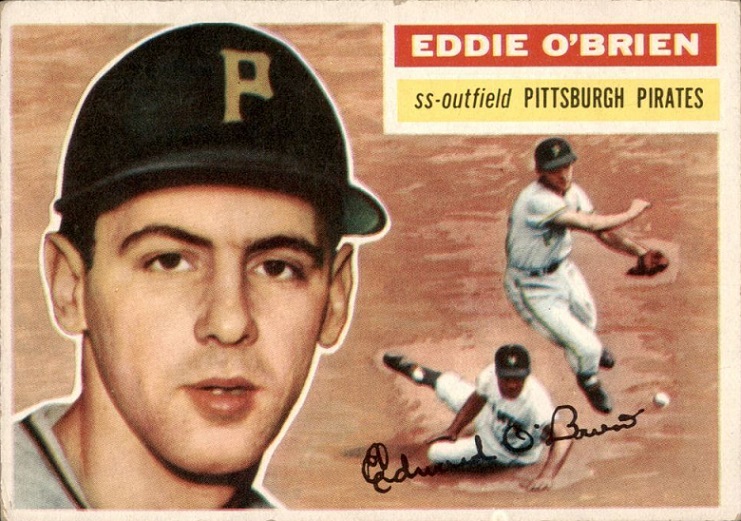 Despite not mentioning it up top, I really like the 1955 Topps set. I am a big fan of horizontal layouts of cards, which could possibly be due to the fact that they are different than the normal layout. It could also be due to the fact that something like this card is possible with a horizontal card. You couldn’t have that action background and a photo of O’Brien on the same card designed with the normal vertical layout. I think I would have really liked the 1955 set when it came out if I was around back then. That also leads me to believe that I would have loved these cards. Topps copied their 1955 idea, and then made the entire background a baseball scene instead of a one-color background. They came up with a great idea and then improved on it immediately.

One interesting note on this card is the position listing. O’Brien played a lot of shortstop in 1953, but when he returned from military service in 1955, he played a total of 15 innings at shortstop. He was a center fielder that season, yet they list shortstop first and outfielder second. For those who don’t know, the O’Brien twins both were two-way players, taking turns on the mound. Eddie O’Brien didn’t pitch his first game until 1956. His 1957 Topps card has pitcher listed as one of his positions. 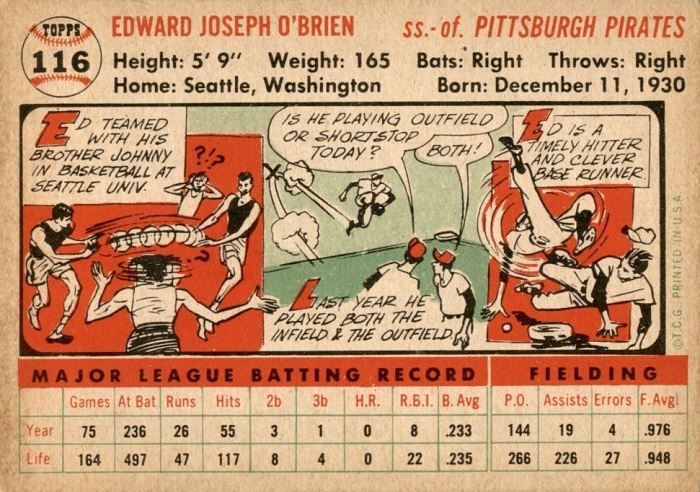 The 1956 Topps backs were colorful with Christmas colored cartoons. The set had two different color backs, gray and white. This is the white back, though it’s clearly an off-white color. The first 180 cards in the set all came with white or gray backs, and then the final 160 cards had just gray backs. It gets a little tricky after that because the first 100 cards are easier to find with white backs, while cards 101-180 are easier to find with gray backs. That would make this particular scan an example of the tougher back. Johnny O’Brien is card #65 in the 1956 set, so he’s the opposite as far as the backs availability compared to his brother.

One other noteworthy thing here is the fielding stats being included. That position split on the front actually makes that fielding percentage a little misleading. A .976 fielding percentage for a shortstop isn’t bad, but it’s not the best look for an outfielder.

If you’re interested in picking up one of these cards, I assume the front is the selling point and the white/gray back doesn’t matter unless you are collecting the set. The highest priced one on Ebay right now is a BVG 8.5 for $290, with a best offer option. For $100 less (plus a best offer option as well), you can get a PSA 8. However, those prices are outliers, because another PSA 8 is $82 delivered, a 7.5 can be had for $64 (with a best offer option) and a PSA 7 is $38. You can get this card for around $4 delivered in decent shape, but a few bucks more will get you a nice ungraded copy. These cards are plentiful because they are popular, and dealers are constantly turning over stock from this set.