Today’s Card of the Day is one that I have mentioned multiple times as a future article subject. Today is the future. On the 83rd birthday of Pittsburgh Pirates pitcher Bob Priddy, who played for the team in 1962 and 1964, we take a look at his rookie card. He shares this card with another pitcher from the era, Tom Butters.

This is the lesser known of two Pirates Rookie Stars cards from the 1964 Topps set. The other one depicts Orlando McFarlane with long-time shortstop Gene Alley. We took a look at that card almost two years ago. That article has the first mention of today’s card subject. Recently we looked at the Topps Heritage card from 2013, which uses this same design and includes Bryan Morris and Justin Wilson. That article also references today’s card. That’s quite the buildup for two pitchers who saw minimal time with the Pirates, but here we go with our look at card #74 from the 1964 Topps set, featuring pitchers Bob Priddy and Tom Butters. 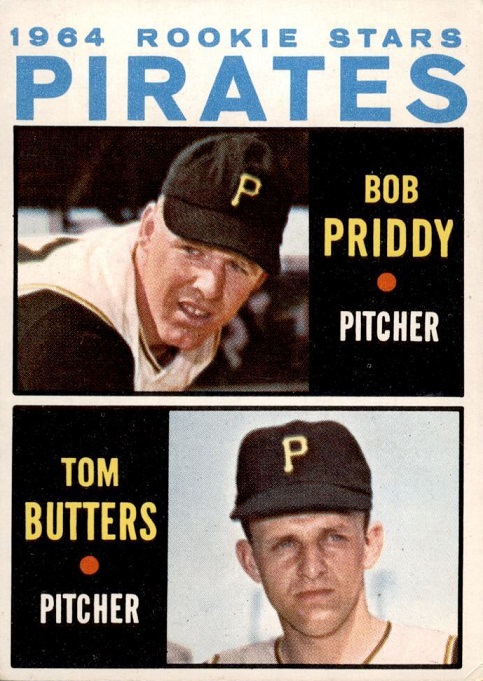 Assuming you checked either of the links above, then this design for the Rookie Stars subset of the 1964 Topps set looks very familiar. What I particularly like about this card and the Alley/McFarlane card is that Topps used the team colors in the design. That’s not something that they did throughout the 1964 Topps set. That’s specific to the subset for Rookie Stars cards. Here they used a black box for the name/position, along with the yellow/gold writing for the player names. There’s a reason why that color combo looks great, so when you see it in the design and both players’ uniforms, it really makes this card stand out.

Both of these pitchers spent minimal time with the Pirates before these cards came out. Priddy is an interesting choice because his time came in 1962, then he spent the entire 1963 season in the minors, and didn’t really do anything spectacular. Butters pitched a total of 22.1 innings before this card was produced, though that was split up between the 1962 and 1963 seasons. He was slightly older than Priddy, but he also had a much more impressive 1963 season in the minors. You could see why he would be a focus of one of these cards. As it turned out, Priddy had the better career. He put in nine seasons in the majors. Butters played his final game in 1965. Being a baseball history fan, Priddy is the more famous person to me, but Butters made a name for himself after baseball while serving for a long time as the Athletics Director at Duke University. 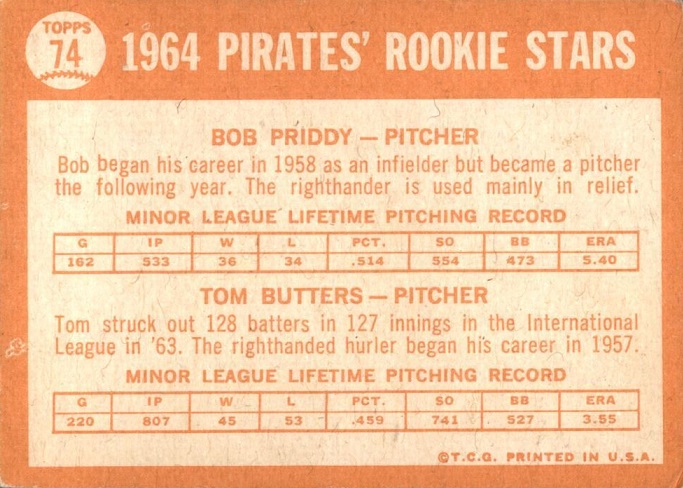 As you can see from the brief bit of info on both players, Butters certainly seemed like the more interesting prospect, but both took some time to get to the majors. What they don’t tell you is that Butters was 16 months older, which can make a difference when comparing prospects at the same point in their career. There’s a big difference in those ERA numbers, and that strikeout total mentioned for Butters was quite impressive for that era.

If you’re interested in this card, Ebay has about 65 active auctions, and only four sold copies in the last three months, so this card isn’t flying off of the shelves. That’s good for the collector, as you can get it from multiple sellers for $3 or less delivered. A few people have the card signed by both players, and those go for around $40 each. Neither player is a difficult autograph to find, but since Butters passed away not too long ago, it’s not something you can replicate anymore. A PSA 7 of this card is for sale for $28 delivered, and a PSA 6 can be had for $25. However, another seller has a PSA 7 for $20 with a best offer option, so I don’t need to tell you which of those three makes the most sense. Priddy has signed quite a few of these cards, and they can be had for $10-$15.