Today’s Card of the Day is our second look at the 1976 Crane Disc set. The first one featured Al Oliver back in October of 2021. There were 70 discs in the set, and they came with different back ads, which I will highlight in the pricing section at the bottom. Today’s player of the day is here for the first time.

Doc Medich spent one season with the Pittsburgh Pirates and it was memorable for the wrong reason, through very little fault of his own. The Pirates wanted to add a starting pitcher for their run at a pennant and Medich had some solid stats with the New York Yankees, while also putting in a lot of innings. If the Pirates got the type of production they hoped from this deal, then it still would have ended up bad. That’s because they included Willie Randolph in the trade.

It was a strange decision at the time because there were plenty of reports that said the Pirates were getting a lot of interest in Randolph. His price should have been very high considering he was just 21 years old at the time, and he already had 30 games of big league experience. That took away some of the prospect risk, since he didn’t sink in his first big league trial. There also wasn’t free agency as we know it until after this deal was made, so there was still a possibility that they were just giving up his entire career. Randolph finished that career with 65.9 WAR, which basically makes him a Hall of Famer, even though that honor hasn’t been bestowed upon him. He has the same career WAR as Duke Snider and early 20th century pitcher Ed Walsh, and I’ve never heard anyone question their Hall of Fame case.

Medich ended up playing one season (1976) for the Pirates and it was worth 0.9 WAR. He wasn’t the workhorse pitcher they thought they were getting, but he wasn’t awful either. The problem was that the Pirates also gave up pitchers Dock Ellis and Ken Brett. Ellis had 1.3 WAR in 1976, Brett had 4.2 WAR. If the deal was Ellis for Medich even up, it would have been an even value deal. That wouldn’t have happened, as Medich clearly had more value at the time of the deal, but anything else the Pirates threw in to make that deal happen would have swung the deal in favor of the Yankees anyway. Unfortunately, that throw-in ended up being a HOF-caliber second baseman who was 21 years old.

A hidden loss in this deal is the difference between Brett and Medich as hitters. Brett was one of the best hitting pitchers and Medich, who didn’t bat with the 1973-75 Yankees, was one of the worst. There were times where Brett wasn’t the worst hitter in the lineup, so the Pirates lost some offensive value too.

You can’t hold the trade portion of this deal against Medich. He had a 3.51 ERA in 179.1 innings that year. You would love that type of production from a pitcher now, though those numbers were a far cry from his stats with the Yankees. Anyway, we can take a look at one of his cards without dwelling on the 47-year-old trade that rates as one of the two worst in team history with the Kiki Cuyler deal. So today we look at this interesting offering from Medich’s only season with the Pirates. 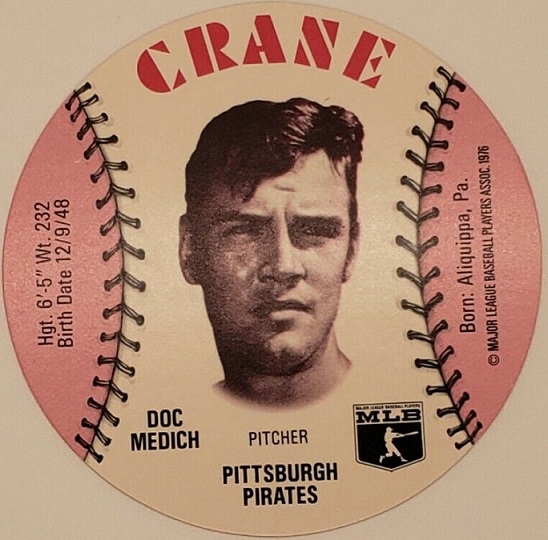 You can see that this is a “card” in name only. It’s just easier to classify any collectibles like this as cards so they are easier to find/catalog. I think the word “oddball” is the best description I’ve seen for non-standard cards. These have a round shape instead of square/rectangle, and as you can see by the seams, the idea was to make it look like a flat baseball. The picture of the players ended up in the sweet spot of the baseball (sweet spot is an autograph term for that part of the ball). The left and right side here are pink, but that color changed throughout the set. There were multiple variations of the colors pink, blue, purple, green, yellow and orange. It’s like a more subtle version of the 1975 Topps set idea.

Most of the players are shown wearing hats in this set. You would assume that the reason Medich doesn’t have one is because he was traded to the Pirates in December of 1975, and with this being a 1976 set, they didn’t have a photo of him with the Pirates. However, they didn’t have a contract with MLB, just with the MLB Player’s Association, so there are no team logos in the set. If they did that now with cards (make them with only MLBPA permission), they couldn’t even write “Pirates” on the front/back, but back then it was just the logos that were off limits without compensation. 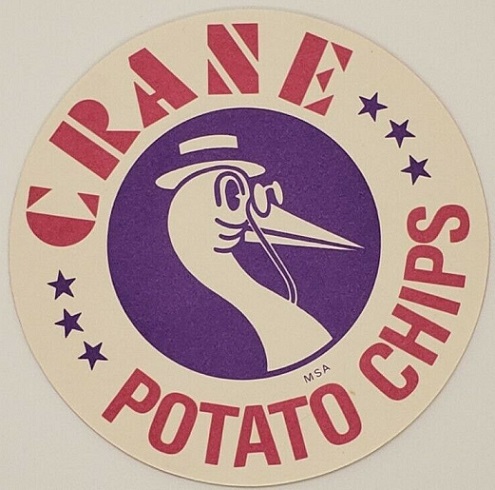 The back is rather simple, just a logo for Crane Potato Chips, nothing else. Everything baseball related is on the front.

Skipping quickly to the pricing section, I’ll note that if you like this disc of Doc Medich, then you don’t need to get one that promotes Crane Potato Chips. There are other ads on the backs, and those cards have four stars on the front in place of the word Crane at the top. There is no difference in price, as this set isn’t popular enough for collectors to pay extra for the different backs. You can grab any of them for around $2-$3 delivered. I picked Crane specifically because someone has a PSA 10 copy for sale with a $23 price tag delivered. Considering how much it costs to grade cards now, it’s not worth it to grade one of these. If it grades less than a PSA 10, you’re losing money in the deal, but even if you get a 10, you’re putting in extra effort for a few bucks at the most.