Today’s Card of the Day is the first appearance for Pittsburgh Pirates pitcher Dave Williams, who was with the Pirates during the 2001-02 and 2004-05 seasons. The Pirates traded Williams to the Cincinnati Reds on this date in 2005 for popular first baseman Sean Casey.

Today’s card comes from the 2001 Bowman Draft Picks & Prospects set. It was a set of 110 cards and you could only buy it as a factory set. A lot of those factory sets got broken up because people were grading the Ichiro Suzuki card, which is still extremely popular today. The Pirates only had three cards in the set, and all of them were pitchers. Williams was definitely the low man of the group, as the other two players were first round picks in Sean Burnett and John Van Benschoten, so they got the attention. Injuries ended up costing all three players time, as Williams had shoulder surgery, Van Benschoten had two shoulder surgeries, and Burnett had Tommy John surgery. All three made starts for the 2004 Pirates.

You could say that the Pirates got great value out of Williams, since he was a 17th round pick. That year (1998) was actually a great year for the 17th round, as eight of them made the majors and somehow all eight had positive WAR value in the majors. The Pirates ended up getting Ty Wigginton and Eric Hinske at one point, so three of the eight played in Pittsburgh. You don’t see that type of success rate in the later rounds. In fact, the third round that year had eight big league players and three of them put up negative WAR. The Pirates pulled off a miracle in that draft by landing four MLB players with their 17th-20th round picks (Joe Beimel, Jeff Bennett and Mike Johnston were the others). That just doesn’t happen, yet somehow it did.

This is a long intro, but there’s not much going on with this card and the pricing section is very short. So here’s the look at card #34 from the Bowman Draft Picks & Prospects set, featuring Dave Williams. 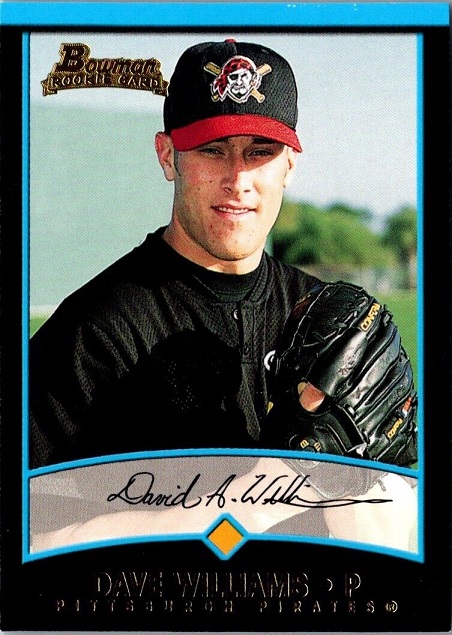 I like the look of this set with the black borders and the facsimile autograph section, though the writing portion at the bottom was not well thought out. It’s tough to see, but it says “DAVE WILLIAMS P” and “Pittsburgh Pirates” under the name/position. The Bowman Rookie Card logo also looks nice. The photos were rather simple for the set, though some were actual action shots. Williams didn’t debut until mid-season in 2001, but this set was released in November of 2001, so his inclusion was based off of a solid rookie season at 22 years old that year. He went 3-7, 3.71 in 114 innings over 18 starts and four relief appearances. The Pirates were awful that year, which explains the win/loss record, despite an ERA that was 65 points below league average.

There’s something on the back that will require you to return to the front scan, so here’s the back scan. 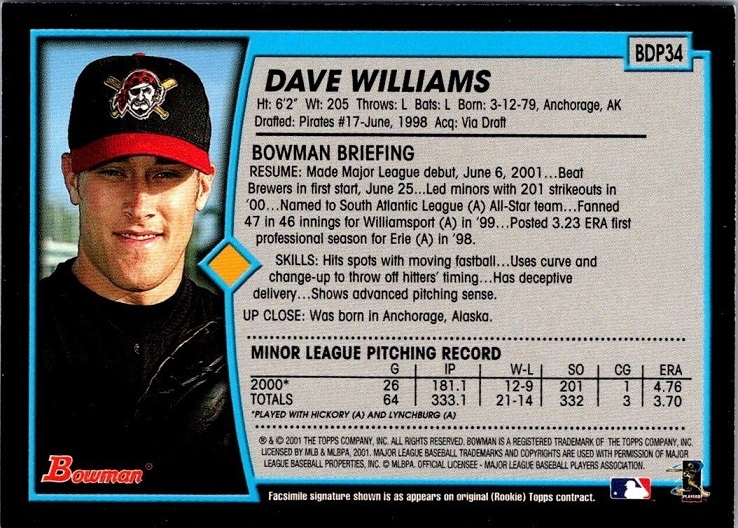 The small print at the very bottom notes that “facsimile signature shown is as appears on original (Rookie) Topps contract”. I really like how that autograph looks, with a screen effect so you can still see the original photo, but that doesn’t distract from the autograph itself.

The back has a nice resume for Williams coming up through the minors. It also tells you about his pitches and how he had success. He had 201 strikeouts in the minors, a number you just don’t see how with limited pitch counts. The Pirates leader this year had 142 strikeouts, and the innings leader was 124.1 IP. Of course, Williams had shoulder surgery not even two full years after that 2000 season ended, so he’s not the best example to use for pitchers being able to handle that type of workload.

With 22 career wins, Williams ranks third all-time in that category among players born in Alaska.

Believe it or not, that front photo isn’t the same as the back photo. It’s about as close as you can get though.

I mentioned that the pricing section is small, so here we go. There are no auctions of note, so just check shipping costs if you want one of these and you can get one for right around $2 delivered from Ebay. There aren’t a ton of options, but some of them have ridiculous shipping charges.