The 1977 TCMA  set called “The War Years” is a hidden gem in the baseball collecting world. It’s a 90-card set highlighting players  from the 1941-45 seasons. It was released in two series of 45 cards each, with the first half coming out in 1977, followed by the second half in 1980. What I didn’t know before today, purely by chance, is that the set covers players who also played every year throughout the war years of WWII.

We covered this set once before for Maurice Von Robays, outfielder for the 1939-43 and 1946 Pittsburgh Pirates. I looked over a bunch of cards from the set that day to get a better idea, but only looked at a few backs. All of the players I saw  that day had at least one year missing from baseball due to service in the war. I then assumed that all of the players missed time due to the war, but today’s featured card proves that assumption wrong.

Hall of Famer Al Lopez caught for the Pirates during the entire war era. He joined the team during the 1940 season, and he was traded away after the 1946 season. In fact, that trade happened 76 years ago today, on what was the fifth anniversary of Pearl Harbor. The war era had a paper drive and that led to almost zero baseball cards produced between 1942 and 1946. That’s five possible years of cards for Lopez on the Pirates that were never made. If I wanted to feature him here with the Pirates, my choices were extremely limited. For now that’s okay, because this is a great set to highlight. 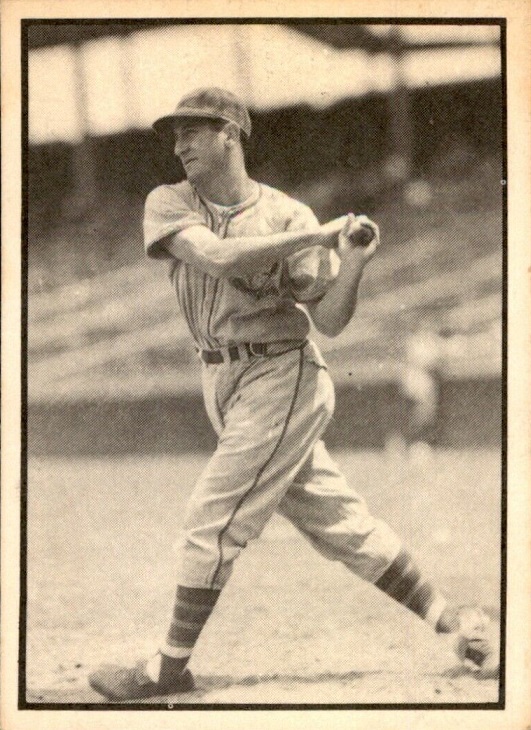 I’ve read that the top people behind the production of TCMA cards were big fans of the 1953 Bowman set. Do a search some time of TCMA cards and you will see a lot that have the same front design that you see above. By design, I mean the cards have white borders, a black frame around the photo, and zero writing on the front, just like the 1953 Bowman set. It’s a very boring design, but it’s good in the sense that the card is now all about the picture of the player. They had some great black & white photos of the players in this set, similar to this one with Lopez on the Pirates. It’s a bit obscured here, but I’m a big fan of those uniforms with the Pirates head logo on the left chest area. 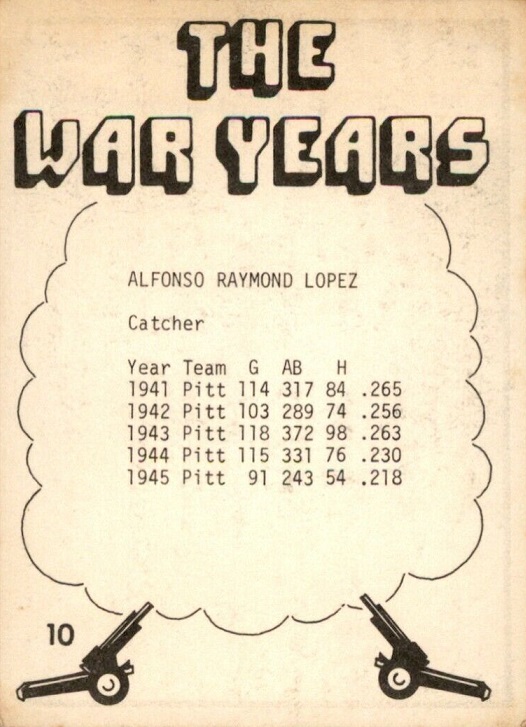 I mentioned it last time, but it’s worth repeating. I did not expect to see cannons on the cards with the stats in the smoke from the cannons firing off. The stats here were extremely basic, with the year, team, games, at-bats, hits and batting average. I only noticed as I was typing up that last sentence that the “BA” used to signify batting average is missing from this card. I looked at three other examples of this card, and I’m assuming once again that this is an uncorrected error. If you can prove otherwise, I’d like to see an example.

If you know this era and you look at Lopez’s stats, they will look a bit odd. Not too many players who played through the war, showed a decrease in production. The quality of play during that time is one of the low points in MLB play due to so many players serving during the war. Lopez has a legit excuse though. He was a 32-year-old catcher in that first season. As the level of play got lower, he got older, and there aren’t too many catchers who played a long time and went out with a bang (pardon the cannon pun).

If you’re interested in this card, I recommend going for the entire set. The cheapest card listed right now is $7 delivered. That’s because there are only three auctions for it right now and one is autographed (and pricey at $90). There aren’t any good full set options right now, but someone recently sold 87 of the 90 cards for $13 delivered.